Hard to believe another twelve months and fifty-two blog posts have gone past. One of my favourite things to do every year is to go over the statistics and see what the top posts were. I laughed a little bit to see that FAA Approved? is in the top ten again for the fifth year in a row.

Some other fun facts:

82,242 people visited the site over the year from 187 different countries for a total of 128,113 page views. One person visited from Vanuatu, which I had never heard of before reading the annual stats report but I now desperately want to visit. Chrome is the most popular browser. Least popular browser is the Playstation Vita Browser with just one single access. Fastest average page load time is Opera followed by Chrome with Internet Explorer in third place. Slowest is Safari. Most popular mobile device was the Apple iPad.

Most users come directly to the site. The most popular single referrer is Reddit. Users referred to the site from Stumbleupon spend the longest time exploring the site (9-12 pages).

The most popular search phrases were: boston john, tipsy nipper, fear of landing and red arrows. Most predictable search: do air hostesses have sex with pilots and variations there of. Most specific search: while you are flying to miami for spring break, the pilot announces that the altimeter on the plane indicates you are cruising at an altitude of 30,000 feet. how does the pilot know your altitude? Most worrying search: why are there police airplanes at night sending some kind of laser light in my bedroom when im sleeping. Most intriguing search: reason for the crash of the dragon plane flying out of the scillies in the 60’s (I will look into this).

The most popular category is Incidents and Accidents followed by History.

And with that, let’s look at the most popular posts of the year. 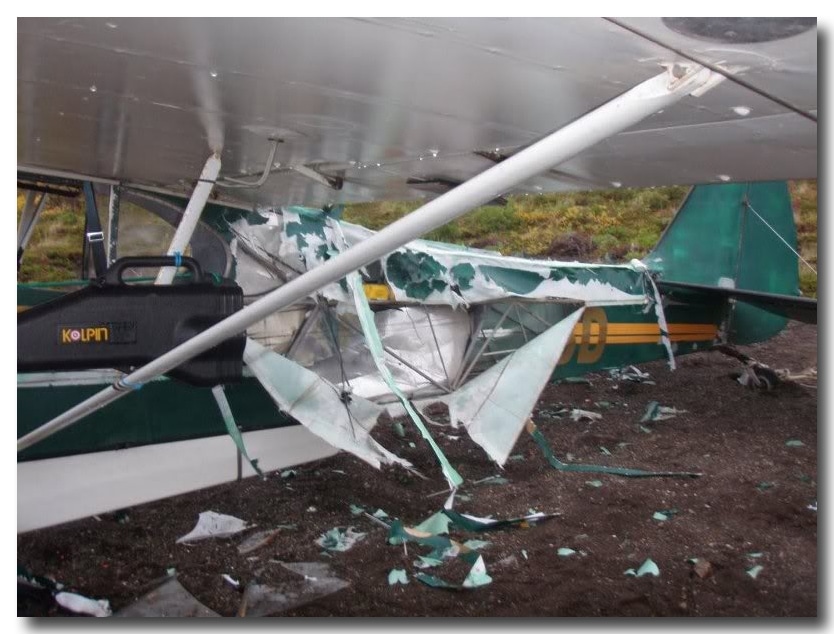 Number Nine: The Amazing Story of the B-17 Flying Fortress

The 398th was a B-17 bomb group in the 8th Air Force 1st Air Division during World War II. The US Eighth Air Force was the largest of the Army Air Forces, engaged in heavy bombing of enemy targets in France, Belgium, the Netherlands and Germany. The Boeing B-17 Flying Fortress was a four-engine heavy bomber aircraft which was heavily used in the strategic bombing campaigns of World War II.

Air Traffic Controller John Melecio, also known as “Boston John,” is one of the most famous ATC controllers today. When he was controlling from Boston Tower, he was always lively and humourous, gathering a following all over the world. Listeners on LiveATC.net posted to the forums whenever he was on air so fans could tune in and hear him live.

The first thing that struck me about this TSB Canada report was the title. Loss of control seemed an odd description and certainly isn’t a cause in itself. The title fits the report, though: loss of control was the key factor in this investigation because to start, that was all the investigators knew. How did the pilot lose control and why did he fly the aircraft into the water at a 45° angle? That took longer to work out.

A few days ago, the General Civil Aviation Authority of the United Arab Emirates has released its final report on the Boeing 747 which crashed on the 3rd of September in 2010 after an uncontained cargo fire.
The 326-page accident report is excellently written and deals with all the issues involved with this tragic flight and an analysis of the situation. Truth be told, it’s hard to think of a more hopeless situation that a modern pilot could find herself in. Here’s a summary of the main points.

3. We’re still at 2,000 feet, right?
In 1972, Eastern Air Lines Flight 401 crashed into the Florida Everglades on approach to Miami. When they lowered the landing gear, the indicator didn’t come on for the nose wheel. The flight crew investigated the problem as the jet circled west over the Everglades at 2,000 feet. The Captain, First Officer, and Second Officer all focused on the problem, and a maintenance engineer on the flight joined them – and not a single one was watching the flight instruments. The Captain accidentally leaned against the yoke and the aircraft entered a slow descent.
There was nothing wrong with the nose gear. A $12 lightbulb in the control panel had burnt out. The First Officer’s final words were, “We’re still at 2,000 feet, right?” as the left wing hit the ground.
You can read the details of the accident here: Eastern Air Lines Flight 401

Number Four: The Story Behind an Unbelievable Photograph

Number Three: How Not to Become a Police Pilot

Apparently, the man became friendly with some pilots at the East Midlands Police Air Support Unit. He told the staff that he was a freelance helicopter pilot and owned his own helicopter. He clearly loved helicopters and was interested in a ride-along with the Air Support Unit, but as no passengers are allowed on police operation flights, it wasn’t possible.

Then they received a brand new helicopter, The Eurocopter 135.

Number Two: How Far Did She Fall? The Amazing Story of Vesna Vulović

This blog post started, as so many do, over a general conversation at the pub. We were actually talking about Felix Baumbartner, the man who jumped from the edge of space last year and made numerous records, including the highest freefall ever.

I remembered there was a woman who held the record for the longest freefall without a parachute, who fell for 33,000 feet and survived. Funnily enough, I could remember the distance but not her name or how exactly she’d managed to survive this unbelievable fall from an aircraft. We had an amusing round of guesses (“She fell into jungle canopy which broke her fall in stages?” “She landed in very soft powdery snow?”) and when I got home, I looked it up.

Number One: Sequence of Events in the Cockpit on Asiana Flight 214

So there you have it, another year with Fear of Landing. I hope to see plenty more of you in 2014!