The Story Behind an Unbelievable Photograph

A reader mailed me this amazing aviation photograph and I knew I wanted to know more. I was surprised at how much I discovered about the photo, which at first glance I thought might be a fake. But the story of who took the photograph and how he managed to get the shot is a good one.

The aircraft is an English Electric Lightning F1. It was designed and created by the English Electric Aviation Company, who’d been contracted to develop a jet bomber at the end of World War II. 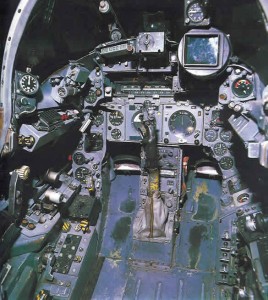 The ER103 design study was sufficiently impressive for English Electric to be awarded the contract for two prototypes and a structural-test airframe. The early prototypes evolved into the Lightning, an aeroplane which was to span the time from when the Spitfire was our primary front-line fighter to the end of the Cold War.

The Lightning was the only British designed and built fighter capable of speeds in excess of Mach 2 to serve with the Royal Air Force.

The aircraft in the photograph was XG332. It was built in 1959, one of 20 pre-production Lightnings. Alan Sinfield took a photograph of XG332 in 1960 at Farnborough:

However, the very last photograph taken of XG332, in 1962, is deservedly the most famous one. How does someone manage to take a photograph like this? Planning, quick wits and a healthy dose of luck.

As it happened, Bob Sowray didn’t fly the Lightning that day. The pilot was George Aird, another test pilot working for De Havilland.

George Aird was involved in the Red Top Air-to-Air Missile programme and seems to have been a well-respected test pilot.

I found this a video of Aird in 1984 preparing and flying a DH Mosquito RS712. It’s one of the few videos I’ve seen that shows as much of the pilot as the plane!

But let’s get back to the story of the photograph on the 19th of September in 1962. That day, George Aird was in the Lightning doing a demonstration flight off of the south coast. He was approaching Hatfield from the north east when he realised there was trouble.

The aircraft pitched up violently just as Aird was coming up to land. Aird lost control of the aircraft and ejected.

Luckily, because the nose pitched up he had just enough time to eject.

The tractor in the photograph was a Fordson Super Major. If you look closely at the grill, you’ll see it reads D H Goblin, as in the de Havilland Goblin jet engine.

The tractor driver was 15-year-old Mick Sutterby, who spent that summer working on the airfield. He wasn’t posing for the camera. In fact, he was telling the photographer, Jim Mead, to move on, because he shouldn’t be there.

Mead saw the plane coming in and the nose pitch up. Then Aird ejected and Mead says he had just enough time to line up the shot as the Lightning came down nose first.

Here’s an email from Mick Sutterby the tractor driver, sent to John Palmer, which was posted on The Funny Noise.

I followed my father into work at de Havilland, Hatfield in 1954 when I was 15. My father was the foreman in charge of the aerodrome and gardens. My job in the summer was gang-mowing the airfield and at the time of the crash in 1962 the grass had stopped growing and we were trimming round the ‘overshoot’ of the runway with a ‘side-mower’.

I stopped to talk to a chap with a camera who was walking up a ditch to the overshoot. I stopped to tell him that he shouldn’t be here, I heard a roar and turned round and he took the picture! He turned out to be a friend of the pilot and had walked up the ditch to photograph his friend in the Lightning. I saw some bits fly off the plane before it crashed but it was the photographer who told me he had ejected.

There was not a big explosion when it crashed, just a loud ‘whhooooof’. I was about 200 yards from the crash scene. I saw men running out of the greenhouses and checking the scene of the crash. The works fire brigade were on the scene within a minute. Somewhere at home I have a picture of it burning. Although the picture shows it nose diving to the ground, in fact it was slowly turning over and it hit the ground upside down nose first.

I was later told that if the pilot had ejected a split second later he would have ejected himself into the ground. I was very lucky. If I had known he was coming into land, I would have been positioned near the ILS (Instrument Landing System) aerial which was only 20 yards or so from the crash site! I believe the photographer had his photo restricted by the Air Ministry for – I think – about 3 months because the plane was secret.

He then took it to the Daily Mail who said it was a fake. The photo was eventually published by the Daily Mirror. From there it went round the world, and I remember seeing a copy in the RAF museum at Hendon. I recollect the photographer usually photographed hunting scenes for magazines like The Field. I recollect that the pilot broke his legs but really was very lucky. I hope this is interesting. All from memory!

Meanwhile, George Aird landed on a greenhouse and fell through the roof, breaking both legs as he landed unconscious on the ground. The water from the sprinkler system for the tomatoes woke him. He’s reported to have said that his first thought was that he must be in heaven. 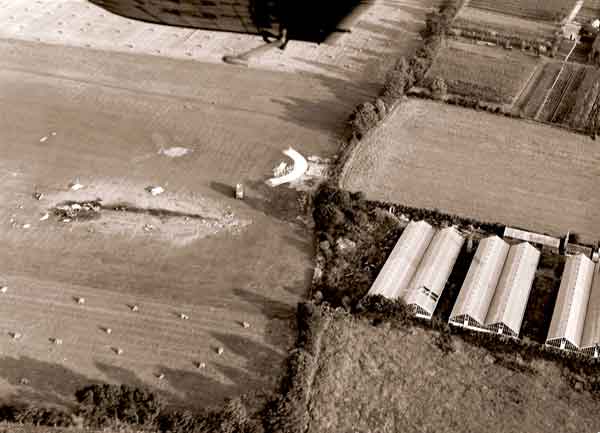 George landed in a greenhouse sustaining several fractures. The hole where George and the ejection seat went through the glass roof can be seen in the above picture in the near end of the roof of the second greenhouse from the left. They landed in adjoining rows of tomatoes! The damage at the far end of the greenhouse was made by the arrival of the Lightning canopy. The remains of the Lightning can be seen on the left just into the airfield. George was back flying again within six months and on Lightnings a year after the accident.

The photographs taken that day first went to the Ministry of Aviation. Once they were released, Mead sold them to the Daily Mirror.

It was featured as a centre page spread in the newspaper on the 9th October 1962.

Jim Meads is a Mirror reader who was trying to amuse his two children, Paul, 4, and Barry, 3, by taking a picture of them as the Lightning was coming in to land at the De Havilland airfield near their home at Hatefiled, Herts.

The Daily Mirror paid Mead £1,000 for the rights to the photograph: £18,000 by today’s standards. In my opinion, he deserved every penny.

If you found this post interesting, you might like to pick up my “CSI for aviation enthusiasts” series on modern aviation incidents and accidents, Why Planes Crash.