This might destroy my street cred, but I’m not going to lie: I loved Top Gun: Maverick. Yes, it is effectively military fan fiction. Yes, it was odd that they kept talking about “there’s a 5th generation fighter out there” to avoid naming a plane to keep the enemy anonymous. Yes, it was silly and over-the-top, and yes, it was relentlessly sentimental. Even so.

But sometimes, the desire to sing along and be a part of something so very Hollywood isn’t a good one. This video appeared on social media site TikTok recently and quickly went viral. I’ve created a local copy in case the video gets taken down, which quite honestly it should.

In it, we see a passenger in an aircraft recording “zero gravity” to the tune of Kenny Loggin’s Danger Zone as the world turns upside down and a pair of sunglasses float past. This is followed by a clip with her in the front and a passenger sleeping in the back. As the aircraft enters a sudden steep turn, the passenger is flung to the side. The next caption, white against a dark sky, says “Barrel Roll”; then the city lights come into view as the aircraft inverts.

The clip of the aerobatics at night was posted to Instagram on the 2nd of January 2019, with a soundtrack of the passenger screaming in delight as if on a roller coaster.

If you are reading this in your email, you may need to click through to the website to play the video.

Based on this photograph from the same set, it does not seem like it would be difficult to identify the aircraft. 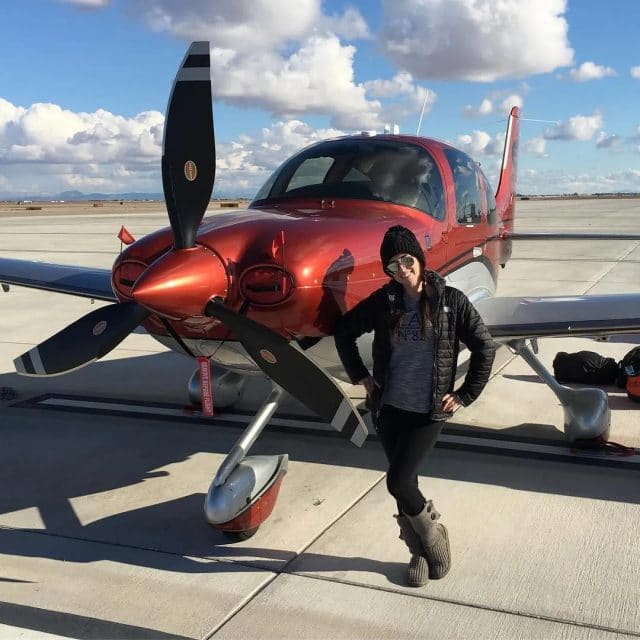 The Cirrus SR22 is a single-engine aircraft with four seats. It may seem like it comes up a lot when it comes to silly manoeuvres but, to be fair, it is the best-selling single-engine aircraft and so bound to collect more than its fair share of dangerous pilots. The SR22 has a parachute system (CAPS) meant to safely bring the aircraft down in an emergency. It is not certified for aerobatic operations.

The poster (who has since clarified that she was only a passenger and never in control of the aircraft) identifies the manoeuvre as a barrel roll. Now, I’m not sure what the pilot attempted to do but what he ended up with was definitely not a barrel roll. It seems more likely that the pilot intended to fly an aileron roll.

For an aileron roll, the pilot applies full aileron in one direction as the wings turn vertical. If the aircraft is travelling fast enough, then the airspeed keeps the aircraft flying despite the lack of lift. The pilot continues the roll while applying rudder in the direction of the bank as the aircraft inverts and then rolls back to straight and level.

A barrel roll, originally known as a “side somersault”, is a combination of a loop and a roll. The most famous barrel roll is almost certainly when the test pilot Tex Johnston rolled the prototype for the Boeing 707 while demonstrating the aircraft to VIP representatives from the Aircraft Industries Association.

An aileron roll, if properly executed, only exerts a very light positive g-force and should not cause stress or strain in an aircraft designed for aerobatics. It probably would not cause undue stress on most aircraft. The Cirrus SR22, however, is not even rated for a turn with an angle of bank that exceeds 60° (a standard steep turn).

We don’t know what the pilot actually aspired to as we have only the passenger’s description. But either way, the manoeuvre was not executed correctly, starting from the passengers not belted in and not wearing parachutes (although, to be fair, at least the aircraft was wearing one) to the floating sunglasses to the clear slipping at the end of the roll.

It would appear that the pilot is attempting to teach himself aerobatics in a plane not rated for aerobatics with passengers on board and at night.

There is a post on the r/flying subreddit about this and I thought this CFI put it well.

My absolute favourite comment there is from a poster who is identified as an Aviation Safety Inspector (GA Ops) who simply posted an emoji of a detective with a magnifying glass:

However, as the videos were taken some time ago and reposted as a compilation, it seems unlikely there will be any action.

Meanwhile, on Tiktok, the passenger initially complained that commenters were “wanting to take the fun out of everything” but has now pinned a new comment to the post:

This video was from a random invite from over 3 years ago. I’m not the pilot. I’ve never been a pilot. I had no clue how dangerous this was.

The only saving grace of her compilation is that the SR22 is distinctive enough that the video may dissuade from accepting an invitation to enjoy a pleasure flight with that pilot.

Many people like to put down social media video sites such as TikTok and YouTube, but I strongly suspect the FAA love them for making their job so much easier.