It was the 13th of November, 2011. Two pilots were flying a rented Cirrus SR22, on their way home from the Stuart Air Show at Witham Field in Martin County, Florida. The pilot in the left seat was a 23 year-old private pilot. In the right seat, was a 34-year old commercial pilot whose family says had over 6,000 hours experience. The pilots were cousins and best friends.

About 10 miles south of Witham Field, they saw a Sukhoi SU-29 and an Extra-300 flying in formation, piloted by friends. The Cirrus SR22 joined the formation and the planes proceeded southwest.

Shortly after the flight crossed the northern border of the Loxahatchee National Wildlife Refuge, the pilot of the Su-29 observed the accident airplane’s pitch smoothly increase upward to an angle of about 30 degrees. The airplane then began a roll to the left, and pitched nose-down as it rolled to an inverted attitude. As the airplane descended, it began to roll right, before it impacted the marsh below in an approximate 80-degree nose-down pitch attitude.

The pilot of the Su-29 contacted air traffic control as he orbited around the wreck. It was already clear that neither pilot could have survived. 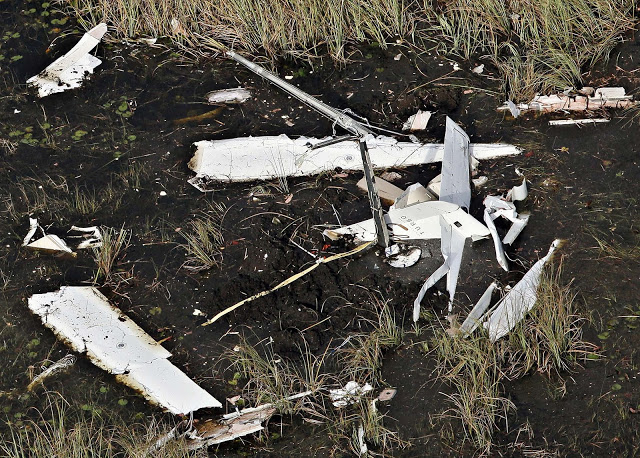 A man walking his dog saw the three aircraft which flew overhead at a low altitude, less than 1,000 feet above the ground. The FAA confirmed this with radar data, the SR22 was flying at a recorded pressure altitude of 521 feet.

Local news coverage the day of the crash:

He was described as “a really good stick” and an “adrenaline junkie” and was clearly well-liked within the group.

He’d obtained his private pilot certificate in 1996 and then gave it up in 2006, when he submitted a “letter of surrender” to the FAA, abandoning his commercial pilot certificate. The reason for his surrender was “in anticipation of FAA certification action” but the FAA file contained no further details or even any reference to incidents that might have led the pilot to expect action.

The SR22 was rented in his name from 11-13 November for personal use. As a part of the rental agreement, the right-seat pilot agreed that the aircraft would not be used or operated by any other person. This, combined with the pilot’s experience and statements by witnesses, has led the NTSB to state that it was “most likely” that the right-seat pilot was in control of the aircraft. 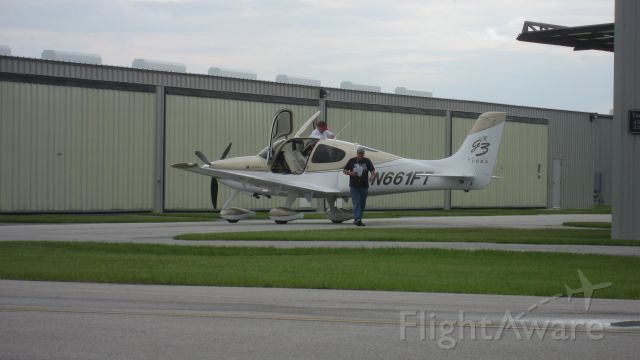 The Cirrus SR22 is a single-engine four-seater and is currently the world’s best-selling single-engine aircraft. The SR22 is best known for the Cirrus Aircraft Parachute System (CAPS) which lowers the aeroplane slowly to the ground in the event of loss of control or other in-flight emergencies. The accident aircraft, registration N661FT, was operated by Air Orlando Flight School as a rental aircraft.

A Blackberry mobile device found in the wreckage had photographs taken that day. The final four photographs were taken from the aircraft directly before the crash.

A witness on the ground saw the aircraft shortly before the crash. He was standing with an acquaintance when they heard several loud and low airplanes.

Another witness said that he’d observed two or three low wing aircraft flying southwest in close formation. He said one of the airplanes did a barrel roll before he lost sight of the formation behind trees.

A barrel roll. In a Cirrus SR22. Let’s just make sure this is clear: the Cirrus SR22 is not an aeroplane meant for loop-de-loops. It is neither certified nor designed for aerobatic operations, nor even for turns where the angle of bank exceeds 60°. For an aileron roll, you pull the aircraft into a 90° bank. I mean, you don’t. I don’t. We wouldn’t do this in a plane which isn’t made for it. But it seemed the pilot of the SR22 that day did.

On November 11, 2011, two days prior to the accident flight, the airplane departed BCT at 1654 and climbed to an altitude of about 2,000 feet, before beginning a shallow descent to 1,800 feet. At 1658, the airplane began to pitch up and roll to the left, reaching about 30 degrees of nose-up pitch and completing 360 degrees of roll. The airplane then continued to FA44, and landed at 1701.

After they departed SUA, they climbed to 1,000 feet but the flight recorder showed that at 17:34, the flight descended, with a GPS altitude of 161 feet and the measured pressure altitude was 0 feet. Over the next few minutes, the GPS altitude varied from a high of 195 feet to a low of 38 feet.

Beginning at 1736:18, while flying at a GPS altitude of 61 feet, the airplane began a roll to the left that reached a maximum bank angle of 66 degrees about 4 seconds later. The airplane then began rolling back to the right, and at 1736:19 reached a maximum right bank angle of 70 degrees, after climbing to a GPS altitude of 308 feet. At that time, the recorded pressure altitude was 109 feet. The airplane returned to a relatively level roll attitude about 4 seconds later.

Then the aircraft descended again, reaching a low GPS altitude of 145 feet (the pressure altitude was an invalid negative number).

The pitch angle then began to increase, reaching a maximum of 27 degrees nose-up at 1736:36, at a GPS altitude of 129 feet, and a pressure altitude of 29 feet. Within 2 seconds, a left roll began that continued past 90 degrees, and as the roll increased, the pitch angle also began to rapidly decrease. As the airplane reached 178 degrees of left roll, the pitch had decreased to 30 degrees nose-down, at a maximum pressure altitude of 353 feet. The airplane then began to descend, and the pitch continued to decrease to 67 degrees nose-down one second later, as the roll transitioned past inverted to 138 degrees of right roll. The final recorded data point, one second later, showed the airplane in a 68 degree nose-down pitch attitude and a 42-degree right roll, at a pressure altitude of 205 feet and an airspeed of 156 knots.

That can be hard to visualise but COPA safety have done an excellent video based on the data. The following shows the aerobatics performed in the SR-22 over the course of these two flights and the accident flight:

One of the pilots of the aircraft said that he’d heard that the right-seat pilot had “rolled the Cirrus” in the past but had never seen him do it. But he’d never logged aerobatic flight hours and was not known to have aerobatic experience. Maybe if he had, he’d have better understood the stresses he was putting the aircraft under.

It’s possible that the lack of a harness was the final straw which caused the right-seat pilot to lose control of the aircraft. At that height, in that aircraft, he had no chance of recovery.

The National Transportation Safety Board determines the probable cause(s) of this accident to be:
The right seat pilot’s decision to attempt a low-altitude aerobatic maneuver in a non-aerobatic airplane.

The parachute was found in a bag near the wreckage. The ballistic recovery parachute system activated on impact. However, even if one of the pilots pulled the handle to activate the parachute, it wouldn’t have made any difference, not at that height.

If you are interested in air crash investigations, you’ll probably enjoy my e-book, Why Planes Crash.

PS: If you don’t have an e-book reader and would prefer the book in PDF format, just email me at [email protected] and we’ll work something out.