Have You Ever Flown a Barrel Roll at Night?

On the 14th of February in 2010, a private jet disappeared from radar in German airspace eleven minutes after taking off for a routine ferry flight from the Czech Republic to Sweden.

I wrote a short piece about this accident a few years back but the accident report hadn’t been published yet. Now that I’ve finally read the final report, however, I feel this is worth revisiting.

The aircraft was a Cessna 550 B Citation Bravo: a corporate jet popular for its additional size (seating 10 passengers) and longer range. The last Citation Bravo was produced in late 2006 and are still in use. I’m pretty sure I have at least one reader who regularly piloted the aircraft as a part of a two-man crew.

This particular Citation Bravo was owned by a Czech operator who offered private business flights. The aircraft was five years old with 1,830 hours of flight time and 1,686 cycles. There were no known issues with the aircraft and it had the required equipment for IFR flights.

On the 14th of February at 19:46 local time, the aircraft returned to Prague from France in what had been the first flight of the day for the captain. The first officer of that flight left after landing, replaced with the first officer of the accident flight, who had flown two other flights earlier. Both pilots were within their duty times and had flown just a few hours that day. There’s no reason to believe either pilot was fatigued. There were no negative reports regarding either pilot on file.

The captain was 27 years old with 1,700 hours flight time and was described as having good flying performance and adept with new technologies. Having made the position of captain very quickly, the operator initially scheduled the pilot to fly with more experienced co-pilots to gain more experience in business aviation.

The first officer was a 32-year-old pilot with 1,600 hours flight time. The first officer was said to have wanted to fly combat aircraft but did not qualify, so acquired his PPL privately in the USA before continuing training in the Czech Republic to complete his commercial licence.

The two prepared for the ferry flight from Prague to Karlskrona, Sweden. There were no passengers nor cabin crew and the flight promised to be straightforward.

They departed Prague from runway 31 at 20:08 local time for the night flight. The first officer was the Pilot Flying. He flew manually, not bothering to engage the autopilot as they made a right hand turn in the climb and proceeded north. They quickly rose above the clouds into the dark, moonless night.

At 20:14, still in the climb, the flight crew discussed the flight… but perhaps not in the way one might expect.

Note that I have translated their discussion from the German myself. You can read the BFU’s English version of the report here but the conversation is stilted and includes grammatical errors which are not present in the German version in the original report. The German discussion, however, also includes odd phrasing. There is never any explicit mention of what language the flight crew were speaking to each other. Normally I would simply assume that the quoted speech was German if not otherwise mentioned, and it’s true that many Czechs speak German, but working for a Czech operator, it seems just as likely that they were speaking Czech. Certainly, I find it worrisome that both the German and the English reports simply quote the conversation as direct speech without reference to language at all.

Anyway, that said, here’s the conversation as per the German report:

Captain: I haven’t flown at night for a long time.

First Officer: Have you ever flown a [barrel] roll at night?

Actually, in German, the answer given to the question is somewhat ambiguous, which I suspect was intentional. ‘Ja, wirklich’ is adamant but it could equally mean Yes, of course I have! or How could you ask such a question? So it’s not surprising that the first officer appears to have taken it as resistance to the idea and backs off.

First Officer: Better if we don’t.

The two are clearly being careful as they sound each other out. As neither pilot raises an objection, the idea of attempting a roll in the aircraft is taken more seriously.

First Officer: You’re the first that I’ve told, don’t say anything to [unintelligible]

Captain: Who shouldn’t I tell?

The first officer doesn’t respond. He’s already in too deep. But the captain takes the next step.

Captain: I do it all the time, but I have to convince [unintelligible] to do it

First Officer: The Bravo does it better.

ATC interrupt their conversation and instruct the flight to climb to FL260 (26,000 feet) to waypoint DEKOV but the flight crew are too distracted to respond.

The Citation Bravo, for the avoidance of any doubt, is not designed for aerobatics. There is no such thing as an aerobatic certificate for the aircraft. The Primary Flight Display uses gyroscopes for orientation which would stop working correctly at pitch levels between +/-85° and +/-95° (i.e. the aircraft at almost a right angle in relation to the horizon), making the display unreliable. It’s a business jet, for goodness sake.

The first officer clearly feels differently about this.

First Officer: The Bravo makes for a faster roll with the ailerons but the spoilers are slower.

ATC repeats the instruction. This time the captain responds to acknowledge. And then the cockpit is silent for a minute or two.

At 20:17, nine minutes since their departure, the Citation Bravo which should be on a direct northerly course, banks 30° to the left and then 20° to the right before straightening out again.

The Captain breaks the silence.

ATC instruct the flight crew to contact ATC Munich, which the captain acknowledges before speaking to the first officer.

The captain contacts Munich who instructs the flight to climb to FL330. As they initiate the climb to their new level, the captain spoke.

Captain: Enough, is it enough?

First Officer: [Enough] for what?

First Officer: For what?

There’s little doubt as to what they were referring too. It seems a bit late to avoid saying anything on the Cockpit Voice Recorder but maybe the decision to actually do it made the flight crew feel more cautious about leaving a trace.

The weather was cloudy with a cloud base at 2,000-3,000 feet above mean sea level but the cloud tops maxed out at FL60. At 27,000 feet there were no clouds and no significant weather. There was also no moon and no distinguishing features to be seen.

It was just ten minutes since they’d left Prague.

The Citation Bravo broke off the climb to FL330, levelling off at FL270. Almost immediately, the aircraft began a slow roll to the right. Four seconds later it was upside down and then in four seconds again it rolled another 90°. As it did, the heading began to vary, first towards the east and then towards the south and finally towards the west. At the same time, the pitch angle decreased to -85°. The rolling aircraft had gone into a nose dive.

They found the wreckage in the snow-covered forest in Saxony near the Czech border. The rising terrain is mentioned although I’m not sure how much that matters considering they’d started at 27,000 feet and still ran out of sky.

The impact crater was 16 metres across (52 feet) and two metres deep (6½ feet) with heavy wreckage thrown as far as 120 metres (400 feet) from the main impact site. The snow around the accident site was soaked with fuel. The aircraft was so broken up, only the engines, the two main landing gears and the tail section could be identified.

The investigators collected all the parts and recreated the aircraft as best they could at the BFU hangar in order to verify the structural integrity of the aircraft.

Unbelievably, they were able to prove that, although the Citation Bravo was never designed for the structural loads of aerobatics, the aircraft kept its structural integrity until the crash into the snow. The only thing that had gone wrong was the pilots. 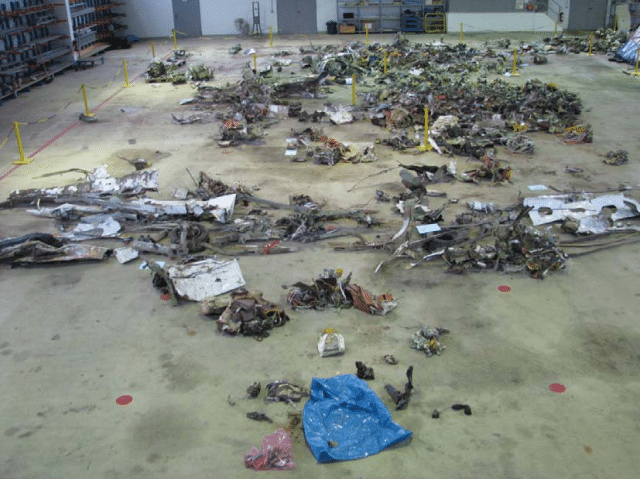 The cause of death was cited as the extreme destruction of both bodies in impact. Their remains were soaked with fuel, making a toxilogical examination impossible. There were no rescue aspects investigated as the crash was clearly not survivable.

When I originally read the special bulletin, I found myself surprised by my own bias. I’d simply presumed that it was two young men who would be tempted by such reckless actions but the 27 year old captain of the flight was a woman.

Again, I want to clarify that I have worked from the German BFU report but the cockpit conversation isn’t quite right even there. It really bothers me that the report never makes any mention of the language or the odd phrasing at all.

The crew tried to conduct a flight manoeuvre (roll) which is not part of commercial air transport.

I shouldn’t smile but that really is such a stereotypical German way of putting it. Barrel rolls definitely are not a part of commercial air transport!

The crew suffered loss of spatial orientation and subsequently did no longer have the ability to recover the flight attitude.

It’s eye opening to see just how quickly they lost spatial orientation: just four seconds before it started to go belly-up, quite literally.

The contributing factors are about what you’d expect…

The pilots were not trained in aerobatics.

The first recommendation of the BFU was that every aircraft belonging to the air operator should be inspected for structural overload, as the conversation between the two pilots clearly implied they had each done this before.

In addition, the BFU recommends that the Czech aviation authority should determine actions for Czech air operators’ safety culture. This sounds rather vague but it comes down to the fact that neither pilot considered that attempting the barrel roll in a dark moonless night in a business jet not rated for aerobatics was a stupid idea. The two don’t even consider the safety aspects, other than the question of whether they have enough altitude. This is an issue of human factors and cockpit culture.

The BFU reports that both safety recommendations have been implemented and the operator in question has established a quality and safety management system. One which hopefully advises its pilots not to attempt aerobatics manoeuvres which they are not qualified for in company aircraft. In the dark. I’m not sure I can say that too often. Don’t do that.