Flying into the Storm 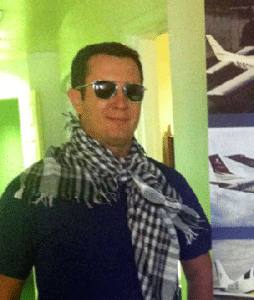 Ken White is a flight instructor at Tailwheels in Florida and an amazing pilot. The son of a pilot and A&P mechanic, he’s spent time in the U.S Air Force as a cargo transportation specialist, contingency response group (CRG) member, and currently serves with the Florida Air National Guard as a jet propulsion technician for F100 series engines. Ken earned his flight ratings by being the jack of all trades at just about every airport he’s been around. From pumping 100 low lead and Jet A on the flight line, to serving tables at airport diners, he’s built his time and reputation one hour at a time. He completed the restoration of a well-abused Cessna 150 in 2009 and has been behind its yoke ever since.

He’s also brave enough to admit when he makes a mistake. Here’s his story of flying VFR as a low-hour pilot into bad weather while under pressure to get home. First let’s set the stage. I fly in Florida and at the time, might have had about 200 hours total, just enough to feel slightly invincible. I was flying an old school Cessna 172 Skyhawk with a STOL kit (short take off and landing modifications) that I had come to love. I can park that plane anywhere. Onboard were myself and the girlfriend. We had just flown down to Venice, Florida for some sun and surf as the beach and Sharky’s, a great restaurant, are a short walk from the airport.

Now let’s talk about Get-home-itus and how it can make you do some really stupid things. We’d finished dinner and were on our way back the field. The restaurant faces south south west so you get one hell of a sunset with your meal. That being said, as one would expect, it’s very dark when we get back to the airport. I had noticed some off-shore lightning on the walk back but didn’t think much of it. However the lightning that did get my attention was north and east of the field.

I spin up the GPS and sure enough, there are three cells in the previous mention directions forming up a nice horse shoe around central Florida but wide enough that we might make it back before they roll over the airport. My instincts are screaming at me, DO NOT FLY THIS OUT! The girlfriend, on the other hand, was extremely concerned about getting home as she had to work in the morning. She had started a new job and was ultra-concerned about making the right impressions…yadda yadda. Long story short, I gave in and we jumped in the hawk.

Right off the bat I knew this was a bad idea. We took off down wind (only four knots by the AWOS) to avoid flying over the black hole of the gulf of Mexico and to avoid the storm already closing in from that direction. So, long take off roll, reluctance to climb. Otherwise smooth. I expected this. I’m on the horn with Tampa ATC and immediately notice the surprise in the controllers voice that anyone would even be out in these conditions. Should have been a clue. I’m getting vectors north around the cells and thinking everything’s relatively cool although I can see lighting in all four directions. Ok, getting my attention but not sweating it yet.

ATC calls up and tells me he needs a turn to 090 to clear the way for a Mooney on a long 15 mile straight in final to Sarasota. Another invincible soul who thought he could sniff his way through the CB (cumulonimbus) clouds that night. This is when alarm bells start a faint whisper in my ear. Here’s another aircraft getting a 15 mile final straight into an airport. 15 miles out. I suppose it crossed my mind that if he can’t make a turn, or setup for a local pattern or approach then something must be very damn wrong with the weather since he hasn’t declared an emergency. ATC tells me that the nearest cell to me is 20 miles away and he will get me turned back on course before I get too close.

I’m about to learn a very important lesson about what ATC can and can’t see on their radar scopes. 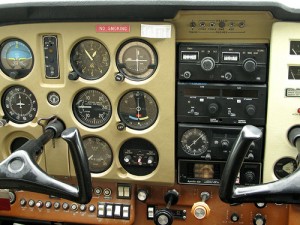 Radar can only reflect falling precipitation. It can’t do anything for you as far as clouds are concerned and the sweeps are a bit delayed from reality. So what seems like a wide open hole in the sky could actually be a filled with all kinds of nasty weather.

I turn to 090 blindly accepting that ATC has the world completely under control. I’m at 2,500 feet at the time. Just as I roll level the world outside the window goes completely black. I’ve just flown into a wall of cloud and I’m completely in the soup. I immediately tell Tampa what’s going on and roll back into a left turn, intending to 180 out of there. Tampa is actually a lot more concerned about this as I am and starts rapid firing instructions to do exactly what I was already doing. I’m completely glued to the instrument through this. The outside world is starting to deteriorate rapidly however, the plane is getting bounced and is starting to roll uncommanded by the pilot.

Just as I break out we get hit. It must have been a downdraft just breaking over the crest of the cumulonimbus clouds it came from but it hit the Skyhawk full broadside while we were in a 30 plus degree bank. The bottom suddenly fell out from under the plane. The girlfriend is death-gripping the sides of her chair and the only part of the world I can even recognize are the instruments in front of me. The most alarming of which is the vertical speed indicator showing a 2000 feet per minute descent correlated by an altimeter which is spinning off just as rapidly…things have gone very very south. 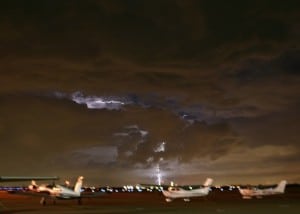 The plane is still getting buffeted but I finally get her to level off around a grand, wings level and somehow under Va speed. I had just lost 1500 feet of precious altitude in the span of a few seconds. I have a white knuckle grip on the yoke and a laser focus on the panel in front of me. The rest of the planet as far as I’m concerned does not exist. Calm as a coma I key the mike and ask Tampa for a straight in to Sarasota, I’m completely done with this flight and want nothing more than to be on the ground. I get the request, switch to tower and make the smoothest landing I’ve ever performed in my flying career. I didn’t even realize I had landed, the wheels just started rolling. After I taxi and shut down I finally look to my significant other in the right seat. She’s completely pale, and still white knuckling the chair in both hands, and simply mutters “Nice landing”

We managed to get home later that night after waiting a solid two hours for the surrounding convection to burn off. Lessons learned were stark and profound:

Category: I learned from that,