In 2015, the Utah Department of Public Safety reported that one of its helicopters nearly crashed during a recovery operation in Draper UT.

The NTSB report reference GAA15CA258 and the raw video were released in 2016 but I’ve only just seen this, thanks to the excellent feed of aviation videos run by What You Haven’t Seen.

A hiker had been reported missing in Corner Canyon. Searchers were dropped off by helicopters using one-skid operations (more on this below) and, after a night-search, he was found in the morning near a hiking trail called Jacobs Ladder, in “remote and nearly vertical” terrain. The hiker had fallen and was pronounced dead at the scene. The Utah Department of Public Safety arranged for a ground crew and helicopter to recover the body.

The helicopter was an Airbus (Eurocopter) AS350, registration N253HP with two on board, the pilot and a tactical flight officer. In order to meet the rescuers on a cliff ledge, they attempted a one-skid recovery or “skid load”.

The one-skid manoeuvre is where the helicopter rests one skid on a narrow surface (in this case a rock ledge) while continuing to hover. A one-skid recovery is used when there is not enough space/flat ground in order for the helicopter to touch down properly.

From the Mountain Rescue Association’s manual Helicopters in Search and Rescue Intermediate Level (2008):

In certain situation, pilots and rescuers may choose to perform a hovering or one-skid recovery of a rescue victim.

The factors to be taken into account in selecting a site for a hovering recovery are generally the same as those for selecting a helispot. In these conditions, a smaller ground area, rougher terrain and steeper slope are permissible. On the other hand, it is extremely important that there be plenty of room for both the main rotor and the tail rotor boom, since the pilot may have to turn the helicopter in the event changes in wind direction. An experienced hand signaler, one that the pilot knows is competent, should be at the site and all ground personnel should be within the pilot’s view, if at all possible. In the case of one-skid recoveries on rock outcrops, this may be impractical.

The three-person recovery team used a rescue rope to lower the fallen hiker to a ledge where they could meet the helicopter. The helicopter hovered above them and then descended to bring the right skid onto the outcrop. The team approached the helicopter in order to load the litter.

Clearly, this is a critical phase of flight however you slice it. The narrative of the incident quotes the manual on Situational Awareness by the Mountain Rescue Association:

Situational Awareness requires the human operator to quickly detect, integrate and interpret data gathered from the environment. In the case of search and rescue operations, the “human detector” can be anything from the incident commander to a “field grunt.” That is the beauty (and challenge) of Situational Awareness – it requires and demands awareness by all users.

Unfortunately, situational awareness was not a high point of the operation that day. A rescue rope was anchored on the steep terrain above them and one of the ground team was attached to it. As the rescue worker approached the helicopter, the rope was pulled taut and was caught by the main rotor blade, about ten inches from the tip. The cut rope was then pulled back by the main rotor and struck the tail rotor before flying back uphill towards the rescuers who were on the slope above the ledge.

This image apparently shows the initial damage done by the safety rope. 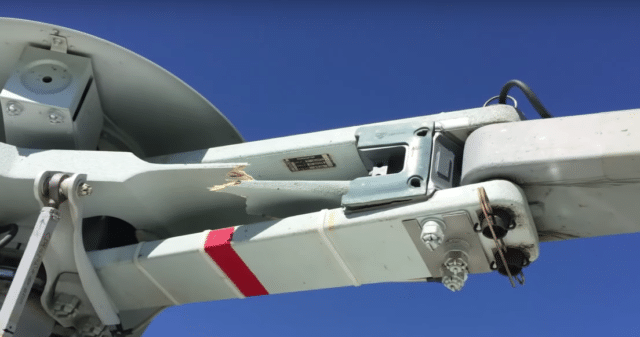 The aircraft rotated abruptly to the left. It began to shake violently and the tail struck the cliff face. The tail flew over the heads of the rescuers and into the cliff wall. The tactical flight officer was thrown out of the open door of the helicopter but caught by his harness and safety line.

The helicopter was described as ‘spinning towards the ground’ but somehow the pilot managed to regain control and flew to lower terrain where he could land upright. As he applied the power to land, the helicopter began shaking violently again until he touched down and reduced the collective pitch. Once safely on the ground, they found that the helicopters main rotor system had been damaged by the rope, with the resulting spin damaging the tail boom and the empennage.

What You Haven’t Seen has also put up the raw video without the pauses/slow motion views so that you can see it unedited.

Helicopters provide an outstanding rescue tool, but they have specific operating limitations. Recognize that the consequences of a poorly managed helicopter rescue can be swift and fatal. Rescuers need to understand these limits and have the professional discipline not to exceed them during an emergency. As accident investigators repeatedly conclude, “self-imposed psychological pressure” causes us to make poor decisions when adrenaline clouds our judgment. Poor decision-making is preventable yet, tragically, it is a factor in the vast majority of helicopter rescue accidents.

What’s particularly frustrating about this case is that this was not a search and rescue: the hiker had died in the fall. There was no need for the crew to risk their lives for the rescue.

The National Transportation Safety Board determines the probable cause(s) of this accident as follows:

A special thank you to a Fear of Landing reader who pointed me at the video posted by What You Haven’t Seen along with the NTSB reference number. Thank you Tammy!