Earlier this month, on the 11 of February 2018, an Antonov An-148 disappeared from radar shortly after take-off from Moscow’s Domodedovo airport. The aircraft was operated by Saratov Airlines for domestic flight 703 and was carrying six crew and 65 passengers. The wreckage was discovered near Argunovo village, about 125 km (78 miles) south of the airport.

Modern media interest in crashes led to several false pieces of information being disseminated, including that the aircraft had suffered an in-flight break-up and that there was evidence of a mid-air collision with a helicopter run by the Russian post office. Authorities quickly released photographs of the crash site with the details that there was no sign of any wreckage other than the Antonov An-148 (the scattered mail was from a bag being transported by the An-148) and that the aircraft was intact until impact. They also confirmed that the Flight Data Recorder (FDR) and the Cockpit Voice Recorder (CVR) had been found.

Following up on this fast dissemination of news, the Russian Interstate Aviation Committee (Межгосударственный авиационный комитет, commonly referred to as МАК) released a preliminary analysis of the information recovered from the Flight Data Recorder within three days of the crash.

The Antonov An-128 has manual switches for pitot heat. The FDR data showed that, for the last fifteen flights in the aircraft, the heating for the three pitot tubes was switched on before take-off, while lined up on the runway. On the 11th of Feb, however, the heating was not turned on as they lined up. When the aircraft started its take-off roll, the heating was off.

If the components of the pitot-static system become blocked, then the air data on the aircraft is compromised, which means that the pilots in the cockpit begin to see false data. There are back-up systems in the aircraft which can be used to determine ground speed and the altitude when at 2,500 feet or below, but this involves a fast diagnosis of the issue. Meanwhile, the aircraft’s incorrect air data can trigger various alarms and lead the pilot to believe that the aircraft is overspeeding or in a stall, which also requires fast reactions. Previous accidents caused by blockages in the pitot-static system include Birgenair flight 301 caused by wasps building a nest in the pitot tube, Aeroperú flight 603 where the static ports were blocked with masking tape during cleaning, and Air France flight 447 when the pitot tubes collected ice while at high altitude.

This accident appears to have most in common with Air France flight 447.

The flight took off at 11:21 UTC (Moscow is UTC+3). It was mainly Russians for the domestic flight with one Azerbaijani and one Swiss passenger. The city of Orsk, their destination, is an important industrial centre located 910 miles southeast of Moscow. Its position on the steppes is considered to straddle Europe and Asia. Although there are some interesting sites in the region, Orsk itself is not a tourist destination and it is likely that the passengers were travelling for business or family reasons.

The flight crew engaged the autopilot as the aircraft reached 130-150 metres (425-500 feet) above the runway and then retracted the flaps. Two and a half minutes after lift-off, at about 1,300 metres above ground level (4,300 feet) travelling at an indicated airspeed of 465-470 km/h (250 knots), the airspeed values logged by the FDR began to disagree. The right seat’s air data module is not logged. Initially the left-hand seat indicated airspeed showed as 30 km/h faster as the standby air data module, that is, the captain saw the aircraft as flying faster than it was, but not by much. A signal sounded for ‘Match IAS’, alerting the flight crew to the disagreement. This signal was on for ten seconds, stopped, and then sounded again. By now they were at a height of 2,000 metres (6,500 feet). The disagreement had changed, the indicated airspeed on the standby air data module continued to increase while the left-side indicated airspeed decreased. From a cockpit point of view, the aircraft appeared to be losing airspeed rapidly while climbing away.

The alarm sounded a third time and the flight crew disengaged the autopilot. The indicated airspeed on the left side instruments continued to decrease and about 30 seconds later it reached zero. The standby unit showed an airspeed of about 540-560 km/h.

From the safety of my desk, it seems quite clear that the pitot tube had begun to collect ice shortly over take-off and by this point, it was completely obstructed and unable to measure the air flow at all. However simple that might seem when one has just been thinking about the pitot-static system, many, many incidents have proven that it is not that easy to reach that conclusion in the air when your aircraft appears to be stalling.

The aircraft data showed vertical G variations of between 1.5 and 0.5 as the aircraft flew between 1700-1900 metres (5,600-6,200 feet). This sounds to me like one of the pilots was putting the nose down and looking to see if the airspeed recovered.

The left-hand indicated airspeed continued to show 0 km/h while the standby unit’s indicated air speed quickly decreased to below 200 km/h. The nose pitched down 30-35° and the aircraft entered a fast descent. The aircraft began to roll to the right. 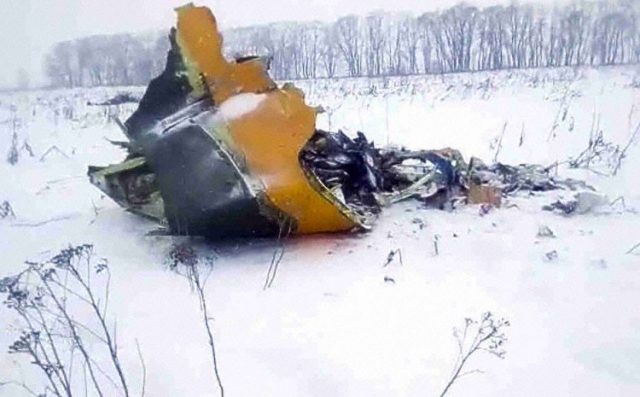 The captain was very experienced pilot, ex-military with over 2,000 hours flying the Antonov AN-148 but (apparently) only 58 hours as captain. The first officer had received his licence in June 2017 and his total of 812 flight hours were all on the An-148.

The initial focus of the investigation will be on the heating system and why it was not on.

…the Investigation team plans to conduct the following works:

Rosaviatsia, the Russian federal air transport agency, has already been party to preliminary findings and on the 22nd referred to two other accidents regarding pitot tube blockages at take-off and crew performance and actions in cases of aircraft system failures.

An ‘unofficial’ transcript of the Cockpit Voice Recorder was published in some media outlets was apparently disseminated by an unreliable source with no proof. The Russian Interstate Aviation Committee has officially refuted the transcript, so I am not including it here.

I don’t know much about the Antonov An-148; it’s listed as fly-by-wire but it appears not to have a mode for critical angle of attack, such as the alpha floor and alpha protection offered in the Airbus.

This marks the end of a long streak of fatality-free, commercial passenger jet flights: the previous fatal accident was the LaMia flight 2933 438 days ago in November 2016: Not Enough Fuel: The Disgusting Truth About LaMia Flight 2933.

Saratov Airlines had its international routes suspended in 2015 for safety violations after a ‘surprise inspection’ (ramp check?) found that a relative of the airline’s general director had been allowed into the cockpit during the flight. Saratov Airlines reprimanded several employees and updated company policies; the sanctions were dropped in May 2016.

Over 600 fragments of the aircraft have been recovered. It seems likely that the next release will be the Cockpit Voice Recorder data, which is already confirmed as having been successfully downloaded and under analysis.