The press is continuing to speculate as to causes and criminals, but I think we’re all clear now that until we find the aircraft itself, we won’t know what happened. Of course what everyone is hoping for is that we find the “black box” and that it has useful information on it.

A black box is actually a bright-orange container designed for high visibility, which houses the cockpit voice recorder and the flight data recorder. The black box is housed at the rear of the aircraft, on the presumption that following the initial impact, the rear of the aircraft will be moving at a slower speed. The black box is engineered to survive a catastrophe, including crashing down to the bottom of the South Indian Ocean. It is extremely likely that if we find the black box, the contents will be safe and we will get at least some data on the final flight of Malaysia Airlines Flight 370. 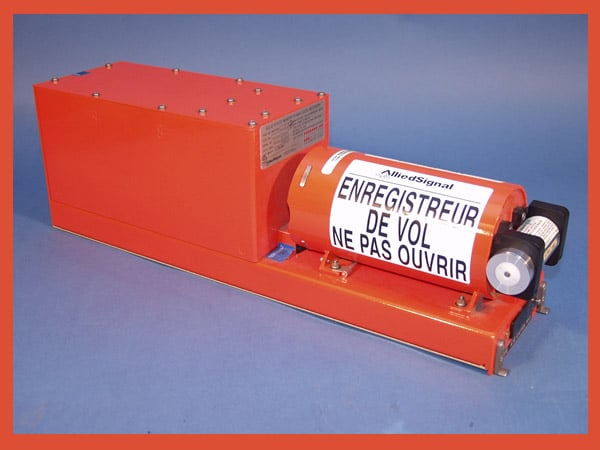 However, finding the black box is proving difficult because we simply don’t know where the aircrash was.

Aircraft are fitted with distress radio beacons, often referred to in aviation as ELTs (Emergency Locator Transmitter) or more colloquially as pingers. These beacons send out a distress signal every second in order to help search and rescue determine the location of a downed aircraft. Traditionally, a distress beacon would interface with the International Cospas-Sarsat Programme, a search and rescue satellite system established in 1979 by Canada, France, the United States and the former Soviet Union. However, it isn’t possible for a distress radio beacon to broadcast to a satellite from underwater. The point of the distress beacon was to find survivors as quickly as possible. It was not intended to discover sunken wreckage at the bottom of the ocean.

A ULB is powered by a lithium-ion battery. Once the beacon is immersed in water, the water closes an electric circuit and the beacon begins to transmit. The ULB will transmit a “ping” at an acoustic frequency of 37.5kHz every second at full power for 30 days. The detection range is 1-2 kilometres in normal conditions and 4-5 kilometers in good conditions. After the 30 days, the ULB will continue to transmit but the range will reduce day by day until it stops altogether. How long it will continue to transmit is based on various factors, including the environment it is in and the age of the beacon and the battery itself which is generally replaced every few years.

After the Air France Flight 447, the Bureau d’Enquêtes et d’Analyses (the French Bureau of Enquiry and Analysis for Civil Aviation Safety) recommended that the ULBs’ transmission period be increased to 90 days.

Honeywell Aerospace, the producers of the black box on Malaysian Airlines Flight 370, have confirmed that the cockpit voice recorder will only have the final two hours of the flight on it. However, the flight data recorder will allow us to recreate the flight itself and the wreckage itself may help to unravel the mystery. The ULB will be attached to the black box and we’re hoping it will lead us to the wreckage of the aircraft in the South Indian Ocean.

Hydro International describes deep-water black box retrieval as “A game of hunt-the-pinger against the clock.”

Localising a pinger from the surface in shallow water is relatively easy, as described above. This task becomes increasingly difficult as water depth increases, however, because the direction is affected by both the horizontal bearing and the depression angle to the beacon (Figure 2). When trying to locate a pinger beacon in deep water, the detection equipment should be installed on a self-propelled underwater vehicle (either an ROV/AUV or a manned submersible). However, this presupposes that the position is already known to within the maximum 2-3km detection range. When aircraft debris is scattered over a large area, as with the recent Air France 447 accident off the Brazilian coast in depths up to 3.5km, a grid search must be conducted using underwater acoustic listening equipment. This equipment must be deployed as deep as possible to overcome the bearing/depression angle conflict (such as on the nuclear submarine described in a news feature in the July 2009 issue of Hydro International). The additional time required to mobilise and carry out this search highlights the second major limitation of fitting CAT aircraft with pinger beacons: that of their limited operational life.

Last week, two different search mechanisms were moved into place in the South Indian Ocean: a Towed Ping Locator 25 and a Bluefin-21, an Autonomous Underwater Vehicle.

The Towed Pinger Locator 25 will be operated by a team on the Royal Australian Navy supply ship Seahorse Standard. The ray-shaped sensor searches for emergency relocation pingers on downed aircraft up to a maximum depth of 20,000 feet.

The system consists of the tow fish, tow cable, winch, hydraulic power unit, generator, and topside control console, although not all of these components are required on every mission. Navigation is accomplished by using algorithms incorporating the amount of cable in the water, the depth indication from the pressure sensor and other parameters. The generator provides electrical power for the system or power from the support platform can be used if it is compatible. The tow fish carries a passive listening device for detecting pingers that automatically transmit an acoustic pulse.

The Pinger Locator is towed behind a vessel at slow speeds, generally from 1 – 5 knots depending on the depth. The received acoustic signal of the pinger is transmitted up the cable and is presented audibly, and can be output to either a Oscilloscope, or Signal Processing Computer. The operator monitors the greatest signal strength and records the navigation coordinates. This procedure is repeated on multiple track lines until the final position is triangulated. 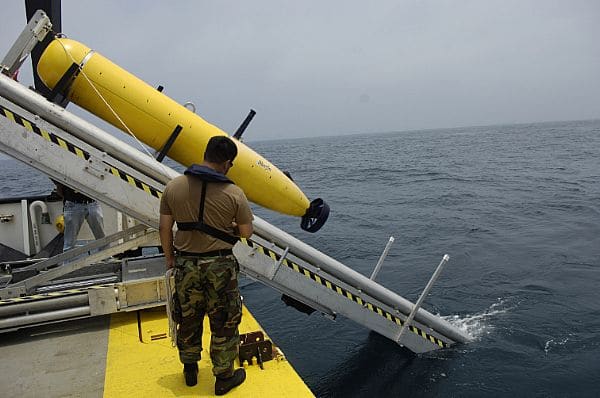 The Bluefin-21 automous underwater vehicle is a sonar-equipped robot used to search for transmissions from the Underwater Locator Beacon as well as detect debris on the ocean floor in an attempt to find the wreckage of MH370. The torpedo-shaped vehicle can operate almost up to three miles underneath sea-level and uses an acoustic camera to provide very high resolution sonar still imagery and video.

Last week, I was a guest on a radio show where I explained that trying to find the aircraft wreckage underwater with these locators was looking for a needle in a haystack. “It’s worse than that,” interrupted an ex-NTSB investigator. “We don’t even know where the haystack is yet.” That’s a pretty perfect summary of the situation.

The limited range and speed of the Towed Pinger Locator 25 and the Bluefin-21 mean that they are of little use in a large area. A vessel towing a pinger can search about 15 square nautical miles per hour in depths less than 2 km. As the water gets deeper, the grid-search becomes slower.

The current search area, moved today to a zone about 1,850 km west of Perth, is approximately 319,000 km². Even with two ships searching to a depth of less than 2 km, we’d be talking about over a year of non-stop, uninterrupted searching in perfect weather. Unfortunately, the South Indian Ocean is quite a bit deeper with an average depth of 3.9 km, and the Underwater Locator Beacon will start getting weaker in ten days.

The reason that the TPL-25 and the Bluefin-21 are in place is so that if we do find debris, they are ready for action rather than losing more precious time transporting them to the scene.

Right now, though, all our hopes are pinned on the ocean surface search for debris. The photographic imagery captured today is being assessed overnight and weather conditions for Saturday are expected to be “reasonable”.

Considering the Probabilities of the Fate of MH370