I’ll be honest: I was really, really hoping that the mystery of Malaysia Airlines Flight 370 would be solved by today and I wouldn’t have to write about all the second-guessing.

So, let’s go over what we know. All times are Malaysian local time.

Unlike Air France Flight 447, there were no known system failures. The last engine data transmission was received at 01:07.

(Yes, I know about the Wall Street Journal piece. Those were not engine data transmissions. We’ll get to that.)

The flight crew ended communications with Kuala Lumpur air traffic control and should have contacted controllers in Vietnam but never did.

The aircraft disappeared from radar at 01:30.

This was the search and rescue forces as of the 12th and 13th: Now the guessing games begin. The problem is, this is a mystery and we love mysteries. So everyone wants to try to solve it, to figure out what happened. And right now, we simply don’t have enough data.

One of my favourite articles so far on the subject is this parody in the Onion:

KUALA LUMPUR, MALAYSIA—Following a host of conflicting reports in the wake of the mysterious disappearance of Malaysia Airlines Flight 370 last Saturday, representatives from the Kuala Lumpur–based carrier acknowledged they had widened their investigation into the vanished Boeing 777 aircraft today to encompass not only the possibilities of mechanical failure, pilot error, terrorist activity, or a botched hijacking, but also the overarching scope of space, time, and humankind’s place in the universe.

I’m seeing a lot of speculation, second-guessing and even anger that “they” have not yet found the plane, thus “they” are clearly not trying hard enough. Frustration is building because we haven’t been able to solve the mystery and find the plane. Communication has been bad, there’s no question, but this is partially because it is very hard to hold press conferences and updates when there is nothing new to say.

In addition, we are looking at different types of facts.

Note I’ve neglected to mention facts from arm-chair investigators like me. We don’t have any facts, only possibilities. It’s important to remember that.

Let’s debunk some information first. We’ll start with the “last-minute turn” on the Flightradar 24 data.

You can replay the actual flight on their website: 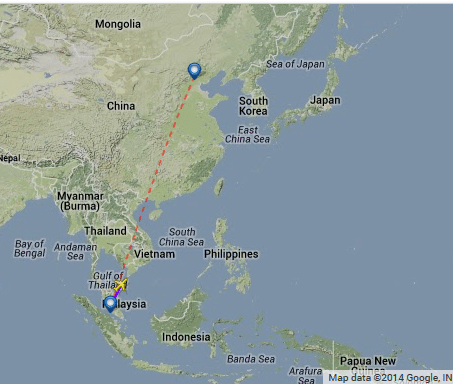 Bear in mind times on Flightradar are in UTC, not local time to the flight.

Much has been made of the turn the aircraft made shortly before disappearing, which can be seen on the Flightradar 24 data. The implication is that this was the aircraft turning back or heading to an unexpected location. Here’s Flight Radar’s statement on this:

Here is a #MH370 situation update from Flightradar24 because of the many questions we get.

The ADS-B transponder of an aircraft is transmitting data twice per second. FR24 saves data every 10-60 second depending on altitude. On cruising altitude data is normally saved once per 60 seconds. By analyzing all our databases and logs we have managed to recover about 2 signals per minute for the last 10 minutes.

Between 17:19 and 17:20 the aircraft was changing heading from 25 to 40 degrees, which is probably completely according to flight plan as MH370 on both 4 March and 8 March did the same at the same position. Last 2 signals are both showing that the aircraft is heading in direction 40 degrees.

Today there are reports in media that MH370 may have turned around. FR24 have not tracked this. This could have happened if the aircraft suddenly lost altitude as FR24 coverage in that area is limited to about 30000 feet.

FR24 have not tracked any emergency squawk alerts for flight MH370 before we lost coverage of the aircraft.

Earlier in the week, much was made of the fact that two passengers on the jet had boarded with false passports. In the meantime, the two people who had been using the passports have been identified by Malaysian police and dismissed as unlikely to be terrorists.

The popular idea that this flight suffered the same fate as Helios Flight 522 in which the pilots lost cabin pressure and did not put on their oxygen masks seems unlikely. We never lost contact with Helios Flight 522 and in fact tracked it until the final crash. It was a ghost plane with all systems functioning.

In contrast, Malaysia Airlines Flight 370 disappeared. If it were the same scenario, the pilots of Flight 370 would have had to turn off the comms and transponder as a final act before submitting to hypoxia. It’s possible, but it just doesn’t seem very likely.

For the aircraft to disappear from radar like that, it would have been a case of explosive decompression, where the differential pressure at 35,000 feet actually broke up the aircraft. If this were the case, there would be no peaceful drifting of the aircraft until it ran out of fuel.

A bomb on the aircraft would have a similar effect. I’m leaning against terrorist activity because there’s been no verifiable claim of responsibility and for a terrorist action to hold weight, people need to know that it happened. That leaves assassination and I just can’t help but think there are easier ways to get rid of someone than to sneak onto a plane with a bomb and blow yourself up.

Hijack gets complicated fast because not only do you have to overwhelm the cabin crew and get control of the cockpit, you also have to deal with 227 passengers all of whom have mobile phones. Silencing the aircraft and all the passengers is technically possible but again, the ability to disappear without a trace is complicated and seems unlikely. That would also mean that the hijackers not only managed to disappear an aircraft without a trace, but also landing a Boeing 777 without anyone noticing. It seems unlikely unless there’s a conspiracy of the hugest kind.

OK, so now we get to the WSJ article.

Malaysia Airlines MH370 missing jet transmitted its location repeatedly to satellites over the course of five hours after it disappeared from radar, people briefed on the matter said, as searchers zeroed in on new target areas hundreds of miles west of the plane’s original course.
The satellites also received speed and altitude information about the plane from its intermittent “pings,” the people said. The final ping was sent from over water, at what one of these people called a normal cruising altitude.

The data transmission they are talking about is the Aircraft Communications and Reporting System (ACARS).

ACARS is a continuous data monitoring system which transmits data automatically. It is what alerted us to the icing situation on Air France 447. And it is that last data received from the engines at 01:07 as the Malaysia Airlines 370 was in the climb for a cruise at 35,000 feet.

ACARS data is event driven, so the silence from 01:07 to 01:30 when the aircraft disappeared is not meaningful. There was simply nothing to report. The last transmission indicated that the aircraft was operating normally.

So when the Malaysian officials insist that there was no further data transmission from the engines after 01:07, that is completely correct.

However, apparently US sources have found that satellites received “faint pings” from the ACARS system, which appear to be the standard “are you there” broadcast which an ACARS system puts out every thirty minutes.

The Boeing’s ACARS communications connected through VHF. There is an additional fee for an ACARS satellite communication link, which Malaysia Airlines did not pay for. So no data would ever have been transferred from the aircraft to the satellite.

This can be compared to going out of coverage with your mobile phone. The phone will continue to try to connect and every network which is not your network will reject those connections.

Now, what the Wall Street Journal is reporting is that eight such connection attempts (pings) were found on the log of the satellite. As those pings happen every 30 minutes, that implies that the aircraft had power four another four hours after it disappeared.

If this is correct (and it has not been verified by anyone actually involved in the investigation, so it might not be), then presumably the aircraft continued to fly for some time after the disappearance. If so, this absolutely implies a manual disabling of the comms system, rather than a systems failure.

Recent reports have jumped on this and come up with theories fit for a Dan Brown novel as to how the aircraft was stolen for nefarious purposes.

Today, various newspapers have claimed that the aircraft may have turned towards the Andamans islands and landed there in secrecy; however that still leaves the slight plot-hole that no one has seen an unexpected Boeing 777.

The editor of the Andaman Chronicle says there is no aircraft there.

“There are no chances that such a big aircraft coming to the Andaman islands can be missed.” And yet the headlines continue.

As long as there is no hard news, speculation and guessing will remain in the forefront. Everyone has a pet theory, ranging from pilot suicide to government plots. My favourite crazy ending to this tragedy so far is the only one that would give us a happy ending: that the disappearance is part of a viral advertisement for a new season of Lost.

I hope that the search parties find some evidence of the aircraft soon. My personal opinion is that the aircraft suffered some catastrophic failure at the beginning of the cruise and is now at the bottom of the ocean. But honestly, until we actually have more data, actual verifiable facts, there’s no real point in guessing.