Exactly two months ago in Nepal, a Let L-410 Turbolet veered off the runway while taking off from Tenzing-Hillary (Lukla) Airport and crashed into two helicopters. 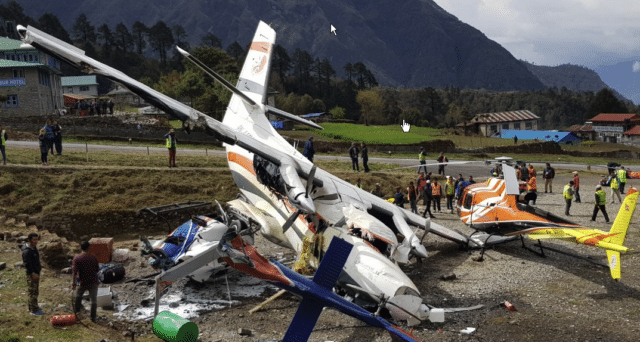 On the 14th of April 2019, there were three crew on board the L-410. The first officer, who appears to have been the pilot flying, was killed in the impact with the spinning rotors of the first helicopter, a Manang Air H125, which had just landed. Two police officers who were providing security to the helicopter passengers were also killed.

The captain of the L-410 and the captain of the Manang Air helicopter were both injured and taken for treatment. There were no passengers on the aircraft and the helicopter passengers, government officials, had just disembarked. This video of the impact was taken by airport CCTV (if you can’t play the videos, try clicking through to the post)

The aircraft was departing for its third flight of the day to Manthali Airport to pick up trekkers and climbers who had flown in from Kathmandu hoping to scale Mount Everest.

As the gateway to Mount Everest, Lukla Airport is the busiest short-take-off-and-landing (STOL) airports in the world. It’s also considered one of the most dangerous.

The Let L-410 Turbolet is well-suited for such an environment: the twin-engine transport aircraft can operate in extreme conditions and can take off in just 510 metres and land in 500 (1,640 feet). Aviation Herald lists 116 hull-loss accidents (where the aircraft was destroyed) with 474 fatalities, the majority of which were passenger flights. However, this is partially because of the L-410 is in common use in hostile terrain where other aircraft are not able to fly.

Based on preliminary information, the first officer was the pilot flying and may not have been qualified for flying at Lukla Airport. The Nepalese CAA has specific requirements: pilots must have completed at least 100 short-take-off-and-landing (STOL) flights with over one year of STOL experience in Nepal as well as at least ten flights into Lukla with a certified instructor.

However, the Kathmandu Post claims to have information that the first officer had only 18 months flying experience and should not have been in control of the aircraft. This has not been confirmed but officials have stated that they are investigating his qualifications and that the fact that there were no passengers on board may be persuaded the captain to allow the first officer to act as Pilot Flying.

Even if this is true, however, there’s no reason to believe the first officer was incompetent. None of this explains why the aircraft suddenly veered to the right.

The flight data recorder and the cockpit voice recorder have been recovered but no further details have been released.

An eyewitness described the scene to the Kathmandu Post:

The plane started to roll with its nose down from the end of the runway where the airport terminal is located. After rolling for about 30 metres in full speed, the aircraft lost control and suddenly turned right before hitting the Manang Air helicopter.

The aircraft first hit Manang Air helicopter standing on the upper helipad which had its rotors spinning, and was dragged downwards before it hit the Shree Air helicopter parked at the lower helipad.

At first, I was afraid to enter the Manang Air chopper because there was smoke coming from the back of the plane. After a while, when I entered the chopper and tried to pull the helicopter captain out of his seat, he told me he could not move because of severe back pain. I asked him whether the main fuel was shut off. He told me it was.

Below is the full video from the CCTV camera, showing the helicopter landing and the passengers disembarking before the L-410 veers off the runway.

Nepalese airlines have a poor safety record and, in 2013, the ICAO added Nepali airlines to their Significant Safety Concern list. Nepal was removed from the blacklist in 2017; however in 2018 the European Commission stated that all Nepali airlines were still banned from EU airspace, as they saw no evidence of change in the country’s air safety oversight. There were three fatal accidents in 2018 and the Nepali Minister for Culture, Tourism and Civil Aviation was killed in a helicopter crash earlier this year.

I have previously written about two fatal crashes in Nepal, both aircraft landing at Kathmandu:

Everest and the climbing industry brings US$300 million to Nepal every year, through tourism and the $11,000 fee for a climbing permit. Nepal has come under fire for not limiting the number of permits it issues or overseeing the pace or timings of the expeditions. No climbing experience is required; the only prerequisite for a climbing permit is a doctor’s note confirming the applicant is physically fit (and money).

On May 22, a climber snapped a photo from a line with dozens of hikers in colorful winter gear that snaked into the sky.
Climbers were crammed crampon-to-crampon along a sharp-edged ridge above South Col, with a 7,000-foot (2,000-meter) drop on either side, all clipped onto a single line of rope, trudging toward the top of the world and risking death as each minute ticked by.

#ProjectPossible update. I summited Everest at 0530 and Lhotse at 1545 despite heavy traffic. I am now at Makalu base camp. Will be going directly for summit push from base camp. I will update once Makalu is complete. Thank you for my support especially my sponsors. pic.twitter.com/mAiLTryEln

Yesterday, in a moment of confusion, I posted this crash as breaking news with a link to a badly-written article. I also quoted the article that the aircraft was a Twin Otter.

To my credit, telling the difference between an L-410 and a Twin Otter isn’t all that easy, especially when it is all crumpled and you can’t see the landing gear.

Anyway, this piece is my penance to those following on Facebook who quickly and politely pointed out my error. I’ll write a follow-up once the final report is released.