Shocking CRM led to that Abandoned Tupolev at Moscow Airport

This story started, as so many do, with an interesting photograph posted to Reddit. 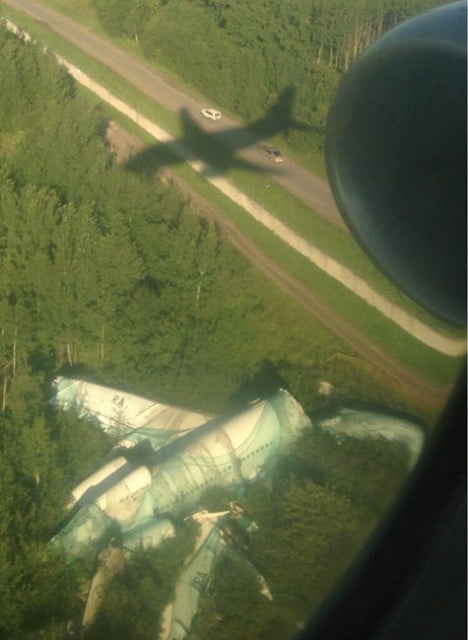 I was curious, and decided to investigate the accident. The sequence of events that led to the wreck was a lot more fascinating than I expected.

Dagestan Airlines flight 372 was a scheduled flight from Vnukovo International Airport, Moscow to Uytash Airport, Makhachkala in the Republic of Dagestan. On the 4th of December in 2010, the flight held 163 passengers, five cabin crew and four flight crew.

You would think it was safe to say that they knew what they were doing.

The plane was a Tupolev Tu-154M, a three-engine aircraft designed in the 1960s and last modernised in the 1980s. The aircraft that day was built in 1992 and had been completely overhauled the year before the accident (2009) and met all relevant European safety standards.

The flight crew landed the Tupolev at Vnukovo at 12:23 local time.

Post-flight inspections and pre-flight preparations were all normal. There were approximately 19.5 tons of fuel on board, plenty for the flight. Conditions weren’t optimal though. The runway was wet with wet snow.

As the aircraft climbed through Flight Level 164 (16,400 feet or 5,000 metres), the flight engineer initiated a manual fuel transfer, transferring fuel from one tank to another to even out the balance. The aircraft continued the climb and about three minutes later, the fuel switch was set back to automatic. As they climbed through 25,000 feet (7,700 metres), the flight crew noticed that the captain’s attitude indicator (artificial horizon) showed a different bank angle from the first officer’s. They discussed the issue but it was not particularly a cause for concern.

The crew reported problems with the engines to air traffic control at 14:20. They requested an immediate return to Vnukovo.

A minute later, the number three generator dropped off line, followed by the number one generator. The engine speeds of both engines dropped to 30% and then shut down.

The crew reported that their engines had failed, along with the generators and navigational equipment. The dispatcher recommended an emergency diversion to Moscow’s Domodedovo airport, 80 km north of the aircraft’s position.

All three generators were now off line. Both attitude indicators failed.

The flight crew diverted to Domodedovo; however they did not appear to go through the checklists to deal with the emergency situation they’d found themselves in.

During the approach, the number 2 engine and the AC power was restored, giving the aircraft a much better chance at a safe landing. However, the crew did not appear to take advantage of this reprieve.

The AC power restored the navigation system, but none of the Domodedovo frequencies were dialled in, although they should have entered the frequencies for the ILS (Instrument Landing System) and the VOR (VHF Omni-directional Radio Range, a type of short-range radio navigation system for aircraft).

The gyros, which supply bank and pitch angle information, would have become misaligned as a part of the power outage. However, once the power was restored, the gyros would stabilise and could be caged (by pulling out a knob to restore the gyroscope to an erect position), which would restore the gyros’ functionality. This was clear on the checklist, including the instruction that, if the gyros did not cage on the first attempt, try again. The crew never tried.

The procedure for a single-engine landing on the three-engine aircraft was to set the flaps at 15 degrees for landing; however the flight crew extended the flaps to 28 degrees.

The Tupolev broke through the clouds at 500 feet, finally gaining visual contact to the ground. The aircraft was two minutes from touchdown and far to the right of the centreline of runway 32. The flight crew turned left, until they were almost perpendicular to the centreline. Almost at the threshold, they crossed the runway and overflew the airport and then 60 metres above the ground and 500 metres off of the centreline, they swung right to line up with the runway.

In an usually scathing analysis, the Russian Interstate Aviation Committee (MAK, the supervising body overseeing aviation) said that a pilot must have certain skills to perform a visual approach and landing. As there was plenty of time, they said, to align the aircraft with the runway and touch down safely after breaking through the clouds, the landing clearly demonstrated that the first officer did not have the skills required to be a pilot.

In any event, the aircraft continued, leaving a trail of snow, dirt and debris in its wake, until it struck a three-metre (10-foot) earthen mound and broke up into three parts. The nose continued on to about 9 metres (30 feet) from the perimeter fence, 60 metres (200 feet) to the left of the centre line and about 1,175 metres (3,900 feet) from the first touch down point. 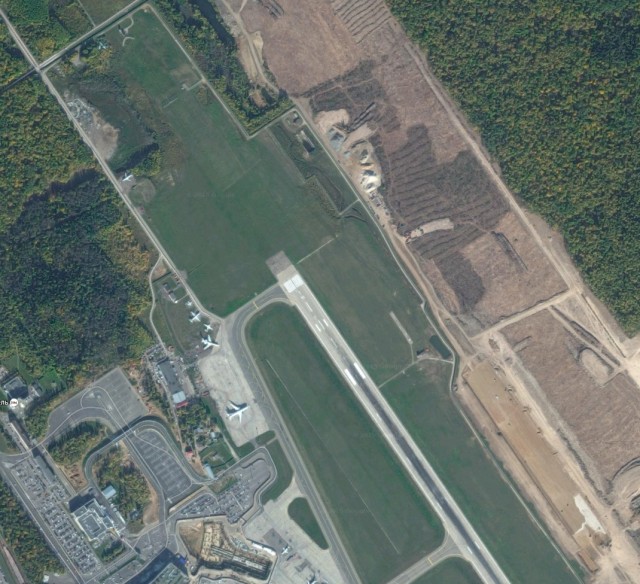 Accident: South East T154 at Moscow on Dec 4th 2010, two of three engines out in flight

The aircraft received substantial damage: the fuselage split in two between frames #32 and #34, the nose section was flattened in the vertical direction with the technics compartments #1 and #2 and the radome destroyed, cockpit floors and bulkheads destroyed with the navigator and flight engineer seats dislocated, nose landing gear collapsed, floor frame in passenger compartment #1 destroyed, stringers of rear fuselage showing significant deformations, right wing separated from the aircraft, the left wing fractured at rib #32 with separation of the wing tip, the left main gear collapsed.

There were two fatalities. A passenger in seat 1E was crushed by the aircraft (“mechanical asphyxia from compression of chest and abdomen by a heavy blunt object, possibly part of the cabin”) and the passenger in seat 3B died of a heart attack. Six crew, including all four flight crew, and 33 passengers received serious injuries. 53 passengers sustained minor injuries. The Tupolev 154 was deemed damage beyond repair.

At the time of the tragedy, the lead prosecutor said that preliminary results pointed to a bird strike, because what else woiuld cause all three engines to fail. But within a day, the investigators had come to the conclusion that it was a fuel issue. They swiftly ruled out poor fuel quality and the wreckage site showed that there was fuel on board.

The problem began when the flight engineer initiated the manual fuel transfer as they climbed out of Vnukovo. No one noticed that he had accidentally turned off the fuel booster pump, which meant that the level of fuel going to the engines fluctuated. There had been previous instances of the fuel booster pumps inadvertently turned off on that model of Tupolev, although never before with such catastrophic results. The engines went out one-by-one as the result of simple fuel starvation.

As if that weren’t bad enough, the four flight crew responded completely inappropriately to the situation. The Interstate Aviation Committee (MAK) specifically called out the flight engineer, who shut down engine #1 before the captain had confirmed, and then attempted to shut down engine #2. The report described him as “reckless”, saying that his only coherent action was when he reconnected generator #2 which restored the AC power.

But as we saw above, the return of the flight and navigation systems was largely ignored by the flight crew, and they did not follow the appropriate (or indeed any) checklists as they came in to land, even though they now had full power and one engine back. The captain was called out for lack of leadership. The flight crew, said the report, took “independent but not always accurate” actions, all trying to solve the situation on their own rather than working as a team using emergency procedures. This was a direct result of insufficient training at the airline, both in CRM and dealing with emergency (engines out) and complex (the landing) scenarios.

The report was released in September 2001 and concluded that the cause of the accident was the flight engineer shutting off a fuel pump but that it was more than possible to land the aircraft safely despite the loss of the engines. However, the flight crew had not reacted appropriately to the loss of engine power and not followed procedures for landing with two engines out. The report made it clear that the crew had not been sufficiently trained to deal with the situation.

Four years later, the flight engineer was found guilty in court for under the criminal code, for violating safety rules of transportation and air travel, which led by neglect to the death of two or more people. He was given a suspended sentence of 3 years.

So why is the aircraft still there? Well, generally it’s the airline who has the responsibility of removing the wreckage from a crash site. Some of the aircraft internals may still be useable and often they’ll want to analyse the wreckage for their own internal investigation. However, Dagestan Airlines had their Airline Operator’s Certificate revoked in 2011 after the final report was released. The investigation found counterfeit parts installed on the aircraft, along with significant violations and systemic weaknesses at the airline relating to training, maintenance, work and rest hours along with other issues. During the year of the investigation, ramp inspections found “gross violations of flight safety” to which the airline management was slow to respond. A final audit of the airline was performed which showed that no progress had been made towards resolving these issues. Investigators concluded that Dagestan Airlines were unable to correct the systemic weaknesses in the airline and thus the airline “posed a direct threat to the life and health of its passengers.” 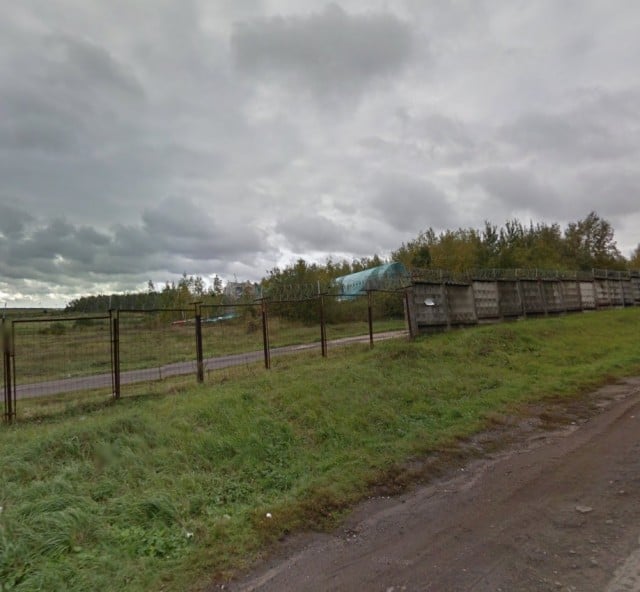 This means that now, there is no one with the responsibility of clearing the aircraft from the site and so it sits, gently gathering rust, as a reminder to the flights inbound to Domodedovo of how quickly it can all go wrong.