“A Unique Occurrence” – Turning an Incident into a Crisis

In the evening of 6 June 2010 a Boeing 737-4B6 of Royal Air Maroc was en route from Amsterdam Schiphol Airport to its destination of Nador International Airport in Morocco. Flight AT-685 had 156 passengers and four crew members on board. The captain was Pilot Flying, first officer was Pilot Monitoring.

Timestamps and actions are recreated from the incident report. Direct quotes from the Dutch Safety Board report are indented with a grey background.

At this moment, travelling 175 knots, the aircraft encounters a bird strike with multiple geese.

21:43 The first officer announces that engine one is damaged. The captain does not respond.

The captain said later that the aircraft was shaking violently and was difficult to control. He decided to return immediately. Good decision!

21:43:04 At a height of 140 feet, the aircraft pitch attitude is 12 degrees nose up and the engine RPM were 45.5% and 93.8% N1. The captain tells the FO to select the gear down and declare an emergency. The first officer selects gear down, contacts the runway controller with a mayday call.

However, the flight crew were not (yet) in a position to land. Why put the gear down immediately? The priority should be to get the plane climbing and stable. Once you are at a safe altitude, you have the chance to deal with the individual issues and even time to go over checklists. The flight crew appear to have been in a panic.

…the pilots initially believed both engines had been damaged by the bird strike. This conclusion, in combination with the vibrations, stench and unsafe nose gear indication lead the pilots to doubt whether the aircraft would remain airborne. Based on these assumptions, it is understandable that the pilots decided to return to the airport as quickly as possible.

Well, yes, I can understand wanting to return to the airport as quickly as possible. However, if both engines were out, he was making a suicide turn at under 500 feet. Even with the fear that the plane is extensively damaged, I have to think that the best response would be to attempt to glide to the open land in front of me.

The right thrust lever is retarded manually, decreasing engine RMP from 93.8% to 82.0% N1. I can’t come up with a good reason for reducing the power, I really can’t.

But more important is this turn to the right.

Take a look at the illustration from the accident report here: 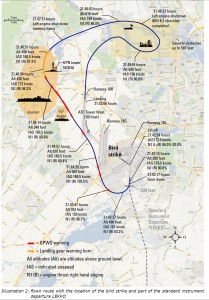 They departed on runway 18. You can see grey dotted line, where the flight should have carried on south for the climb out and then a gentle left turn. The correct procedure would be to continue south, clean up the plane, and then plan your turn back to the airfield.

The runway controller saw aircraft in the turn, instructed crew to continue the turn and roll out on a heading of 330 degrees. Full credit to the controller – he did not argue or try to ask what they were doing but simply adapted to their current route and tried to give them a sensible heading.

He then informed crew they’d receive further heading instructions for approach to runway 18R and halted the traffic taking off of Runway 24.

The first officer acknowledged ATC and states again in the cockpit that engine one is damaged. The captain does not respond.

During the aircraft’s turn the maximum recorded bank angle to the right was 37.5 degrees. Airspeed dropped from 179 to 156 knots.

21:43:26 Autothrottle disengaged. The aircraft continues in a slow climb.

The captain is not actually acknowledging any of the information he’s being given. Overload?

21:44:13 The runway controller calls the crew to ask whether they will be able to maintain their altitude and to give new heading instructions.

The first officer speaks to the runway controller while the captain speaks to the purser. The captain is flying the aircraft manually now which is correct procedure: the autopilot should not be used under 1,000 feet.

The purser repeats that the left engine is on fire. The Ground Proximity Warning System triggers several times.

At this stage, finally, power to the (fully functional) right engine is increased and the aircraft begins to climb and build airspeed.

21:44:39 The aircraft is at an altitude of 500 feet with an indicated airspeed of 169.5 knots. The first officer states that the right engine has been at full thrust for two minutes since the start of the take-off roll.

The autopilot is not to be used when flying under 1,000 feet so in addition to trying to navigate at low height in a disabled aircraft to a runway in an urban area, the captain is having to fly the plane by hand.

Air Traffic Control can’t do much to help: their minimum vectoring altitude is 1,200 feet. Below 1,200 feet, the captain is responsible for avoiding obstacles and to avoid flying over built-up areas. The controller can not give vectors.

The situation has gone from a simple emergency (bird strike, one engine out, unknown status of nose gear) to a complex one as they fly over the urban areas – in fact, they fly through the urban areas.

As a result of the immediate right turn and limited rate of climb, the crew members were under increased pressure as the autopilot may not be engaged at altitudes below 1000 feet. The pilots had to look outside to identify obstacles. The crew was also forced to deal with complications such as (system) warnings in the cockpit and an unstable flight path (variable heading, altitude, flight speed and rate of climb).

As a result, both pilots did not carry out their tasks – such as the execution of (follow-up) procedures and completion of checklists – according to procedure. This caused an increased risk to the aircraft, its occupants and the surrounding area.

21:44:57 The aircraft flies over Vijfhuizen at an altitude of 262 feet with an indicated airspeed of 160.5 knots. The GPWS warnings change to TOO LOW TERRAIN

The obstacles aren’t shown because ATC can’t navigate a plane through these areas at these heights. But the controllers can’t offer vectors at such a low level, they should be able to help the crew see and avoid tall buildings that they know are on the flight path.

Their route takes them straight past a 479-foot tower which was located on the outskirts of Haarlem. They then proceed towards Amsterdam’s western harbour area, flying near obstacles up to 587 feet. They are flying below the tallest buildings in their area.

When the flight crew was asked if they received training for incidents like this they replied that an incident like this could not be trained and for that reason they did not receive such training.

Despite this the flight crew was convinced that they had encountered a unique occurrence.

The captain had 7,540 hours and the first officer had 2,730 hours. Nevertheless, they both failed to follow standard procedure for the emergency with which they were confronted. Not only that, they were convinced that there was no procedure to deal with the emergency.

21:46:20 The GPWS warnings cease but are replaced with continous sound of the landing gear warning horn until 21:47:07

As the flight crew discuss the warning horn, the controller gives the crew a heading of 350 degrees as a downwind leg to runway 18R and asks if they are able to climb. The crew responded that they cannot.

Up until this point, the crew have more or less followed the headings given by the controller.

The arrival controller then instructed the flight crew to follow a new heading of 100 degrees and reported they were four miles from touchdown. The crew concluded that they could not silence the landing gear warning horn. The captain turned the aircraft towards the new heading but rolled out on heading 065. At 21.47:17 hours the left engine was shut down according to the memory items 17 of the “Engine Fire or Engine Severe Damage or Separation” checklist (Quick Reference Handbook chapter 8.2). During this procedure the arrival controller informed the crew to fly heading 160 degrees. This information was not read back nor followed. A moment later the arrival controller gave a heading of 210 degrees which was not followed either. Only a very shallow right turn was initiated. By the time the flight crew had completed and confirmed the recall items of the checklist, the aircraft was positioned north of the airport, crossing the extended centre line of runway 18L.

21:48:03 The controller gives the crew a heading of 270 degrees to try to steer them back towards runway 18R. Crew completes the checklist and finish programming the flight management computer.

21:48:47 Airspeed fluctuates between 160 and 170 knots. As aircraft passes through heading 110, the first officer asks for further heading instructions.

21:49:57 The airspeed drops to 156 knots. The first officer warns the captain that the airspeed is getting low. The captain adjusts the thrust lever and remarks that the right engine is at full thrust.

But he’s wrong. The engine was briefly at full thrust – for 5 seconds – as the captain made that statement. But just before and just after, it was not. He’s pulled it back.

Eventually, they manage the turn for a manual instrument landing (Category I) approach on runway 18R. Flaps are set to position 5. Flap positions 5 through 15 are used for take-off. Normal landings require flaps 30 or 40. 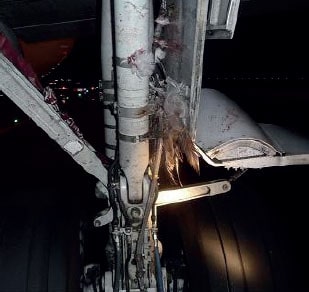 The accident report confirms the bird strike as a causal factor but goes on to specify the flight crew management of the issue as equally a cause:

The deviations from the standard operational procedures after an engine failure were:

These deviations from the standard operational procedures resulted in the aircraft only being able to achieve a limited rate of climb, causing it to be unable to achieve the required minimum safe flying altitude. The flight crew had difficulty controlling the aircraft and were distracted by various audio and visual warnings

…the only concession I’ll give you is that he did have some piloting ability, which is what got the plane back in spite of his piss poor decision making.

This is a truly frightening incident. But, easy as it is to judge, we shouldn’t simply point at the pilots and tell them they handled it wrong. Pilots are the easy target, the scapegoat. If both pilots felt adamantly that the situation was so unbelievably rare that it could not be trained for, then it seems clear that they were not, in fact, adequately trained for it. Bird strikes are not a rare event and being able to analyse the symptoms and come up with a sensible plan is crucial. Understanding the situation and prioritising is the primary function of the flight crew in an emergency.

The accident report insists that Royal Air Maroc overhaul their entire training system and I agree. Something is wrong when two highly experienced pilots do not know how to deal with a situation that should be covered in training. They did not know (or had not been trained) to go for the books and check the procedure. Standard Operating Procedures exist because we know people are fallible. Going by the book is not a sign of weakness or inexperience. If an airline is not making that clear to their staff, it is the airlines’ job to work out where the failure is.

The recommendations as a result of the investigation are clear cut. Here’s my summary:

You can read the full accident report as a PDF in English for more information, including an in-depth analysis of the bird strike problem.