Near Miss at Barcelona

Last week, a plane spotter named Miguel Angel was filming flights coming into Barcelona airport when he captured this video:

Five days later, that video has had over 20 million views.

The aircraft on the taxi-way is Aerolíneas Argentinas flight AR-1163, an Airbus A340 which was departing Barcelona for a flight to Buenos Aires, Argentina.

Coming into land was UTair flight UT5187, a Boeing 767-300 inbound to Barcelona from Moscow.

It is hard to see from the video just how close the two aircraft were to each other but it is clear that the Aerolíneas Argentinas flight is entering the active runway much too late for a safe crossing. The UTair was on short final and descended through to about 200 feet above ground level when the flight crew initiated a go-around. 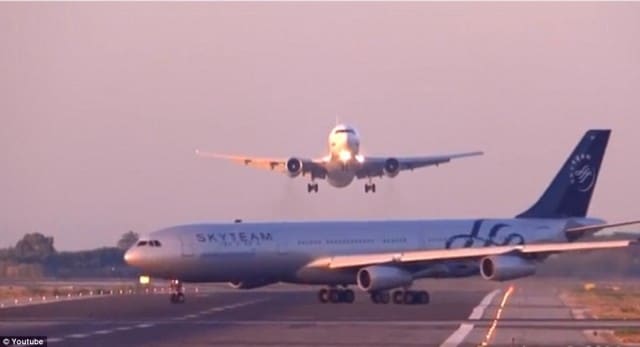 The distance from the runway threshold (where the UTair Boeing would have touched down) and the taxiway Mike intersection (where the Argentinas Airbus was crossing) was 1,166 meters (3,826 feet).

Initial reports said that the Argentinas flight had been told to hold at the active runway and then crossed anyway. In fact, the UTair flight crew specifically said that they heard air traffic control instruct the Argentinas Airbus to wait for the UTair aircraft to land before crossing the order. Siberian Times quoted First Officer Kirill Kuzmin:

‘Before getting close to the runway we heard the air traffic controller’s command allowing Argentinians to cross the runway after we had landed.

‘The Argentinians repeated the comment which meant that they heard and accepted it.

‘But then suddenly – and without a clear reason – the Argentinians got onto the runway just as our altitude was going below 100 metres.’

AENA (Aeropuertos Españoles y Navegación Aérea) who operate the airport and the air traffic control at Barcelona, initially stated that there was sufficient separation and that UTair could have continued the landing without issue.

However at less than 20 seconds from touchdown and apparently about 40 seconds laterally from the Argentinas Airbus, it seems pretty obvious that aborting the landing was the only sane decision.

AENA stated that no safety report was filed and that both aircraft were where they should have been. A go-around doesn’t necessarily rate a safety report. At London Heathrow in 2010, there were 551 go-arounds, 0.24% of the total arrivals, often because the previously landing aircraft has not vacated the runway in the expected time.

The following day, CIAIAC (Comisión de Investigación de Accidentes e Incidentes de Aviación Civil), Spain’s aviation authority, announced that an investigation into the occurrence had been opened. The provisional information is on their website.

AENA’s statement that both aircraft were where they should be implies that UTair was cleared for landing and Argentinas were cleared to cross the active runway. A look at the Barcelona chart shows that the route that the Argentinas Airbus was taking would lead it to cross Runway 02 three times in order to get to Runway 25R. 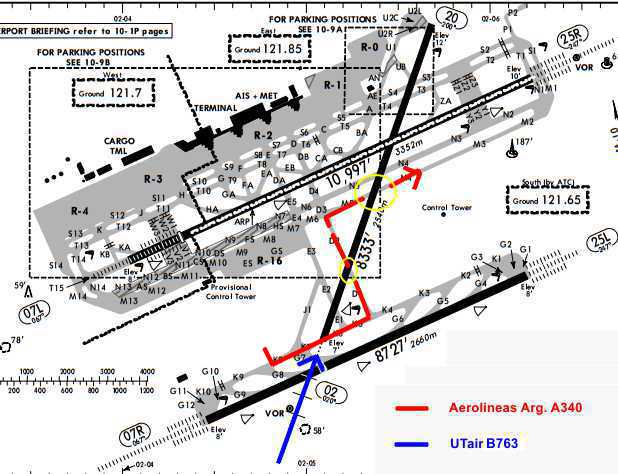 An unverified account of the sequence of events has been posted to aviation forums and is supposedly an explanation as given by a Barcelona air traffic controller.

Two of the three ground Air Traffic Controllers work in a smaller Tower located near the main Terminal (frequencies 121.65 and 122.225) while the other ground frequency (121.7), delivery and the two tower frequencies (118.1 and 119.1) are located in the main Tower. 121.65 (122.225 not used at night) cleared the Aerolineas Argentinas A340 to cross runway 02, which he thought was not active as he expected the airport to be in day configuration. Meanwhile, the UT Air Boeing 767 was cleared to land on the same runway by Tower (118.1).

Crossing the active runway usually requires some coordination between the two towers but this is not necessary in night configuration.

That is, this poster believes that the air traffic controller who cleared the Argentinas Airbus thought that Runway 02 was already inactive and thus didn’t need Tower clearance to cross. It’s certainly the case that Runway 02 is generally inactive during the day and thus can be crossed by the various taxi-ways without aircraft needing to hold. At night, specifically from 23:00 to 07:00 local time, Barcelona prefers to use Runway 02 for noise abatement reasons. The UTair flight landed 15 minutes after the go-around, at 07:06 local time.

Under normal circumstances, an aircraft would always speak to the tower before crossing an active runway, as Tower is responsible for coordinating the landing and departing traffic. Having listened to the Tower frequency at LiveATC, UTAir flight 5187 is clearly on the channel (and told clear to land) but Argentinas flight 1163 is not.

So the anonymous posting sounds feasible, although we will need to wait for a final report from the Spanish aviation authority to find out exactly what happened.