Last year, I wrote about the fatal Convair Crash at Pretoria which took place in June 2018. The final report came out in August which gives a lot more information than we had at the time.

Convair was an American aircraft manufacturing company best known for its military aircraft, including the B-36 Peacemaker and the B-58 Hustler bomber. They designed a Convair twin engine airliner in 1947 which led to the development of the CV-340, which could seat 44 passengers. The CV-340 replaced United Airlines DC-3 and KLM operated the aircraft from 1953-1963. Many CV340 aircraft were converted to the CV-440, which included an additional two rows of seats, improved soundproofing and a higher maximum weight.

The Convair 340/440 registration ZS-BRV was owned by Rovos Rail who had retired it from service in 2009. Rovos Rail later arranged for it to be sold (some sources say they donated it) to the Dutch aviation museum Luchtvaart Themapark Aviodrome located in Lelystad.

The museum arranged for ZS-BRV to be restored and painted in February 2017 before being flown to the Netherlands. In December, it was branded with the colours of Martin’s Air Charter, a Dutch cargo airline which had operated Convairs. The last logged flight of the aircraft was 22 February 2018.

In April, the Museum representatives came to South Africa for an inspection of the Convair 340/440 and its documentation. The Convair was serviced and inspected, ready to be ferried to the Netherlands, on the 6th July 2018. As a part of the maintenance, the manifold pressure gauge (with a dual indicator for the left and right engine) was removed and repaired. The right engine valve on the gauge had carbon deposits and maintenance staff cleaned both the left and right engine valves before reassembling the manifold pressure gauge and refitting it.

On the 10th of July, four days after the maintenance was completed, Rovos Rail and Aviodrome signed the sale agreement for the Convair. The aircraft was refuelled with 2,100 litres of low lead (LL) 100 octane fuel.

The flight crew, two Australian pilots, both had valid Australian licences. The captain, who was Pilot Flying, held an Australian ATL, Commercial Licence and Private Licence and had 18,240 flight hours, with 63 on type (in 2016 and 2017). However, his validation from the South African Civil Aviation Authority was for a Private Pilot Licence under visual flight rules (VFR) only.

The first officer, who was Pilot Monitoring, held an Australian Private Licence which had been validated by the South African Civil Aviation Authority in 2016, two years before the accident. In 2017 he acquired the Convair 340/440 rating. His total hours and the experience with the Convair could not be confirmed as his logbook could not be found (it might have been in the aircraft).

They had last flown the Convair 17 months before the accident, which means that even if they had been authorised to fly the Convair in South Africa, they would not have complied with the 12-month competency check.

Now lack of paperwork doesn’t necessarily mean a lack of ability to fly but it is clearly bypassing systems meant to provide the public with reassurance that their flight is safe. It also shows a lack of attention to detail and a lack of care when it comes to regulations.

The third person in the cockpit, who was not listed as crew, was the licensed aircraft maintenance engineer who was responsible for the maintenance of the aircraft. Although technically a passenger, he took part in the flight from the jump seat. His assistant was to fly in the cabin with the rest of the passengers.

The engineer was the only person in South Africa who was licensed to work on the aircraft. There was no documentation to show when the engineer had last undergone a recurrent training/competency check as required by South African Aviation Regulations. The maintenance organisation where he worked was not able to show any training records for the engineer.

The aircraft itself did not have a flight data recorder nor a cockpit voice recorder installed and it was not required to do so. However, there was a GoPro video system installed which recorded some of the aspects and parameters of the flight as well as the voices inside the cockpit.

On that day, the flight crew filed their VFR flight plan with Johannesburg Briefing. They planned to fly to Pilanesberg Aerodrome and then back to Wonderboom. Neither the flight crew nor ATC seem to have been aware of the Notice to Airmen (NOTAM) declaring Pilanesberg Aerodrome’s runway closed to fixed-wing aircraft as it was undergoing maintenance.

Including the engineer and his assistant, there were 17 passengers booked on the flight: 12 South Africans, 1 Australian, 1 Zimbabwean and 3 from the Netherlands. All of the passengers were asked to sign an indemnity before the flight.

The weather was good: scattered clouds at 3,500 feet and a breeze blowing 270° at four knots.

The engineer connected the tug and towed the aircraft for start-up and taxi. The passengers were invited to board the aircraft.

Once the flight crew had started the right engine, the engineer’s assistant disconnected the external ground power unit and boarded the aircraft. He took a seat in the cabin with the rest of the passengers while the flight crew completed their run up checks. The flight crew requested taxi and take-off from runway 29.

As they began their taxi, the Pilot Flying complained about the stiffness of the rudder. He also commented that the left engine’s auto-feather light was not illuminating when tested. The engineer, sitting in the jump seat, agreed, saying that the light bulb was inoperative.

A review of the GoPro cameras fitted onto the aircraft showed that the Convair repeatedly drifted to the left and then came back to the centreline.

ATC cleared the aircraft for departure. The Convair entered the runway and began to accelerate.

As it reached 50 knots, the Pilot Monitoring noticed that the left engine manifold pressure was low and said so. It was still possible to abort the flight as they had not yet reached V1 — the speed at which they were committed to continue with the take-off — but the decision had to be taken quickly. A few seconds later, the Pilot Monitoring called V1, thus committing the flight crew to continuing.

The aircraft rotated. As it lifted off the runway, flames appeared on the top front side of the left engine cowling and the exhaust area. The aircraft climbed away at a rate of 600 to 700 feet per minute while passengers in the cabin filmed the flames licking the engine.

The assistant engineer who was sitting in the cabin came to the flight deck to alert his boss in the jump seat that the left engine was on fire. Then he quickly returned to his seat so that he could record the smoke and flames for troubleshooting once they were back on the ground. Looking out the window, he was surprised to see that the they were no longer climbing, in fact the aircraft was losing height.

The final report is a bit confusing on this score.

The ATC confirmed to the investigators that the left engine had caught fire and that the crew had broadcasted a ‘MAYDAY’, however when the crew broadcasted ‘MAYDAY’ they did not indicate what the nature of their emergency was. This statement was confirmed by the recordings of the cockpit GoPro camera.

Now, I’m sorry, but in the transcript as included in the accident report, they very clearly state that they have an engine fire in the left hand engine. I can just imagine ATC responding saying, “Yes, but what is the emergency?”

I think rather the issue was that the flight crew did not say what they intended to do, which meant that ATC was not in a great position to prepare and support.

In any event, the controller activated the crash alarm immediately and prioritised the flight for landing, on the assumption that the Convair would return to the airfield.

The engine continued to burn. In the cockpit, the left engine’s RPM indicator fluctuated and eventually the fire master caution light came on, accompanied by an audible warning sound. The engineer handed the Pilot Monitoring the quick reference handbook, presumably so that the flight crew could follow the procedures for an emergency in-flight fire.

The Convair was losing altitude quickly.

The checklist for an engine fire reads as follows:

The engineer in the jump seat handed the Quick Reference Manual to the Pilot Monitoring, but he never opened it.

ZS-BRV: Bravo Romeo Victor we gonna try and track for a right base two nine.

The Pilot Flying initiated a right turn to return to the airfield but the engine fire intensified. The left wing rear spar and the left aileron system were damaged by the heat.

What he didn’t do was identify which engine was burning and attempt to extinguish it. Although the assistant engineer had clearly come forward and warned them about the left engine, the flight crew appeared not to know which engine was on fire.

Multi-engine crew are trained to shut down down the engine immediately if they suspect a fire in the engine. But for some reason, the flight crew didn’t do this. They never discussed the checklist. The propeller was never feathered, the fuel was never cut off, the fire extinguishing system was never activated. Instead, the engine was simply left to burn.

The engineer was operating the engine controls and overhead switches while the aircraft turned right again onto base leg, still losing height. The flight crew watched the engineer, seemingly unsure what to do.

On the ground, bystanders watched melted metal debris falling from the left engine exhaust as the Convair continued to lose altitude.

The fire in the left-wing rear spar had melted the aileron cables. They lost all aileron control. The Pilot Flying’s stress can be seen even in the written transcription through his unintentional radio calls to ATC.

About six kilometres east of the airfield, the Pilot Flying lost control of the aircraft as it descended left wing low in a slight roll, made worse by the partial power in the left engine.

The remaining wreckage was found a few metres further, where the Convair had fallen to pieces with the final impact in a vacant lot behind the factory. 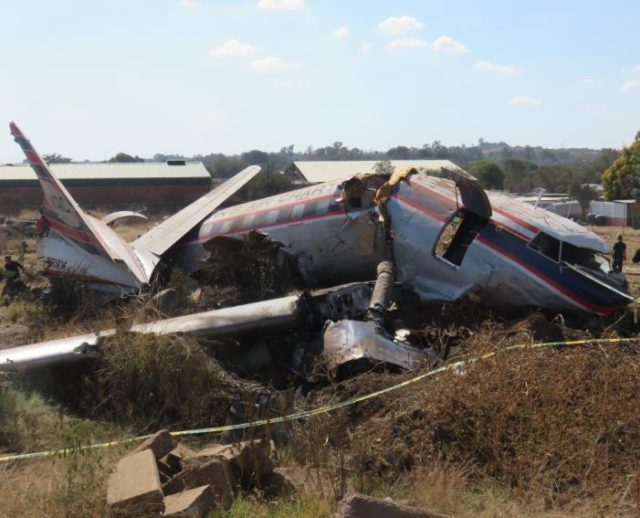 Emergency services rushed to the scene. The passengers were quickly transported to local hospitals but the rescue units could not get the crew out of the cockpit. The Jaws of Life were needed to free the trapped flight crew who were immediately airlifted to a hospital in Johannesburg. The engineer, who had been sat in the jump seat, was dead.

The day after the accident, the investigation team noted a beeping sound coming from the aft section of the aircraft, which had separated from the fuselage. It was the emergency locator transmitter (ELT).

I think there’s quite enough here for a discussion of what went wrong so I’m going to leave you to it and next week I’ll finish going through the report, which will shed some light on why the fire started in the first place.