This must be the Photograph of the Year

I only have a quick post for you this week (and I’m taking next week off to deal with life issues). But I hope you all will agree that this photograph is worth a million words.

But when I called it unbelievable, I meant that many people honestly did not believe it and were convinced that it was a photoshopped compilation.

I first saw it on Down Under Aviation News who posted a cropped version with a caption that the photograph would undoubtedly go down as one of the most famous Australian aviation pics ever. 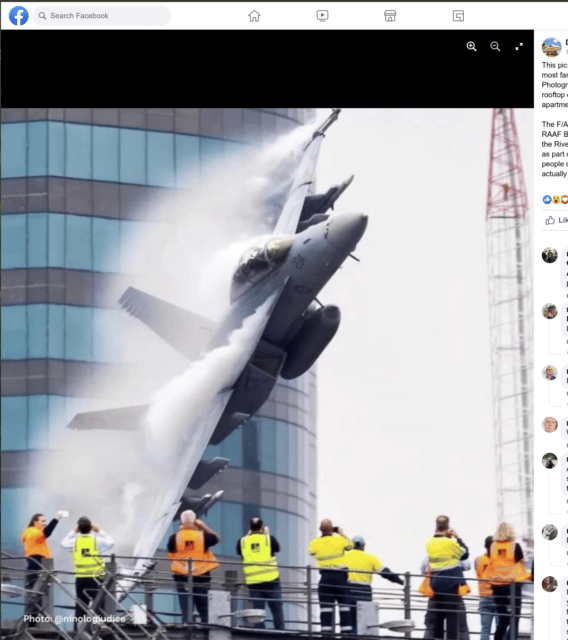 The responses were fast and condemning.

The photo of the aircraft is superimposed over a non-related picture. I am a photographer.

The people are not even looking at the plane. It isn’t there.

It’s good to see that someone can still think critically.

You obviously lack a critical mind and knowledge of what is also allowed within major cities and what is possible in aeronatuical engineering. May I suggest you go back to basics and do your own research.

It is always amazing to me how quickly people degenerate into attacking the intelligence of people who disagree with them.

Another photographer quickly came to Lo Guidice’s defence. David Kapernick was with Lo Guidice that day and took similar photographs.

He explains in the thread that he is friends with Lo Guidice and that they took the photographs from his veranda. Lo Guidice brought beer and pizza and then they settled in to watch the practice flights for the airshow. Kapernick posted a week later to say that their photographs had seen over 9 million views and counting on Twitter in the week after they first shared their shots.

The other photographers in the photos are on Brisbane Story Bridge, which seems to be a popular spot for airshow photography in Brisbane.

Meanwhile, Lo Guidice became frustrated with the response and posted the entire sequence to Instagram. Note that the embedded version here may take a moment to load, it looks better if you click through. Instagram embed is not the greatest!

Finally, a number of other Brisbane photographers have spoken up to the defend the photograph and the position it was photographed from. Sadly, I don’t know Brisbane well enough to spot the flyover but this video is meant to be the actual cockpit footage from the flight that Lo Giudice and Kabernice photographed:

The jet appears much closer to the spectators than it actually is as a result of foreshortening. This is a common issue in photography, where the size and depth of the subjects are distorted within the two-dimensional image. This is often done intentionally, where I think the most common version I’ve seen is where a person pretends to hold up the Leaning Tower of Pisa or to be plucking the setting sun from the sky.

In these days of AI-generated photography and deep fakes, I think it is important that we recognise the talent and effort that goes into real photograph taken by a person with a camera with no special effects. There’s something wondrous and exciting to know that a person was standing there and able to grab this shot. And it makes me happy to know that it is possible (even if unlikely) that I could be stood in such a place and see such a thing, even though I know my version would just be a fuzzy grey streak surrounded by cloudy blur.

This isn’t just conjecture. I took some friends to see the Soviet cemetery at Ämari Military Air Base (more on this soon) and we heard two German Eurofighter Typhoons taking off. A few minutes later one returned and as I know where the circuit is, I should have been perfectly positioned for the shot. However, when it came to the crunch, I did not just fail to get the photograph, I didn’t manage to get out from under the pine trees in time to even try.

Luckily, my friend Bernie Digman managed to take excellent photographs as it passed over us and gave me permission to share them with you.

I’m so lucky to be surrounded by competent people; I highly recommend this as a life plan.