In June, Christian Semcesen and the other members of his flying club in Oslo, Norway, flew 500 nautical miles from Kjeller Airport (ENKJ) to Bodø (ENBO) for an airshow. The planes: two ex-Norwegian Army Cubs, two Tiger Moths, a PT-19 Cornell and a Chipmunk, Bird Dog, a Broussard and a T-6 Texan. Christian flew the cub for this trip and took some astounding photographs which he has graciously allowed me to share with you. If you’re on the look-out for beautiful locations for flying, look no further: the scenery is stunning.

This final photograph is my absolute favourite shot of the set. Christian writes:

I got to meet a Norwegian WWII Spitfire pilot, who commanded 332 sqdn at North Weald, Wilhelm Mohr. He signed the baggage hatch of one of our Tiger Moths, alongside the signature of Eric “Winkle” Brown, which I got last weekend at another airshow. 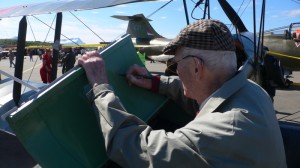