Who can resist a compilation with kittens and spitfires?

I hope you are sitting comfortably because this week I have some extraordinary articles to fill your weekend.

These are my favourite aviation-related pieces that I’ve read lately. I found them all fascinating and I’m sure you will too.

This man went to the scene of a Boeing crash in 1959 but didn’t think to share his story until fifty years later.

It was October 19, 1959 when Washington’s first — and, so far, only — jetliner crash happened. After a story about the crash of a Boeing 707 near Oso was posted in May 2014, a Bothell man contacted KIRO Newsradio and offered to share some rare photographs he’d taken of the aftermath.

It’s time for another clean-out of my in-progress folder and I’m afraid this case of fatigue on approach didn’t make the cut.

The crash of American Airlines flight 1420 on the 1st of June 1999 took place at the end of the first day of a 3-day sequence assigned to the flight crew in a McDonnel Douglas DC-9 (MD-82) registration N215AA. 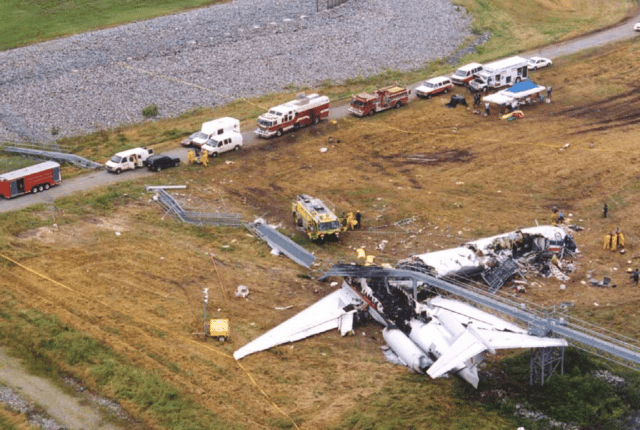 The captain and the first officer checked in at O’Hare International Airport in Chicago Illinois shortly after ten local time on the first morning and departed Chicago on time with the captain as Pilot Flying and the first officer as Pilot Monitoring. They arrived at Salt Lake City International on time. They had two hours until departure for the next leg, from Salt Lake City to Dallas/Fort Worth, with the first officer as Pilot Flying. They departed on time but then had to hold during the approach to avoid bad weather, which led to the aircraft arriving in Dallas/Fort Worth about 40 minutes late.

The last leg of the day was from Dallas/Fort Worth to Little Rock, Arkansas, which was suffering severe thunderstorms. When the aircraft landed at Little Rock National Airport, it overran the runway, knocking the tubes on the left side of the ILS localiser, through a chain link fence and down a 15-foot embankment before crashing into the structure supporting the runway approach lighting system. The captain and ten passengers were killed.

The investigation found that the flight crew was fatigued and intent on landing at Little Rock. They continued the approach despite the wind exceeding the maximum crosswind component. The final report concluded that the probable causes were the flight crew’s decision to continue the approach and the failure to extend the spoilers after touchdown.

You can read the full report here

This article about how cockpit design changed to save lives is absolutely fascinating.

When U.S. air force discovered the flaw of averages

In the late 1940s, the United States air force had a serious problem: its pilots could not keep control of their planes. Although this was the dawn of jet-powered aviation and the planes were faster and more complicated to fly, the problems were so frequent and involved so many different aircraft that the air force had an alarming, life-or-death mystery on its hands. “It was a difficult time to be flying,” one retired airman told me. “You never knew if you were going to end up in the dirt.” At its worst point, 17 pilots crashed in a single day.

At first, the military brass pinned the blame on the men in the cockpits, citing “pilot error” as the most common reason in crash reports. This judgment certainly seemed reasonable, since the planes themselves seldom malfunctioned. Engineers confirmed this time and again, testing the mechanics and electronics of the planes and finding no defects. Pilots, too, were baffled. The only thing they knew for sure was that their piloting skills were not the cause of the problem. If it wasn’t human or mechanical error, what was it?

And while we are talking about early aviation design, this twenty-minute video from Real Engineering, sent to me by R, is an enthralling documentary on the Spitfire. I particularly like that it is without any clickbait or frills.

Also,thanks to Mike for sending me this shocking story of a major airline paying half a million to settle an accusation that they intentionally sabotaged a pilot’s career.

Delta paid a doctor to declare a pilot mentally ill after she spoke up. She just won big in court

“We should consider whether a Section 15 is appropriate,” Jim Graham, then Delta’s vice president of flight operations, wrote to a pilot manager, using the terminology for a process that would deem Petitt too mentally ill to pilot planes. “If she cannot embrace and understand the reasons behind our actions, it stands to reason she might not be able to make appropriate decisions for the safe operation of a flight.”

Dr. David Altman, the doctor Delta hired to assess Petitt, was paid $74,000 and came up with a bipolar disorder diagnosis on exquisitely sexist grounds: Petitt was doing so much with her life—the job, the kids, the degrees, the books—“well beyond what any woman I’ve ever met could do,” according to Altman, so she must be manic.

I’m going to counter that with the feel-good story of the week in the Washington Post about an unexpected addition to the Hickory Aviation Museum.

Kittens born in museum fighter jet stayed for weeks: ‘Who were we to argue?’

Falls, a former Navy doctor and volunteer, was making his outdoor rounds last month when he heard a squeaking that made him pause. He followed the sounds to a 1950s jet trainer called a Lockheed T-33 Shooting Star.

The noise was coming from deep inside. Concerned, he pulled his phone from his pocket to shine a light through the plane’s tailpipe. The engine had been removed, so he was able to peer in about 15 feet.

“I saw this furry little head pop up,” he said. “And suddenly there was another, then another and another.” 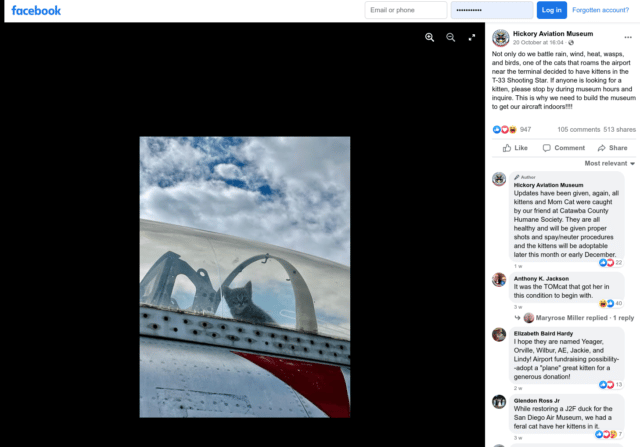 It’s a good thing I’m too far away to be tempted into adopting one of those kittens.

Have a great week!