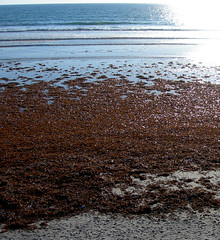 Vraic is seaweed and seaweed, on Jersey, is life.

The agriculture on Jersey, including the famous Jersey Royal potato, owe their success to the fertilising from the sea.

The harvest lasted around two months in the Spring and records as far back as 1299 show that it was frequently the cause of quarrels and criminal charges.

In 1608 an act was passed banning knitting during the vraicing season to ensure plenty of hands for the harvesting.

Jersey retains laws to regulate the harvesting of vraic including the enchanting second article which “forbids the carrying of vraic in boats or by means of a net, other than on the coast of Noirmont, before the third day after the beginning of the permitted harvesting season.” It may be useful to know that exceptions are made for areas which are impassable to carts.

“Grease the land with a good lick of vraic and you can’t go wrong” was the best advice that entomologist Gerald Thomas believes he has ever received. He’s recommending that Jersey return to the traditional harvesting of kelp from their seas to use and sell as fertiliser. But will they allow knitting?