I’m on the road this week and unfortunately, I don’t have the time or the resources right now to research and write on the subjects below. Here instead, then, is a list of the things I would write about if I could.

The flight instructor, who survived the crash, told first responders and investigators he got into an altercation with the student pilot, which resulted in a struggle in the cockpit, a US official with direct knowledge of the investigation said.

The official said it appeared the student pilot was frustrated with his family and said he was being forced to become a pilot.

Not a lot to say on this until more information is released but it is the first case that I’ve heard of where a student has successfully wrested control of the aircraft from a CFI to crash the aircraft. Chilling.

The ExpressJet Airlines Embraer EMB-145LR, flight number 4538 (registration N16954, serial number 145072) departed Grand Rapids, Michigan, on an instrument flight rules flight destined for Newark Liberty International Airport, Newark, New Jersey. After departure, the aircraft deviated north of its desired track to avoid thunderstorms and climbed to its cruising altitude of flight level 370. At approximately 1915 Eastern Daylight Time, the aircraft flew through a large thunderstorm and encountered severe turbulence. The flight crew lost control of the aircraft, and it descended rapidly, losing approximately 4000 feet before the flight crew were able to regain control. The aircraft continued to its destination, where it landed safely. There were no reported injuries to the 3 crew members or 26 passengers, and the aircraft was not damaged.

This accident report by the Transportation Safety Board of Canada is interesting because because it discusses a severe loss of control during turbulence without ending on pilot error. As reports of severe turbulence become more common, understanding what not to do becomes as important as deciding what to do.

The Paradox of Automation

The paradox of automation, then, has three strands to it. First, automatic systems accommodate incompetence by being easy to operate and by automatically correcting mistakes. Because of this, an inexpert operator can function for a long time before his lack of skill becomes apparent – his incompetence is a hidden weakness that can persist almost indefinitely.

Second, even if operators are expert, automatic systems erode their skills by removing the need for practice.

I have a lot of thoughts on this, as you can imagine, but my primary issue with the article is that it treats Air France 447 as indicative of the problems we are facing. That’s like treating landing on the moon as indicative of human travel: yes, it happened but it sure isn’t standard.

The fact is, the pilot’s actions in Air France 447 are so far outside of the norm that it is hard to draw any sensible conclusions, let alone use it as a sensible example of what is at risk.

The article implies that the automation manages to get the pilot into a terrible situation and then hands over the controls, saying here, you do it at the worst possible moment. But that isn’t how it works and that wasn’t what happened in the accident as described. 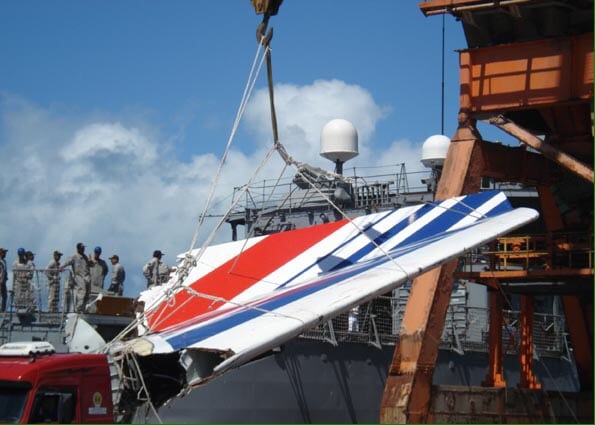 Looking at Air France 447, the automated-car equivalent would be that you were cruising along the highway, completely safely, when the car told you that it had detected an issue and felt that you should take the controls. So you take the controls and drive to a level crossing and then suddenly make a sharp turn onto the railway tracks and drive at full speed towards the lights of an oncoming train because you are frightened of the dark. It’s insane behaviour, goes against the most basic training you’ve had as a driver, and to blame the auto-pilot for shutting off is just a crazy and non-defensible conclusion. We need less automation? No! We need less pilots turning onto train tracks!

Corollary: when there’s a crash in which seatbelts caused a fatality, there’s always a group of people shouting “See! The mandatory seatbelt law is dangerous! If those people hadn’t been wearing their seatbelt they would have lived.” This logic only works if you completely disregard the thousands (or more?) of accidents that didn’t end in fatalities because the car occupants wore seatbelts.

OK, sorry, I guess I had a bit more to say to say on that subject than I realised. Next week I’ll bring you more thought-out commentary. In the meantime, feel free to discuss in the comments! I’ll pop in when I can.