Cliff and I had an appointment in Eastbourne, an English resort city right on the South Downs. As always, we arranged to arrive early, so that a delayed or cancelled flight wouldn’t mean chaos. We flew from Málaga to Shoreham via Bordeaux in a single day, so we ended up with plenty of time to explore the area. 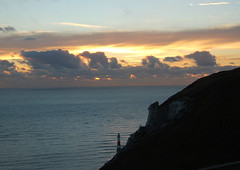 Beachy Head is made up of a 530 foot chalk cliff topped by gentle green hills, the highest such cliff in Britain. The name is derived from from Beuchef, Beautiful Headland, with the additional, unnecessary “Head” being added later. The chalk is an old seabed, the cliffs formed by continents colliding 50 million years ago. Ever since, the headland has been slowly crumbling back into the sea.

The location is notorious for shipwrecks and Trinity house claims that there has been a light shining down from the cliffs to guide the passing vessels since 1670. The first lighthouse was built in 1834 on Belle Tout hill which proved to be a mistake: the lighthouse was often rendered useless by the sea fog.

Beachy Head lighthouse was built at sea level, in fact actually in the sea, in 1902, which solved the problem. The Beachy Head Lighthouse has been automated and run remotely by Trinity House since 1983.

Beachy Head is famous for another reason: it has been known since the 1600s as a suicide spot, especially at night. Partially this is no doubt based on the reputation it now holds – the British Medical Journal explains that “would-be suicides show a tendency to emulate a successful method” and falling 500 feet is almost guaranteed to be lethal. There is also a certain simplicity and immediacy to simply dropping off the edge to almost certain death (especially at night, into the darkness).

http://www.forensicmed.co.uk/beachy_head.htm has an interesting analysis of suicides and “open verdicts” for deaths at Beachy Head, with a list of factors suggesting suicide.

The inclusion of “Male >45 yrs living alone” seemed a bit judgemental in light of the other entries, I thought! 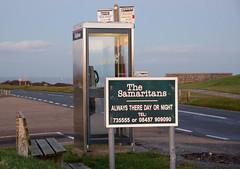 Over the 24 year period of the study, covering 250 deaths, only 11 were accidental, “mostly due to people catching hold of their friends/partners whilst steadying themselves at the cliff edge”. If I’d known this, I would have stood a bit further away from my companion when we were walking there.

The BBC estimated that some 20 people commit suicide at Beachy Head each year but that figure has dropped dramatically as a result of evening patrols from Beachy Head to the car park at Birling Gap: the coastguard stated that they had only seven incidents in 2006.