The Glorious Details of the South Pole Rescue

I wrote a couple of weeks ago about the Twin Otter Emergency Winter Flight to the South Pole, when it became clear that a rescue mission was needed to land at the Amundsen-Scott South Pole Station in the dead of winter.

The mission, carried out by Canadian firm Kenn Borek Air, was successful and two patients were safely evacuated from the South Pole.

The Twin Otter landed on the 21st of June and remained there for 10 hours to allow the flight crew to rest. The aircraft was parked on a wooden platform to keep it from freezing to the snow. The cook at the station cooked them buffalo steak before they were sent to bed with oxygen in order to fend off altitude sickness. The following morning, they warmed up the aircraft for two hours, before getting the two passengers on board and facing the 2,400 kilometre return flight to Rothera. The second Twin Otter, which had remained in Rothera to be used for search and rescue if needed, then took the patients to Chile for medical attention. Both aircraft and flight crews were back home a few days later, where they went back to work on varying assignments.

The Twin Otter aircraft used are short take off and landing 19 passenger utility aircraft which can be deployed on skiis, wheel skiis, floats, regular wheels, and oversized tundra tires allowing them to be used for landing in places there are no runways. These robust aircraft have been in service for many years and are now manufactured and supported by Viking Air of Victoria, British Columbia. The aircraft used were specially equipped for this mission with extra range fuel tanks and other specialty gear.

Aircraft C-GKBG completed the flight to the South Pole and back to Rothera. It is captained by Wallace Dobchuk, KBA chief pilot, the first officer is Sebastian Trudel, and the Aircraft Maintenance Engineer is Michael McCrae. After completing the flight from the South Pole, the crew took required rest in Rothera while the aircraft C-GKBO completed the crossing of the Drake Passage back to Punta Arenas Chile with the patients.

Aircraft C-GKBO is captained by James Haffey, who was also the “I have your back pilot” on the 2003 South Pole rescue mission. First officer is Lindsay Owen, and the Aircraft Maintenance Engineer is Gerald Cirtwill. Gerald has previously led recovery crews on major aircraft incident recoveries in Antarctica. KBO is presently holding in Punta Arena, Chile awaiting the arrival of aircraft KBG.

A first class crew, and we are thankful that they performed their mission professionally and without incident.

The team also shared some of the minor details of the journey, including how they passed the time during the lengthy 10-hour flight to the Amundsen-Scott station.
Dobchuk said they sang songs with the “The Lion Sleeps Tonight,” in heavy rotation.
“For some reason we all had ‘In the Jungle’ (in our heads),” he said, laughing. “We only know two verses… but we sang it for about three or four hours trying to kill the nine-and-a-half hour flight.”
The crew also worried that a spicy Thai soup they snacked on would run out during the mission, Dobchuk said.

I think the most compelling write up on the flight is by Douglas Fox for National Geographic, although it does tend towards the dramatic.

Flight Crew Tells of Harrowing Rescue to the South Pole

The extra weight had shifted the plane’s center of gravity farther back than normal. So as the Otter rose into the dark winter sky over Rothera, its nose pointed awkwardly upward. It was an inefficient way to fly but unavoidable for now. Dobchuk, the pilot, and Sebastian Trudel, the first officer, would carefully manage the situation, pulling fuel first from the rear tank in order to shift the center of gravity and nudge the plane’s nose down over time. 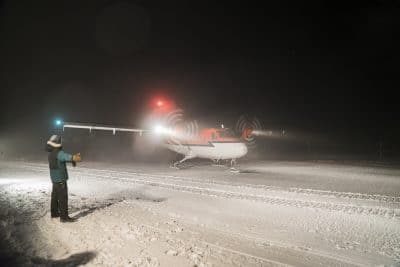 I can’t help but be filled with delight about the entire mission. It’s a wonderfully modern tale of old-fashioned flying, using the best of technology, aircraft and pilots in order to do what only recently was believed to be impossible.