How Much Runway is Too Much?

I have the flu and so I’ve decided that this week, you should write Fear of Landing’s Friday post for me.

This video has caused a lot of discussion on aviation forums and I’d love to know what you think. The video is slow to start as it starts at the stand, so I’ve skipped ahead to the start of the take-off roll at about 01:50 in. If you are reading this on the mailing list, you probably need to click through to see it correctly.

The actual take off is at 02:28 and as you can see, the aircraft definitely did use all the runway.

The video appears to have been taken in July 2017 at Bristol Airport. The aircraft is a 737-800. I can’t see any way of working out which flight or what airport it was headed for.

I found the video posted on PPRuNe (Professional Pilots Rumour Network) where the debate spans twelve pages and is still continuing.

For easy reference, here is a screenshot of the aircraft as it starts to climb. 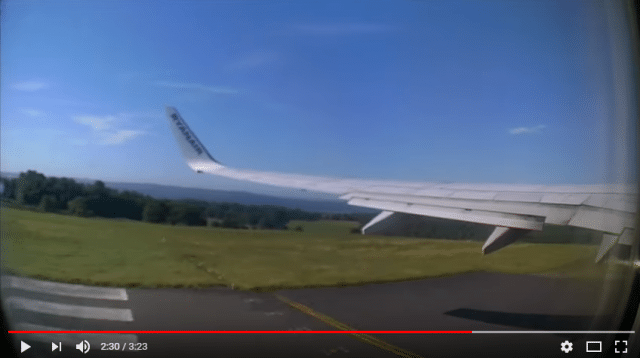 Here are some choice comments, complete with photographic explanations.

So, someone with a smartphone filming from a passenger window is suddenly an expert on aircraft take-off techniques? There is another one on the same site, taken filming towards the tail. And there was me thinking a little knowledge, experience and examinations were needed. Silly me.

Just looking at the timer, it looks to me like a normal take-off. When the take-off lasts more than a minute is the time to get nervous!

I’m sorry but that does NOT look like a normal take-off. Normally one would expect rotation to occur at the latest inside the markings at the far end, but be firmly in the air by the 1000ft to go point. I have rarely witnessed anything tighter than that in the developed world! That was certainly not the case here.

I just showed it to my 7 year old. He knows that it was [expletive deleted] close.

Hard to tell, but that looks textbook to me!

In the N-1 case after V1 but before Vr obviously this RWY is tight, and a prompt rotation at Vr and a steady V2 climb is essential.

I was out of there with a full aircraft , over 4 hrs flight and flaps 25 the other day. No margin except for bleeds off next. Worked like a charm!

The Old Lady will perform! Just make sure you do not let her down if Murphy pulls a trick around V1 and the next few seconds…

It’s a runway 27 departure, MLG couldn’t have been that far off the ground on the piano keys, if not still on it.

Refer to this picture and tell me how much room for error there is. 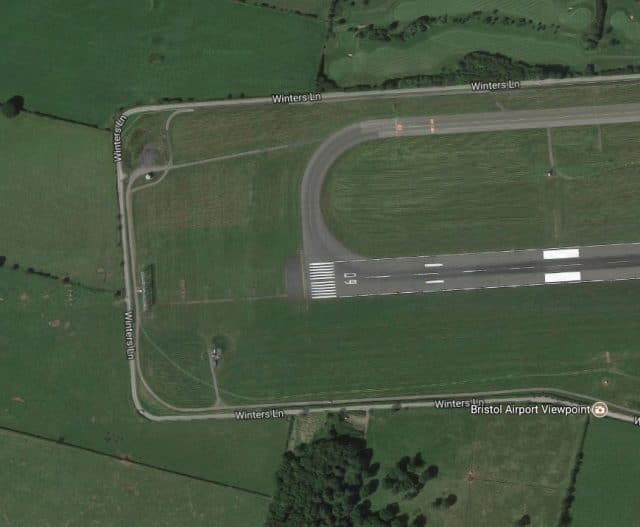 If you look at the wing shadow and the background landscape forward of the wing, it is clear the aircraft is rotating at the 1000ft markers and certainly airborne at the 500ft mark.
Depends on what you call ‘tight’.

Clearly you haven’t had a chance to see the memo O’Leary sent out to crews.

‘We’ve realised that we’re paying for the whole runway, so use the f*cking thing’

(PS Daily mail this is a joke)

“…it is clear the aircraft is rotating at the 1000ft markers and certainly airborne at the 500ft mark.”
Agreed, indeed probably before then..hard to tell because of the image quality but if you use the leading edge wing route/runway edge sightline as datum it looks to me as if rotation has started by at least 1500′ to go i.e. looks like there’s evidence of pitching as they cross the TDZ marker 500′ in/downwind from the main TDZ marking at the upwind end of the runway.

Whether the rotation was slow or not is up to the 737 guys to judge but I’m not sure we can judge off that video. As for height over the runway end.. we all know about possible lenses and forshortening etc, surely that has to be a don’t know?…….

I believe that the Boeing training manual states that with both engines operating and a normal take off performed the aircraft should be at a minimum height of 150′ above the runway end. Check “Go/Stop decision near V1”.

I’ll reserve judgment due to lack of facts about the takeoff performance calculation, but the above is true. The photo is referenced ground markings and they do not lie. The numbers might well have been correct, but the rotation technique not. If PF was fixated on the runway, and also PM, who then forgot to call “V1” or “Rotate” it could be that no-one was looking the ASI. PF saw the runway end closer than ideal, glanced inside, said WTF and rotated. It was not a ‘haul off’ the runway, but still a normal rotation suggesting no panic. But the CVR would have been interesting in those few seconds, and perhaps during a discussion once in crz.

I have been told by finance guys that one of the largest costs involved with the operation of modern airframes is engine maintenance (which can exceed the hull value over its life). The frequency and expense of this correlates very well with thrust/EGT margins on takeoff, so unsurprisingly there is pressure from above to get the job done with the minimum thrust required to meet the regulations.

The performance people have had to get quite creative: we now have AT derates, fixed derates, improved climb, CofG adjustments, packs off, etc. sometimes all used at the same time.
I have noticed over the last few years the end of the runway becoming slightly more prominent on occasions as some of these measures have taken effect but as we are still meeting or exceeding the same requirements as before, it’s more a perception issue than one of safety.

Going back to the video in question, without the FDR and a whole load of other data, I couldn’t definitively say that something was grossly wrong with it. A marginally late rotate call followed by a slightly slower rotation rate would produce the effects noticed on the recording, with the correct thrust setting. If they’d carried on at treetop height for the next couple of miles, then yes but that didn’t happen.

If you want to maximize the payload for a given day and runway there is no need for more runway ahead since you are already committed at an earlier point to go. Clearly there are issues with margin and assuming a proper technique and as always other assumptions in play, it’s at least from a performance standpoint I don’t see an issue not using the whole runway for the run if needed.

For the non-pilots reading this, Clearway and stopway are two different things.

A stopway is an area beyond the designated runway available as extra stopping distance. It may be surfaced with an energy absorbant material. This is clearly inside the airport boundary with no obstructions. Bristol does not have a stopway.

A clearway is a fan shaped area beyond the runway with no obstructions above the minimal angle of climb. Runway 27 at Bristol has no obstructions beyond the ILS antennas because the ground falls away so if you can clear the ILS you are away free. Other airfields will often have buildings, trees etc obstructing the approach and climb out paths to consider.

I downloaded the video, used SMPlayer to split the interesting bits into single frame images, and picked those frames where runway markers were visible, judging the plane’s position by the shadow of its wing. This method is somewhat inaccurate because somewhere in the chain some duplicate frames were inserted (possible to change the frame rate from 25 fps to 30 fps) and the shadow moves as the wings lift up, so when I state that the plane had 40kt at the threshold marker, 125kt at the center of the runway and 150kt over the aiming point, those values are probably fairly close to the truth (maybe +/-2kt?), but ultimately useless.

However, I then cut out images of the 8ft tall winglet in those positions where the wing was over a runway marker (two images for each set of “piano keys”) and aligned them at the runway edge. This makes it easy to see where the plane rotated and lifted off: 450m (1500ft) from the end of the runway, rotating at approx. 1° per second.

Small print: 0s is at 1:57 in the video, as the back edge of the wing’s shadow aligns with the back edge of the “piano keys” (this position is 0m). Pictures 3-12 have the same positional relation to each touchdown marker. The runway image was taken from Google maps and provided me with the positions of the runway markers, assuming those were painted in multiples of 5m.

You’ll need to click on that image above to see it at full-size.

Not to be outdone, a further poster has focused on what can be determined from the shadow of the wing as they travel along the runway.

Despite comments in this thread to the contrary, meaningful metrics can be collected from cell phone video.

In this case, I am looking at the shadow of the wing to judge the relative position of the 737 at it crosses runway landmarks.

That’s averaging roughly 150 knots.
At that point, he still had 350 feet on runway in front of the wing – but did not rotate for another second.

So as best I can tell, this was a delayed rotation.

So, now that you’ve had all the in-depth armchair analysis (there’s more on the PPRuNe thread if you wish to look, including detailed discussions on trigonometry and performance values and the position of the sun at the time of departure!), tell me what you think!

Let me know in the comments! If you are on the mailing list, you need to click through to take part in the discussion! I’m looking forward to seeing your thoughts.