Lasers have many legitimate uses in airspace.

Everyone else probably already knew this but with all the press about lasers in cockpits, I wondered whether the US and the UK would end up as a blanket ban on laser beams in (potential) airspace. I wasn’t aware that lasers are regularly used to signal aircraft.

Lasers are even used, or proposed for use, with aircraft. Pilots straying into unauthorized airspace over Washington, D.C. can be warned to turn back by shining eye-safe low-power red and green lasers at them. At least one system has been tested that would use lasers on final approach to help line up the pilot on the proper glideslope. NASA has tested a Helicopter Airborne Laser Positioning System. The FAA has tested laser-projected lines on airport runways, to increase visibility of “hold short” markings. Because of these varied uses, it is not practical to ban lasers from airspace.

Apparently pilots are not the only flyers that react badly to having a laser flashed at them.

When wildlife becomes a source of danger to aircraft, immediate remedial techniques need to be used. Researchers in this area are focusing on developing and testing tools to actively harass and disperse problem species… One example of a promising technique is the use of lasers. Various types of eye-safe lasers are being investigated, and preliminary tests have shown that these are effective at dispersing Canada Geese at dusk and dawn. Other dispersion techniques that have been tested and evaluated by the FAA include the use of strobe lights, noise makers, and microwaves.

You can point a laser at the ISS station as long as you don’t hit any planes in between.

You do have to let the astronauts know first.

To everyone’s surprise, Pettit could also see the blue laser. “When the spotlights were off, he said he could still see the blue laser, which was shone steadily,” Little said. “I was pretty surprised that the laser light was that visible from space.”

Little ran the laser and he had three people aiding him by watching for aircraft, “It is an FAA offense to shoot an airplane with a laser, so we certainly wanted to avoid that,” he said.

This is a prototype of the laser eye-protection spectacles designed by the Ministry of Defence (photograph is Crown Copyright): 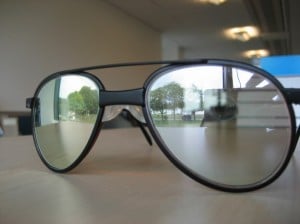 Laser dazzler weapons have been part of the military arsenal since the Falklands War in the 1980s and are regularly used in combat areas. For this reason, the MoD is particularly keen on finding an effective protection against lasers. The trouble is, current eye protection covers only one wavelength of laser light at a time and civilian and military lasers cover many wavelengths. To be effective, anti-laser eye wear needs to provide wider protection.

The new prototype spectacles were developed by Glasgow-based company Thin Film Solution. It uses a composite structure consisting of a polycarbonate layer made with a special light-absorbing dye. This is bonded to the glass lenses with a special coating that reflects certain wavelengths. The result is spectacles that can reflect or filter out different laser wavelengths.

We can’t use lasers to change the colour of the moon.

It’s not a question I think I would normally have considered, but XKCD’s what if series has the full details.

If every person on Earth aimed a laser pointer at the Moon at the same time, would it change color?

Let’s assume everyone has steady enough aim to hit the Moon, but no more than that, and the light is spread evenly across the surface.
At half an hour after midnight (GMT), everyone aims and presses the button.
This is what happens: