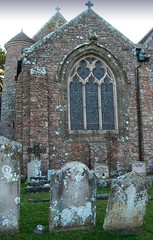 The Parish Church of St Brelade is a romantic Norman stone structure, dating from the 11th century, a reminder of French government of Jersey. I paused to look at the stained glass windows but I was much more interested in its neighbour, The Fisherman’s Chapel.

The Fisherman’s Chapel is a chantry, a medieval pay-for-prayer chapel endowed by the rich to ensure that prayers would be said for their souls after their death. This one is a squat square building, high on a ledge, looking out over St Brelade’s Bay. The location probably led to the theory that the name, Chapelle-ès-Pêcheurs, was to do with the Fisherman’s Guild but this has fairly recently been rescinded. It’s currently believed that the name comes from a corruption of sinners in French: pécheurs.

I have sympathy for this more recent view, I am not very good with orthographics either.

The story goes that the chapel was meant to be built much further inland at a spot better protected from the wind and the sea but, unknown to the builders, the chosen spot was already inhabited by les p’tits faîtchieaux, the fairies. In the night, they quietly picked up all the tools and materials and left them by the shore. The next day, the workers retrieved their items and began work on the foundations. Of course, the little people undid all the work and moved everything back down to the shoreline again in the night. The people took the hint and built the chapel where the tools had been dumped: at the shore of St Brelade’s Bay.

The actual reason for the location is no less interesting: the chapel was built to replace a previous chapel: a simple one-room wooden cell that, according to ancient folklore, was built by Brelade himself. It is quite probable that Brelade travelled to Jersey in the 5th century: he was known to have been on Guernsey and was travelling all over to found religious communities. The exposed location and view of the bay as well as the circular churchyard are all typical of the Celtic religious communities of that time. Certainly there is evidence of a structure from the middle of the 6th century, so the legend isn’t far off.

The current stone structure was built in the late 1000s at the time of the construction of the main chapel. It is quite literally made of the sea, “limpet shells crushed and dissolved with boiling sea water” formed the mortar for the building.

It wasn’t until 1918 that the medieval frescoes were discovered preserved under a layer of plaster: it was these that I came to see. They are incredibly well preserved, angels and disciples in medieval dress portraying the Annunciation and the Assumption. I was thrilled to see that the paintings had not been fully restored but instead reproductions of what they would have looked like at the time are displayed on plastic coated story boards left near the entrance for you to compare to the work on the walls.

We left to amble down the path leading to the perquage, the safe-passage which exists in every parish, the extension of the church sanctuary leading down to the sea where the criminal could board a boat. All around us are the lichen covered gravestones, worn down from the constant salty wind from the exposed position of the graveyard. One large rose-coloured stone in pristine condition caught my eye. It chronicled a family called Davis, starting with a woman born in Jersey in 1866 who died (last, in 1954) in London, her brother and his wife who died in South Africa during the Second World War, their son who was killed in 1916 at the Battle of the Somme in France, and ends with the “two kind and lovable ladies who died at Port Elizabeth South Africa in January 1951”.