Barely home again before it’s time to go. Assuming the weather plays along, we’ll be taking the Saratoga out for an extended trip. We were initially planning an initial stop (well, if you don’t count refuelling) in Dublin, where my mother is at a conference. But having been away last weekend, things have backed up a bit so we’re going to miss Dublin this time around unfortunately. After all this time in the British Isles, I’ve never been to Ireland! I definitely need to get that sorted. 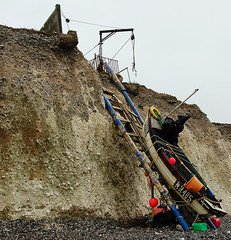 Instead, we’ll fly into North Weald and then meet my mother at Gatwick. We’re going to pick up my son and then all of us are going to spend the weekend at Birling Gap in East Sussex.

Birling Gap is a hamlet on the Seven Sisters cliffs on the South Downs. It consists of a single road ending in a parking lot, where you’ll find half a dozen fishing cottages, a hotel and a lifeguard station. 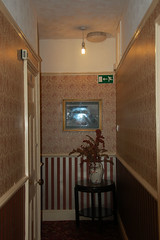 The Birling Gap Hotel describes itself as "a Victorian colonial style villa with its interior furnished in a 1930’s style". The walls are covered with a textured rose and cream wallpaper scattered with black and white photographs of beach goers, covered from their necks to their knees, frolicking on the beach. Dried flowers adorn the corners adding to the feeling of genteel decline.

We stayed there a few months ago on a whim, simply following the road from Beachy Head. A middle-aged woman sat at the front desk as we walked into the building. I imagined that when no one was looking she would stare gloomily at the doorway, muttering about outsiders causing havoc in their small inn. Her bright smile as she greeted us belied my fantasies but still, I couldn’t shake the feeling of DuMaurier’s Cornish inn, the men meeting late at night to drive the ships onto the rocks and keep the bounty. 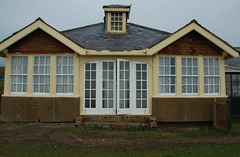 We stayed in the room on the right in this photograph, overlooking the cliff, winter winds driving spray against our windows all night long. It was great. The next morning I went down the rickety stairs to the beach and walked for an hour. 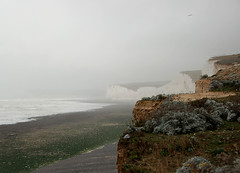 The cliffs are eroding, a noticeable amount every year. The initial row of fishing cottages has already been removed to stop them slipping into the sea. From Birling Gap you are just in view of the Belle Tout lighthouse (now a private residence) whichwas moved back in 1999 to keep it from falling into the sea. A large information plaque informs visitors that the lighthouse will need moving again within the next hundred years, a rather unfortunate circumstance considering this information is right next to the For Sale sign.

I loved everything about the place. If ever I had to meet a stranger with only a moment to judge his character, I would arrange that meeting at the Thatched Bar to watch his reaction to Birling Gap.