This is a fun guest post by my friend John who works at the Royal Vegas casino. I hope you enjoy it as much as I have! 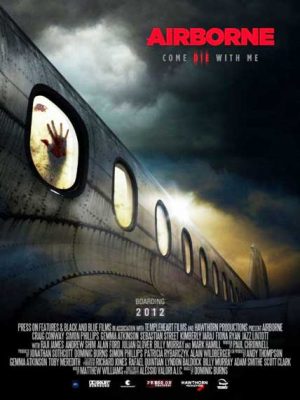 Setting a horror film on a plane also adds another dimension of fear because there is literally nowhere to run. Some of the best horror films that are based around planes and airports are listed below.

Airborne is a film that is set on a 747 that leaves Britain in the middle of a storm. Once the plane is in the air, people start disappearing and it is up to the rest of passengers to work out what is happening before it is too late. The film stars some big names such Mark Hamill and there are also some actors and actresses that are quite well-known in Britain such as Gemma Atkinson and Billy Murray. Although not made with a big budget, the film enjoyed some success. This is similar to the success you can enjoy at Royal Vegas casino after only depositing a small sum of money.

Flight Plan is a film that stars Jodie Foster and Sean Bean. A woman awakes on the plane to find that her daughter is missing and there is no record of her ever being on the flight and no other passengers can remember seeing her. She faces a battle to find her daughter and work out why someone would want to take her before the plane lands and she is forced to get off. This is quite a chilling film and you may feel like relaxing afterwards by playing some games at Royal Vegas casino.

Panic in the Skies

There are no threats to face in this film apart from a malfunctioning autopilot system. The film was made for TV but proved to very popular. The plot revolves around a flight crew that have to find a way to land a jumbo jet after the pilots are killed by a lightning strike. This task is made virtually impossible by the fact that the autopilot is malfunctioning. Further problems arise when officials on the ground start to wonder if they should shoot the plane down to avoid it crashing in a densely populated area.

Snakes on A Plane

Although it is not strictly thought of as a horror movie, you can’t have a list of films that are set on airplanes without including Snakes on A Plane. The film stars Samuel L. Jackson as an FBI Agent who is escorting a witness to give evidence at a trial. Poisonous snakes are released on the plane in a bid to stop the witness testifying which puts all of the passengers and crew in danger. Combining snakes and planes is a real fear for many people and this is one reason why this film has made the list.

Whether you have a fear of flying or not, these films are all well worth a watch. If these movies have got you in the mood to be scared, then you need to check out how Royal Vegas explores the fear of Friday 13th with the games that are on offer.