On the 2nd of January, a group of experienced skiers were at the Anterne pass, in the Giffre massif mountain range in the Haute-Savoie region of the Alps in eastern France. Bruno, a 19-year-old experienced skier, injured his knee on the slope of a steep mountain above cloud level, at 7,400 feet. Nicolas Derely, who shot the video, called for help.

The French Mountain Police helicopter appears through the cloud about 40 seconds in. All I could think was, where’s it going to land? But it nuzzled up to the injured skier like a mother cow to her calf. 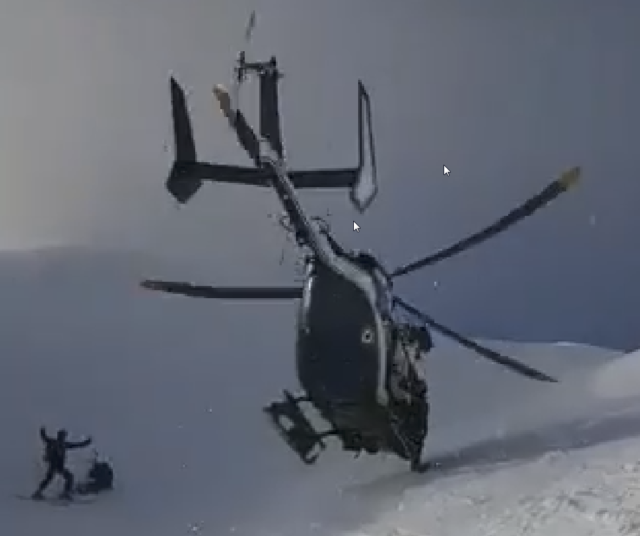 There was no time to spare. The pilot told the BBC afterwards that they chose this manoeuvre, called a “skate support”, in order to get in and out as quickly as possible.

“It gained us some time because the weather in the mountains was extremely changeable, the level of cloud on the pass would have stopped us from intervening just a moment later.”

The rescuers scramble on board and a medical worker grabs Bruno and winches him away on a cable, Mission Impossible style, for what is probably the most breathtaking views of the Alps that Bruno has ever experienced. Then the helicopter rides away into the sunset disappears over the mountains.

Snow was sent flying around as the pilot partially made contact with the mountain to avoid the blades hitting the mountain.

The pilot of the chopper could be seen inching the aircraft close to the off-piste slope with the front of the skids barely above the snow.

The pilot managed to hold the vehicle in place so that the right-hand landing skid remained in contact with the mountainside.

The second half of the video shows the entire incident, starting with the injured skier on the snow while the medical staff strapping his leg ready for transport. Then the helicopter arrives to drop the medical staff on the mountain. No, I’m not sure what’s wrong with just showing it linearly either.

Nicolas Derely, a 60-year-old skier who lives nearby, was surprised to find that he had full mobile coverage and phoned for help before catching the rest of the encounter on video on his phone.

Later, Derely told the press why he’d recorded and broadcast the video.

He is a very good pilot, he knew there were a lot of winds, so he made an approach below.

I was myself a fighter pilot in the French Air Force, so I was aware of the risks and his mastery.

We only wanted to share them because it is still impressive, and allows us to realise how lucky we are to have these guardian angels allowing us all to enjoy the mountain, in all seasons. We also wish a good convalescence to Bruno.

Apparently, Bruno damaged his anterior knee ligament and dislocated his knee cap so here’s hoping he has a full recovery and is skiing again soon!

Thank you to Mike who sent me the video; I love seeing good flying!