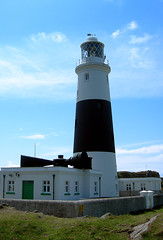 I love it when a random search drops me onto a website which was not, in any way, what I was looking for but absolutely interesting in its own right.

Today I stumbled on this great collection of photographs of Alderney taken by CR LeCocq between 1900 and 1918:

I especially love the shot of the lighthouse being built — I took dozens of photographs of the lighthouse. And take a closer look at the wrecks. I tend to think of them as little stories and lose sight of the fact that we’re looking at real ships and real people. These images bring that back into focus for me.

Speaking of wrecks, I read “Rebecca” for the first time which gave a very real and frightening view of the “wreckers” and the real shock and misery of a sinking ship, let alone the concept that someone might have done this to you on purpose. I’m glad I read it as I think I was in danger of romanticising the entire concept (not that I’ve seen any evidence of actual wrecking so far). It was also interesting seeing the news and the public reactions to the wreck of the Napoli and the mad rush for the loot in Devon.

Is there an implication there that on the small and very poor islands, it was a different scenario? There was a fairly recent wreck near St Mary’s that I made some notes to find out about, it would be interesting to see whether the media coverage is similar.