A Visit to Blackpool ATC 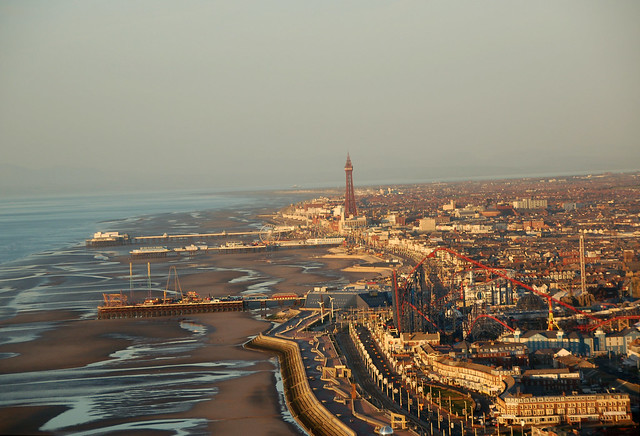 Visit ATC Day is an annual event coordinated by the Airspace and Safety Initiative in the US, allowing pilots to sign up for tours at Air Traffic Control units around the country. This year, the event was held with events in October and November. I couldn’t make the Prestwick date but I was lucky enough to score a personal tour around the Radar and ATC units at Blackpool.

Sadly, I was not flying in on this occasion. Last time I came in over the sea and had a stunning view of the promenade and the roller coaster at Blackpool Pleasure Beach before landing on the 1,869 metre (6,131 feet) runway.

This year’s visit was by car and we discovered that finding a parking place was much more difficult on four wheels than it had been when we arrived at the airport on three. 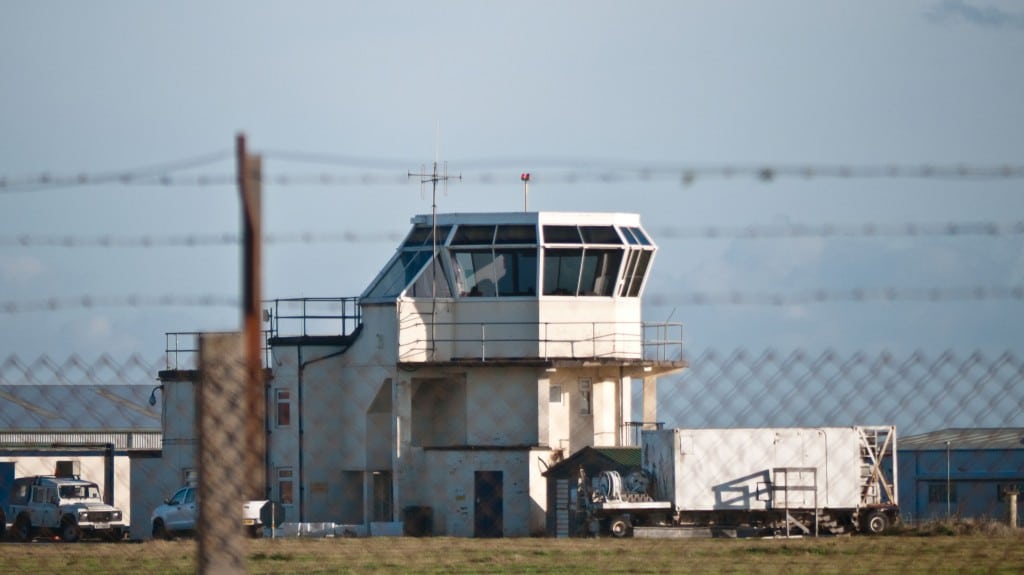 Security is a priority at any large airfield these days and Blackpool was no exception. We ran our bags through the metal detector and were given badges to wear around our necks. I was rather amused to see that my badge identified me as representing Fear of Flying.

A man in a Landrover picked us up. He also had to go through security as he had crossed the red line in order to get us into his car. Suddenly, a bird of prey swooped low over the nearby taxiway as if to check us out. Our driver made a radio call. A professional female voice responded on his radio – ATC were clearing us to the Tower! – and we were on our way.

On our arrival, a friendly blonde woman took us into the Radar room and showed us around. She was quick to reassure us that she loved General Aviation aircraft, even if they didn’t always make her life easy. Blackpool is very generous with airspace: aircraft are in Class G airspace until they climb into Class A, which means that Blackpool ATC needs to direct traffic around General Aviation traffic flying through the area.

The radar room had no view of the outside, everything was focused around the equipment. She showed us the monitors and explained the difference between her primary data, showing the range and bearing of objects through basic radar object detection and the secondary data, including aircraft identity and altitude as reported by the aircraft’s transponder. She apologised for the fact that her equipment was a bit outdated.

“I went to a museum,” she said, “where they had a display on airport radar and the equipment, there on display, was more recent than our equipment. We could trade ours in, I told them. Get an upgrade!” She laughed but was quick to point out that new technology has its own issues. The easiest way to demonstrate this was to show us a strip. This is not as exciting as it might sound. 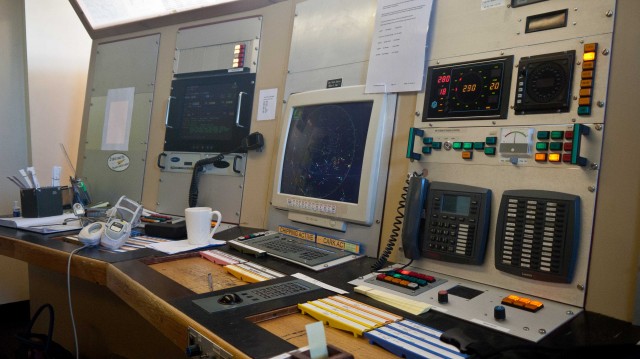 A flight progress strip is a piece of paper which has the details of a specific aircraft in the area. It is held in a coloured strip-holder which identifies the aircraft based on its relationship to the airfield: one colour for inbound, one for outbound and a third for local traffic. This strip in its holder acts as a physical representation of the flight in her sector. The strips position on her desk represents the current situation of the aircraft in terms of level, altitude and clearance.

The room filled with a buzz and an aircraft called in. I was amazed at the change in her demeanour and speech – she was the professional clipped voice we’d heard earlier. As she spoke, she picked up a strip, scribbled something onto it and placed it to the left of where it had been.

On a computer screen, she said, the planes were just a list of data, which was less easy to manage. “It’s a physical thing,” she said, once the call was finished. “I have this aircraft, I know where it is, I know what I last told him. If I end up with too many planes at once, I can use more of the desk. If that happens on the computer, I get a scroll bar. Now some of the data is out of my line of sight. It means I could lose a plane.”

She then took us up a narrow spiral staircase to the top. The view was amazing! The Tower didn’t look particularly high as we drove up but now I realised I could see for miles. The flying aircraft which had been just blips on a screen downstairs were easy to spot and I had a clear view of the entire airfield: the hangars behind us and the taxiways either side with the runways straight ahead. I missed the entire first few minutes of our introduction to the upstairs as I stared out the windows. 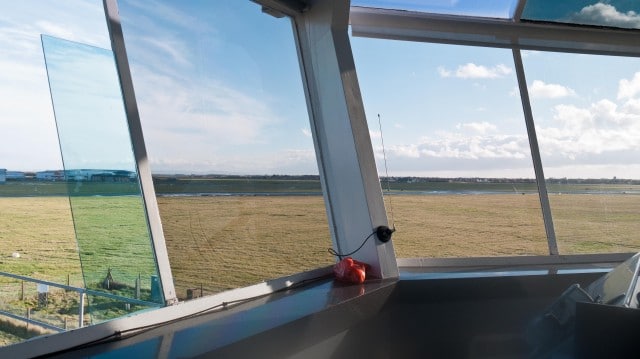 The controller rose from his seat and invited us to take a look around. On his right was a woman who he introduced as an Assistant Controller who, to my surprise, had been at Blackpool longer than any of them. She had her own comms and a computer and printer to her right. He had a radar display with the same data as we’d seen below but the display was set off out of the way, to the left side of a monitor showing the runway and surrounds. “This is the lights,” he explained. He was able to check and control any of the taxi-way and runway lights individually from this unit. Next to it was a meteorological unit and wind display showing the direction, average knots, gusting and current crosswind component for the runway (“I wish I could get that data when up in the air,” grumbled Cliff).

In front of the two controllers was a grand view of the runway and various buttons and displays and comms – including a traditional telephone. The flat area of the desk was made up of separate recesses filled with strips.

Up here, it was easier to understand how the separate areas on the desk represented aircraft situations. There was a bay for the ground, the runway and the air. The position of the strip (and whether it was flat or tilted) signified the clearance and location of the aircraft. He pointed out that the system meant that anyone could see what the current status was. “If something happens to me, even if it is sudden, it is immediately clear to any other controller what I’ve done, what is going on and what needs to be dealt with” 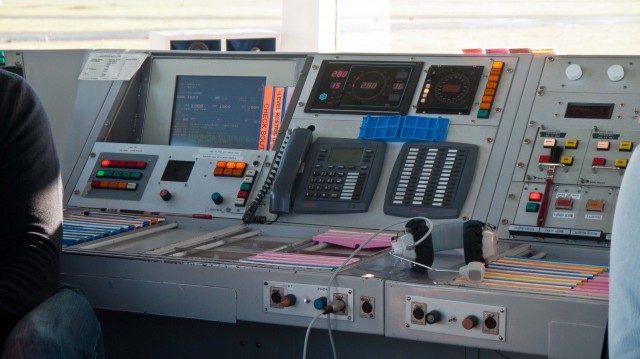 One of the strips did not have aircraft details but instead simply said FALCON in big black letters. I remembered the bird of prey we’d seen earlier – but surely it didn’t need ATC clearance? “That’s our bird control guy,” the controller explained. “He does a little bit of everything to keep the gulls away from the runway. You saw his peregrine falcon. He also uses scarecrows, lights and noise-makers, you name it.” He pointed out to a small boxy vehicle near the threshold of Runway 28. “That’s him there.” In between flights, the controller moved the FALCON strip onto the runway bay as the Assistant Controller spoke to the man on her radio. The vehicle zipped along the runway and then cleared it at the far end, at which point his strip was moved to the left.

Our blonde friend from downstairs came up the stairs and the controller stood up to get out of the way – it was time for his lunch break. As she took over the left-hand seat with a quick glance across the bays, the radio buzzed into life. “It’s like buses,” the now off-duty controller told us. “Nothing and then four at once.”

He showed us the aircraft that she was dealing with: a 737 ready for push-back, two single engine aircraft taxing from the flight school towards the runway, and three aircraft in the air of varying sizes. We gathered around to watch her sort out the mess. I struggled to keep up with the different aircraft but she took it in stride. As a GA aircraft came in, I watched its strip move from approach bay to the runway bay (once cleared) to the taxiway bay and then finally, once the aircraft was parked, the strip was handed off to the Assistant Controller for data entry. Meanwhile, I’d lost track of all the other aircraft.

“Cleared for take-off,” she said to the 737 which was at the threshold. She stared at the runway and muttered under her breath, “Come on, hurry up.” She flushed pink when she saw that I’d heard. “It’s just I can juggle all this lot if he moves quickly,” she explained, waving a hand at the aircraft she was dealing with on the ground and in the air. I couldn’t keep up with the list of concerns she was tracking: wake vortex, holding patterns, and then there was the falcon vehicle who wanted another race down the runway. Three minutes later, she had all the pieces aligned and everyone moved on. She handed off another strip and gave a contented sigh. It was quiet, if only for a short time. 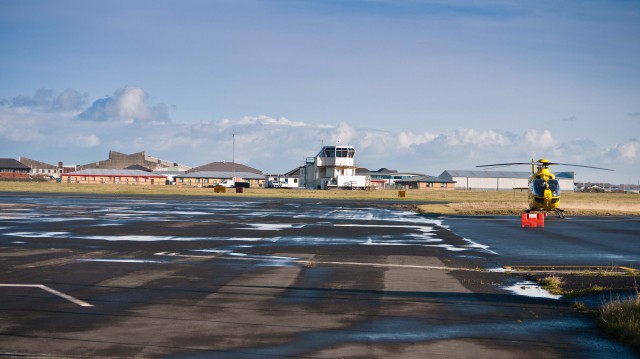 The visit was fascinating and gave me a wonderful view of the people on the other side of the radio. Thank you so much to all the staff at Blackpool who made us feel so welcome and took the time to answer all our questions.

The annual Visit ATC dates scheduled by NATS have finished for this year but if you get a chance, do try to sign up next year when I’m sure a number of ATC units will be opening their doors to pilots and interested parties again.

And hey, if any other airfields would like to offer me a tour, please let me know. I would love to come visit!