The Destruction of a Dream

There is only one aircraft type where I have always used the definite article when writing about it: The Antonov An-225. The An-225 is a one-of-a-kind cargo aircraft designed by Antonov Design in then-Soviet Ukraine. The aircraft’s name is Mriya, literally “Dream” in Ukrainian (Мрія). This massive aircraft with six turbofan engines is capable of carrying 640 tonnes as it was originally designed to transport Russian orbitors. Its maiden flight was on the 21st of December 1988. Mriya was a working aircraft but also offered a flyover and wing wave on the 24th of August 2021 as a part of the celebrations for Ukrainian Independence Day.

To give you an idea of Mriya’s size, the first powered flights of the Wright brothers, which were between 120 and 200 feet in distance and ten feet above the ground, could have taken place in their entirety in the cargo hold of the An-225.

A second An-225 was started but Antonov was unable to gain the funding to complete the aircraft. It is unclear where the partially completed airframe is located at this time or what state it is in.

On the morning 24th of February, Russian forces invaded Ukraine and somewhere between 20 to 34 Russian helicopters were sent to secure Antonov Airport (also known as Hostomel or Gostomel Airport), northwest of Kyiv. The Antonov Airlines base was of strategic importance as it would allow the Russians to form an airbridge to bring in troops and equipment close to Kyiv.

Mriya was at the airport at the time of the initial attack and its hangar was bombed during the fifth air attack. The following video was released showing the fire and damage at its hangar.

The Russian forces took the airport quickly in the surprise of the initial invasion but the Ukrainian troops were able to encircle the airport and drive out the Russian troops into the woods. However, it was too late to save Mriya. It was only a temporary reprieve as Russian ground forces advancing from Belarus were able to take the Antonov Airport and the town of Hostomel the following morning. Some reports claim that the Ukrainians deliberately destroyed the airfield before abandoning it to the Russians.

As of this writing, Ukrainian forces are continuing to bombard the Russian armoured vehicles in and around the airport. Ukrainian security services claim they have intercepted a message from Russian forces in Hostomel requesting to be evacuated.

The battle is relatively well documented on the Wikipedia page Battle of Antonov Airport.

Antonov confirmed on the 27th of February that Mriya had been destroyed but asked for people to please wait for official announcements about the condition of the aircraft as it has not yet been possible to inspect the damage done.

However, a statement by the Ukrainian state arms manufcacturer (and Antonov’s parent organisation), UkrOboronProm, said that the restoration of Mriya would cost over three billion US dollars and take over five years. They stated that their task would be to ensure that the Russian Federation paid for the plane to be rebuilt.

This unattributed photograph said to have been originally published in Russia shows the nose and one engine of the aircraft. Note that in contrast to the embedded video on Twitter, all of the Russian damage has been cleared out of shot. 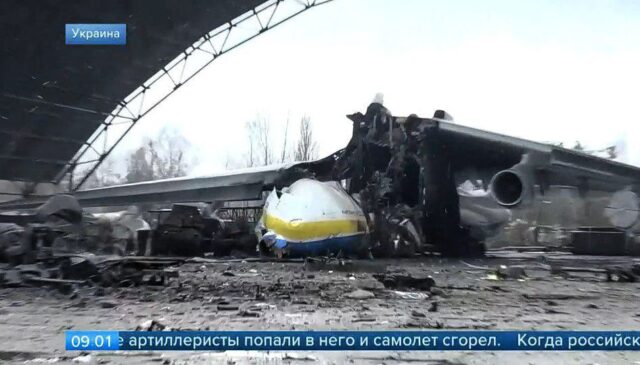 The Antonov An-225 Mriya is “just” an aircraft, of course, and just a small part of the losses in Ukraine during this assault by Russia over a sovereign nation which is not, whatever Putin may claim, still a part of Russia. But Mriya is also a symbol of Ukrainian engineering and technology. For me, at least, it is a clear representation of the devastation that is being reigned upon the country at this very moment, while we sit safely in our homes and our offices and our cars.

The biggest plane in the world "Mriya" (The Dream) was destroyed by Russian occupants on an airfield near Kyiv. We will rebuild the plane. We will fulfill our dream of a strong, free, and democratic Ukraine. pic.twitter.com/Gy6DN8E1VR

Ex-RAF commander of operations Greg Bagwell has posted in favour of the the enforcement of a No Fly Zone in response to the Russian aggression. He argues that at this stage, a No Fly Zone is needed to defend sovereign Ukraine airspace and would be a clear act of self defence and as such, it should not be dismissed as escalating tensions. It seems to me that we are past the point of worrying about escalating the conflict, as if the loss of Ukraine is worth it to keep the Russians quiet.

You can bet that all of us here in Estonia are watching the responses of NATO and EU very closely, as there’s very little doubt that we would be next on Putin’s list of conquests.

I hope that Ukraine will soon be victorious against its aggressors and that Mriya, the An-225 aircraft but more importantly the country’s dream of a safe future, will quickly be restored.