This is a guest post by John Hill, who originally shared the story on the Professional Pilots Rumour Network. John’s been flying all his life and his story of a lessoned learned after a hurried walk-around is as intriguing as it is instructive. I hope you enjoy it as much as I did.

I’ve been mighty lucky in my flying life. Glider pilot at 16, PPL at 17 on a Tiger Moth, sponsored cadet with a legacy carrier in my early twenties, right seat of a big jet with 400 hours, and then the airline I worked for had a need for helicopter pilots and I was selected for rotary training. 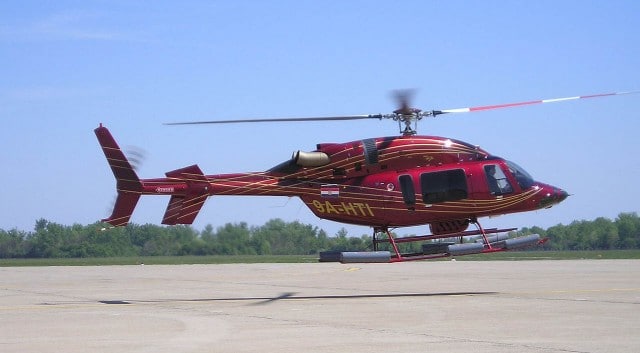 My rotary instructor was a huge bear of a man called Jake Jackson. Ex-Colonel in the Army Air Corps who had lived a very charmed life, Jake insisted that his students applied the same high standards he did, happily using violence if he believed that the student’s standards were slack. His cry of “gently boy! Gently! Its’ like w***ing a hamster! If you don’t do it gently it’s f***ing messy!” as I learned the art of hovering still comes through my headset every time I pull power in a helicopter.

One hot summer day, I was sent out to get an aircraft started ready for Jake to join me. I can’t remember the exercise, I just remember Jake storming out to the aircraft, opening my door, yanking me out and nearly throttling me by my tie (training was so much more formal then) as he roundly criticised my walk-round.

Fast forward twenty years and you would find me on a beautiful summer Saturday evening parked at a landing zone on the England/Wales border. My job for the evening was to collect a regular customer and fly him in to Bristol to meet his jet so he could clear off to Barbados on holiday. The customer was well known in powerful circles, deliciously indiscreet, fun to be with and at one time had a PPL/H [private pilots licence for helicopters] so he liked to sit in the front with me and chat as we flew.

The helicopter was nearly brand new: it had only flown twenty hours on top of its test flying and acceptance flights, it was a very comfortable and capable IFR twin with eight passenger seats, great avionics, useful range and best of all, really comfortable, sheepskin-covered pilots’ seats.

The only slight snag was the weather, which although wonderful was due to deteriorate to OVC at 700′, viz about 2k* at base, which would be closed on arrival (I was on an out-of-hours indemnity) but I knew that following the NDB/DME profile for noise abatement would guarantee my arrival.

*[Overcast at 700 feet (low cloud) with visibility of two kilometres.]

Eventually, the customer finished his meeting and we left for Bristol as the daylight faded. Bristol ATC got me in with their usual efficiency and then it was a brisk left turn into the handling agents, land next to the jet, shut down and see the passenger away.

It was at this point that my evening started to go wrong. I needed fuel and the bowser was held up. Eventually (after an hour) it arrived and with the tanks topped to full I prepared to leave, to find the handling agent waving in front of me, he came up to the aircraft and told me my credit card had been refused (I had phoned ahead with the number to save time) and I would have to go into the office. In the office I found that the office staff had transposed two numbers; they swiped the card and the payment was made. I dashed back to the aircraft, now under pressure because my out of hours indemnity ended at midnight and I was going to be really pushed for time.

Rather than jump in and go, I quickly carried out a second walk round, looking at, pushing, pulling and waggling anything that could be looked at, pushed, pulled or waggled. Then I jumped into my seat and requested start and clearance to my base. Due to IFR inbounds, I was going to have to initially route southwest before turning back northeast, crossing the inbounds and picking up my route home.

Eventually airborne, I followed ATC’s instructions and after about ten minutes was heading northeast. The wind was almost calm and I could clearly see the inbound airliners, suddenly there was a huge thump of turbulence. I went light in my seat and the aircraft rolled forty degrees either side of upright. Guides and maps went everywhere and I heard a slight rattle. I had hit the wake of a Boeing 757 with his flaps down, which some of you may be aware has some of the worst wake turbulence ever.

I got my breath back as the aircraft settled back into the cruise, and shortly afterwards was transferred to RAF Brize Norton Control Zone for transit. While crossing Brize a “new aircraft snag” cropped up. I was constantly having to increase power as the collective* kept gently lowering itself and the collective friction was struggling to cope. In frustration I re-set the power to max cont and really wound the friction tight; as I did so I noticed that the collective was actually quite happy to stay where it was for a change.

*[The collective control changes the pitch angle of all of the main rotor blades at the same time (collectively), independent of their position, in order to increase or decrease the total lift derived from the rotor.]

I needed some thinking time. I programmed the hold at base into the navigation system and sent it off to fly the hold while I worked out what had happened. I had by now completely loosened the friction, and found there was some limited but spongy movement. We train for control restrictions in the simulator and I knew that a stuck collective at high power was one of the hardest to deal with. However my brain was starting to work again: that clatter as I had hit the wake turbulence. I checked all around the area of the P1 collective but could see nothing, I shone my torch across to the P2 position and realised the P2 seat belts weren’t buckled. In the hurry after the delays I has forgotten to check them.

I reached over as far as I could and saw the P2 buckle jammed between the P2 collective and the seat base. It had dropped down in the turbulence and as I had pulled back to max cont, it had slid into position and jammed the collective completely. I tried more downward pressure on my collective to no avail. There was nothing else for it.

I took off my straps and very gingerly slid across the centre console, making sure I didn’t touch anything vital (like the auto-pilot controls, disconnecting them could have been mighty interesting in that position!) Once in the P2 seat, I spent ten minutes freeing the buckle while the aircraft flew the hold. My weight on the seat made the situation worse by making the cushion spread outwards. With the buckle finally free, I fastened the straps behind me and climbed extremely carefully back into my own seat.

The remainder of the flight in falling weather at night into a closed airport was an anti-climax. But ever since, whenever the P2 seat is vacant, my final pre-take off, pre-landing, or en-route check is always to grab the P2 straps and pull them hard. Security is not just your straps being done up.

Thank you John! Both for taking the time to write about his experience and allowing me to share it here on Fear of Landing.

Category: I learned from that,