The Worst Aircraft Ever Constructed

Dr William Whitney Christmas (1865-1960) loved planes. He claimed to be one of the first aeroplane pilots: Dr Christmas said that he made his first flight in 1908 but he burned the aircraft in order to protect his design secrets. In his lifetime he patented 300 inventions to do with aviation. This, despite the fact that he had no background in aircraft design nor aeronautics.

As a result, the practicalities of his inventions left something to be desired.

Dr Christmas’s recorded aviation career effectively began with the Red Bird, a bi-plane that he designed, built and then flew (confirmed) in 1909. The aircraft looks interesting enough in isolation.

Christmas did patent, build, and fly a biplane of his own design in 1909. This aircraft, known as the Red Bird, was representative of many of his later designs and can be distinguished by its anhedral (down-sloping) upper wings and dihedral (up-sloping) lower wings. Another noteworthy tidbit about this design is that it appears to be a virtual copy of a plane built by a company named AEA that was, interestingly enough, also known as the Red Bird. In the words of one historian, “the eccentric Dr. Christmas was not above employing the ideas of others” and may well have patented another company’s design!

As a result of the success of the Red Bird, Dr Christmas gave up medicine to devote himself to aviation. He formed the Christmas Aeroplane Company.

Mr. Christmas and his Flights of Fancy

In a New York Times article written by Christmas himself on 5 December 1915, he outlines his aircraft designs to be used by the military. The article notes that “his warplanes would be the largest heavier-than-air crafts ever built, powered by a 1600 horsepower motor, and able to carry bombs and other ammunition, in addition to a six-person crew.” Furthermore, the article mentioned that the European Allies had already ordered eleven of his Battle-Cruisers, but his warplanes were never sold and his deal with the European Allies turned out to be a hoax.

Dr Christmas convinced Henry and Alfred McCorey to back him to create a warplane. Then Dr Christmas pitched two aircraft designs to Continental Aircraft Company and proposed a plot to kidnap Kaiser Wilhelm II of Germany. The plot, of course, required the use of the aircraft he was to develop.

Dr Christmas designed the Christmas Bullet as a military scout plane with help from the Chief Engineer at Continuental, Vincent J Burnelli. Burnelli made a point of stating that he was only involved in the design of the veneer-clad fuselage and expressed serious concern about the design but to no avail.

The first Bullet’s engine was a prototype Liberty Six on loan from the US Military, which was meant for ground-testing only. The rest of the construction materials were apparently scrounged from available wood and steel stock and not aircraft grade, said Bernelli. The single-seater bi-plane was designed with flexible wings with no struts and no bracing. These cantilevered wings were designed to flap like a bird during flight.

The war ended before the aircraft could be used by the military, some say because no pilot could be found willing to fly the thing.

Finally, Cuthbert Mills, an Army pilot, agreed to take it up for a test flight in January, 1919.

The wings peeled straight off and the aircraft crashed, killing the pilot and destroying the aircraft, including the prototype engine on loan from the military.

Not at all discouraged, Dr Christmas created a second Bullet and managed to convince the military to supply a propeller – he had not yet admitted that he had destroyed their prototype engine. The second Christmas Bullet was featured in Flight, the oldest aviation news magazine still in publication. In February 1919, Flight wrote that “it would seem that such construction would result in a low factor of safety, but the designer claims a safety factor of seven throughout.” Dr Christmas displayed it at the New York Air Show in March, where he advertised it as the safest, easiest plane in the world. 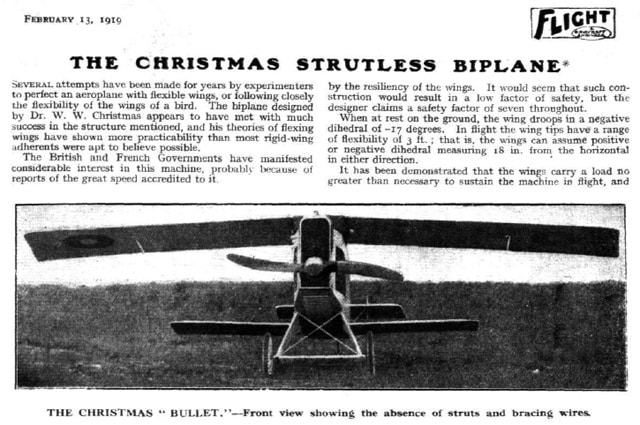 The test flight of the second plane also resulted in a structural failure and immediate crash, killing the pilot and destroying the aircraft as well as a barn.

The Christmas Bullet, the “safest, easiest plane in the world”, had two take-offs, no landings, two crashes and two dead pilots.

Dr Christmas claimed he received a million-dollar offer to rebuild Germany’s air forces and then later stated that he sold the patent for his flexible wing design to the military in 1923 for $100,000.

If that is true, it strikes me as quite possible that they did so simply to stop him building further planes.