The Mystery of Pan Am flight 7

Pan Am trip number 7 was an around-the-world flight which disappeared at sea, never to be recovered or understood.

The aircraft was Pan Am ship #944 (registration N90944), a Boeing 377 Stratocruiser Romance of the Skies. The Stratocruiser was “the ocean liner of the air” with Pullman-style sleeping berths, reclining seats with 60 inches of legroom and a large cocktail lounge. Champagne and caviar were served to start off the meals served on china plates. There were 36 passengers and eight crew.

The round-the-world trips started and ended in San Francisco. Pan Am trip 7 was on its first leg of the flight. On the 8th of November, the Romance of the Skies departed San Francisco normally at 11:51 PST (local time for San Francisco) for its ten-hour flight to Honolulu.

At 16:04, the Captain made a routine position report to the US Coast Guard cutter Pontchartrain, which was located at the halfway point between the mainland and Oahu. The Romance of the Skies was on course and on schedule. This was about the time that the passengers would have sat down for their seven-course gourmet dinner. That radio call was the last contact with the aircraft.

The last position report received was at 01:04. There was no distress call or any indication of trouble, but the aircraft never arrived at Honolulu.

The Coast Guard sent out a search plane to look for the airliner, which carried 36 passengers and a crew of eight. The Coast Guard also alerted crews of two cutters to be ready to take part in the search. United Press International (UPI) reported that submarines USS Cusk and USS Carbonero were the closest vessels to the point where the plane was last reported and were diverted to the search. The last radio report from the plane came when Capt. G. H. Brown made a routine check.

The search and rescue mission grew rapidly until it was reported to be the largest peace time response since Amelia Earhart went missing. Six days later, the US Navy carrier Philippine Sea discovered debris off course: 940 miles east of Honolulu and 90 miles north of the aircraft’s intended track.

A flotilla of small boats delivered the bodies and debris to the US Navy carrier. They found a 33-square-mile area of debris. In that area, there were fifteen bodies floating in the water with no shoes on. Most of them wearing life jackets from the aircraft. Three of the bodies were found with wristwatches stopped at 16:26, giving investigators the exact time when the Romance of the Skies impacted the water.

The bulk of the aircraft and remaining passengers and crew had sunk to the bottom of the Pacific and has still not been salvaged.

The state of the passengers meant that they had time to prepare for the aircraft to ditch. In addition, some of them were found to have higher than normal levels of carbon monoxide. However, the wreckage that was recovered had burn marks only above the water line, which means that although there was a fire, it was post crash. There was no evidence of an in-flight fire. The passengers did not die from carbon monoxide poisoning and only a few showed impact trauma; most died from drowning.

This means that the aircraft did not crash into the water at high speed.

This is bourne out that the wreckage was found 90 miles north of track, which implies that the aircraft continued to fly after something went wrong. Investigators believed that the aircraft impacted the water with the nose down and the right wing lowered.

No probable cause was ever discovered and to this day that tragedy that befell Pan Am ship #944 on flight 7 to Honolulu is a mystery. Theories include on-board bombs and faulty propellers. Many believed that the crash was a suicide: an unstable crew member who had been diagnosed with a fatal illness taking the plane out with him. “He was too chicken to go alone,” his step-daughter told journalists.

There’s also a suspicious passenger: a middle-aged man who took out three life insurance policies, two of them purchased just three days before the flight. The man was an innkeeper but he was discovered to have been a demolitions expert in the Navy. He had previously burned a heavily insured lodge to the ground and collected the payout. 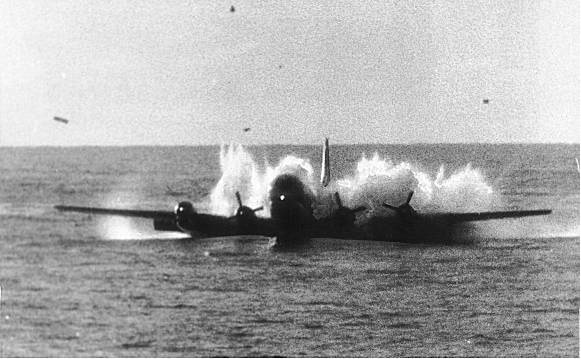 A year before, the sister ship of the Romance of the Skies, Pan Am ship #943, ditched on the last leg of its around-the-world-tour, flying from Honolulu to San Francisco. The 943 had an overspeeding propeller and an engine failure. The aircraft managed to circle until daybreak and then ditched in the same area, next to Pontchartrain. The aircraft and the rescue were filmed. Everyone on board was saved.

Pontchartrain was the same clipper who received the final radio call from the Romance of the Skies. It’s possible that the aircraft suffered the same fault: An Airworthiness Directive was issued as it was one of many cases of loss of propeller control but there are some that believe that the directive was never carried out and that a similar overspeed event afflicted the Romance of the Skies. However, it remains odd that there was no mayday call or any sign of distress. In addition, the aircraft continued to fly away from Pontchartrain, making a rescue unlikely even if they were able to successfully ditch.

Between 1962 and 2006, the NTSB have logged 363 instances of vanished aircraft, most of which disappeared over the water.

It’s frustrating not to know and tempting to fill in the blanks. But sadly, we will probably never know what happened that day.