The Disappearance of Aeronaut Walter Powell 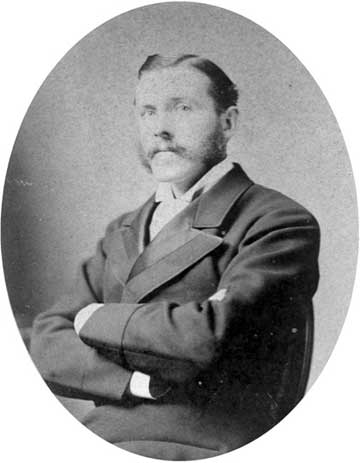 I meant to be researching something else entirely but then I stumbled upon the sad story of Walter Powell, a Welsh gentleman born in 1842 who disappeared in 1881.

Walter Powell, the Tory Member of Parliament for Malmesbury, took up ballooning in 1880 after the death of his wife. He received training and soon had his own balloon made for him. The red and yellow striped silk balloon used hydrogen gas and was designed by his friend, James Templer.

Colonel James Lethbridge Brooke Templer is considered the godfather of the modern Royal Air Force. He pioneered the British military use of balloons and airships. In 1878 Captain Templer started a British Army balloon school in Woolwich, using his own balloon, Crusader. Templer was also the Instructor in Ballooning to the Royal Engineers and commanded the military balloon department at Chatham.

Walter Powell became an avid balloonist. He had a dream that one day a balloon would be able to fly across the Atlantic to America. Ballooning took over his life.

In Malmesbury they looked at their Member’s new interest with tolerant amusement. We read how in October 1880 when Walter Powell was to have proposed the election of the town’s new coroner he had to send a telegram of apology as he would be up in a balloon then. There was much friendly laughter at the meeting when the message arrived, and jokes were made about the hope that they would not soon be needing to elect a new M.P. as well.

Captain Templer often used balloons to make observations for the Meteorological Office. On the 9th of December, 1881, London was enveloped by a very peculiar fog and Templer wished to ascend to investigate the conditions which had produced it. The Meteorological Society had been given access to the newly developed military balloon Saladin from the War Office and it was available to Captain Templer for an ascent to measure the temperature and atmospheric conditions which had produced the fog. The Saladin was moored at Bath.

Captain Templer arranged a flight for the 10th of December and invited the 39-year-old Powell to attend to the balloon, which would leave Templer free to make his observations. A gentleman by the name of A. Agg-Gardner was also invited to join them.

Saladin was a green and yellow calico balloon which used coal gas. The balloon rose when sacks of ballast where dropped out to reduce the weight. A valve in the balloon neck allowed the balloonists to let out the gas, reducing the lifting power and bringing the balloon down. The direction was dependent on wind and air currents.

They departed from the field at Bath Gas Works on the 10th in poor conditions and passed over Wells at 4,200 feet. They passed over Glastonbury and then a current of air blew them between Somerton and Langport. Here, they rose to 5,000 feet to investigate a bank of cloud and then sank to 2,000 feet and drifted towards Crewkerne.

Visibility was poor. Captain Templer heard the roar of waves and realised they were within half a mile of the sea nears Eypesmouth, west of Bridgport. The balloon was now rapidly drifting towards the sea and Captain Templer felt that the descent was critical.

Captain Templer reported the final moments to the Meteorological Office:

’Crewkerne was sighted when we were at 2,000 feet altitude, and Mr Powell allowed the balloon, at my request, to descend, and we passed Beaminster, where we first heard the sea, and immediately I verified my position, and we prepared to effect our descent. The horizontal velocity was increased to thirty-five miles an hour. The balloon was descending most favourably near Symondsbury when Mr Powell threw out some ballast. On his telling me that he had done so I immediately opened the valve. He then asked me if this was necessary? I answered, “We are nearing the sea,” and he replied “I am afraid I rather overdid that last ballast.” Glancing downwards I found that our pace had increased.

The Saladin touched the ground less than 150 metres (450 feet) from the edge of a cliff. The “landing” was uncontrolled and violent. Captain Templer half-fell, half-disembarked from the balloon as the car capsized, still holding the valve line in his hand. The balloon rose sharply as a result of the change in weight and Agg-Gardner fell out as well, breaking his leg in the process.

Powell remained in the car as it righted itself. Captain Templar was dragged along by the valve line and shouted at Powell to come down. The car was still just 2.5 metres / 8 feet above the ground but Powell did not jump. The valve line was ripped from Captain Templer’s hands as the balloon rose. Templer said that he believed that Powell stayed with the balloon hoping that he could save it by bringing it down on the beach. The Captain said that it was possible with the light weight that the balloon might even make it across the Channel.

Powell was last seen waving his hand to Captain Templar as the balloon was swept out to sea. No trace of Powell was ever found.

Two years later, the New York Times reported that the remains of Saladin had been discovered. Fragments and shreds of cloth were recovered in the mountains of Sierra del Pedroza in Asturias, on the northwest coast of Spain.

The balloon had in fact made it across the Channel and even the Bay of Biscay, but of its passenger there was no sign.