Landing in a Corn Field

I’ve been browsing old photographs again, and found an amazing pair of a Lockheed Constellation from 1951.

The Lockheed Constellation, affectionately known as the “Connie” is an easy aircraft to recognise. The propeller-driven aircraft with four 18-cylinder engines was described by Popular Mechanics Magazine in 1943 as resembling a great winged shark:

The civilian aircraft warning observer wore a puzzled frown as he reached for the telephone. “Army Flash!” he barked, “One big four-motored plane bound east. Looks like a shark with a P-38 wing and a triple tail, and is going like sixty! Not on my identification chart!” The observer had spotted the first flight of Lockheed’s big “Constellation” and his description was pretty accurate. The plane’s fuselage is cambered like an airfoil section, giving it a shark-like appearance. Its down-dipping nose caused Lockheed employees to name it unofficially “Old Loop Snoot.”

Lockheed were working on a four-engined pressurised aircraft when TWA requested a 40-passenger transcontinental airliner. Their requirements led to the L-049 Constellation and, at the start of World War II, the TWA aircraft were converted to military transport aircraft. In 1952, Eisenhower fell in love with the “smooth-sailing” of the Constellation and used it for his campaign and presidential travel. A year later, the aircraft’s call sign was officially changed to Air Force One, the first aircraft to ever use that call-sign. Its cabin, with a desk and long sofa-beds, became the design template for all future Air Force One interiors.

This is N548GF when it was flown in to Chino Airport in 2012 for display at the Yanks Air Museum:

But today I’m interested in N119A, a Lockheed L-749A Constellation that landed in a cornfield.

On the 19th of July in 1951 at 14:15, Eastern Airlines flight 601 departed Newark, NJ for a scheduled flight to Miami. It was overhead Philadelphia at the cruising altitude of 18,000 feet when the flight encountered turbulence.

For the next 25 to 30 minutes violent turbulence accompanied by intermittent periods of hail was encountered. The flight continued past Philadelphia for a few minutes toward Dover and then made a turn to the west in an attempt to avoid as much of the storm area as possible. The flight broke out in a clear area at about 15:17. The flight was able to continue VFR and descended to 8,000 feet. A second squall was encountered in the vicinity of Lynchburg at 15:50. The aircraft was slowed to 185 mph IAS, light turbulence and buffeting were experienced.

Although they were now clear of the storm, the buffeting became so severe that the flight crew was concerned that the aircraft was going to break up. They reduced the airspeed again and then the Captain declared an emergency as the aircraft descended. The Captain must have known the area, because he recognised Curles Neck Farm, a plantation in Henrico County, Virginia. He selected the largest field and flew straight in with flaps up and the landing gear retracted: He didn’t dare change the flight configuration as he wasn’t sure what was causing the severe buffeting.

The First Officer and the flight engineer turned off everything as the nose of the aircraft touched the highest corn in the field. The right wing struck a power line pole at the edge of the corn field as the Connie flew under the wires. They then tore down a fence as the aircraft touched down. They skidded 1,100 feet through the field and through another fence and finally came to rest in a pasture. 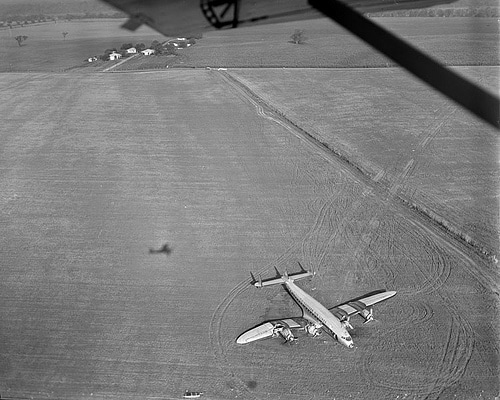 There, they discovered that an access door had opened during the flight through the storm and was the cause of the violent buffeting.

Amazingly, the aircraft was fully repaired and put back into service with no ill effects. Sadly, a few years later it crashed after take-off from New York-Idlewild with 22 passengers on board. The Captain of that flight took off into drifting fog and lost perspective. The aircraft descended into the ground, killing everyone on board. The Lockheed L-794A Constellation was written off. The photographs were taken by Adolph Rice who opened a commercial photography studio in Richmond in 1949. He and his son did commercial work ranging from studio portrait photography to aerial landscape shots. The studio closed down in 1961 and over 16,000 negatives were donated to the Library of Virginia. You can see highlights on Flickr: Adolph B. Rice Studio Collection and the full collection is searchable on the Library of Virginia’s website.