Today is the 99th anniversary of Estonian independence. Sadly, that doesn’t mean 99 years of independence. The auspicious date seems like a good opportunity for a historical post covering the most famous aviation incident in Estonian territory: when the Finnish passenger plane Kaleva was shot down by Soviet bombers as it was departing Tallinn.

Kaleva was a Junkers Ju-52/3m with registration OH-ALL operated by Aero OY. 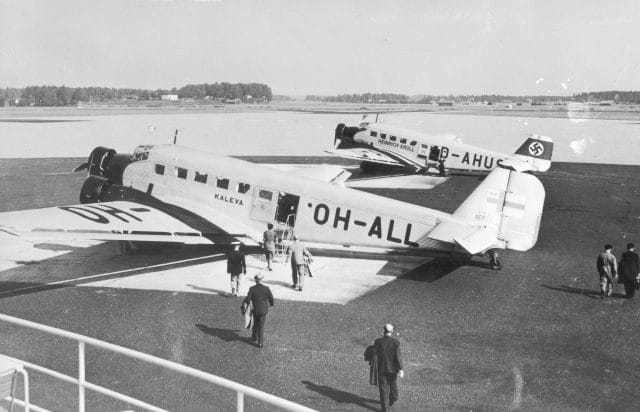 The Junkers Ju-52 is a German tri-motor transport aircraft. It was originally designed with a single engine and was known for its corrugated aluminium alloy (duralumin) skin, making for an uncommonly strong structure. It had a double wing, as the flap ran along the entire trailing edge of each wing panel.

The initial prototypes showed that the single-engined Ju-52 was hopelessly underpowered. The fix? Add more engines. The Ju-52/3m was a modified Ju-52 with two wing-mounted engines to support the the engine at the nose. In the 1930s and 40s, the aircraft saw both civilian and military service and was popular with political figures of the time. Hitler used a Deusche Lufthansa Ju-52 for his campaign travel in the 1932 German election and Chiang Kai-sheik used one for his personal transport.

Aero OY was a Finnish airline founded in 1923 by Bruno Lucander, who had previously run the Finnish operations of the Estonian airline Aeronautics. The first flight was from Helsinki to Tallinn in 1924.  Lucander made a deal with Junkers Flugzeugwerke AG that they would provide the aircraft and technical support needed in exchange for 50% ownership of Aero-OY.

Aero OY received its first Junkers Ju-52/3m in 1932. The 14-seater passenger plane was used to provide a regular service around Europe…as long as there was water nearby. The aircraft was on floats and only flew in the summer months. Soon, however, it was fitted with wheels in order to offer a service between Helsinki and Stockholm. Over the next ten years, Aero-OY took on a further four Ju-52/3M aircraft.

However, air raids on Helsinki made operations difficult during World War II and half the fleet was requisitioned by the Finnish Air Force. In 1939, the Soviet Union invaded Finland. During the Winter War of 1939 and 1940, 50% of the airline’s passengers were children who were being evacuated to Sweden.

In March 1940, the Finns negotiated an armistice with the Soviet Union by agreeing to cede 11% of its border territories. A few weeks later, Aero OY resumed flights accross the Gulf of Finland to Tallinn.

Soviet troops had been based in Estonia for around eight months, since the signing of the Molotov–Ribbentrop Pact.

The Nazi–Soviet Pact was a commitment that neither government would ally itself or aid an enemy of the other party. The treaty included a secret protocol which divided the territories of Poland, Lithuania, Latvia, Estonia, Finland and Romania into German and Soviet “sphere’s of influence”. (The Soviet government denied this secret protocol until 1989, when it was finally acknowledged and denounced. Since then, however, Putin has defended the pact as necessary, blaming Britain and France for allowing Hitler’s expansion into Europe.)

Meanwhile, in 1940 the Soviet military had received instructions to isolate Estonia in an unofficial blockade, so that Estonian ships and aircraft could not leave the country, including preventing aircraft departing over the Gulf of Finland to Finland – the standard route from Tallinn. The Soviet Navy’s Baltic Fleet moved into position on the 11th of June.

On the 14th of June, the Junkers 52/3m known as Kaleva flew from Helsinki to Tallinn.

In Tallinn, the aircraft picked up seven passengers bound for Helsinki: a Finnish-born Estonian woman, two German businessmen, two French embassy couriers, one Swede and an American foreign service courier who had flown in from Helsinki that day and was returning with three diplomatic pouches. The aircraft carried over 120 kilograms of diplomatic mail – it’s been said that the Estonian woman was the only “real” passenger on the flight.

The aircraft departed at 14:54. The flight crew spoke to Tallinn and then at 15:05 contacted Helsinki, who acknowledged them on frequency.

At 15:06, Helsinki attempted to contact the aircraft again but received no response.

A group of three Estonian fishing boats saw the aircraft in the sky, along with two Soviet aircraft. They were Ilyushin DB-3, a twin-engine, low-wing, long-range Soviet bomber. The DB stands for Dalniy Bombardirovschik.

The DB-3 was not a simple or easy aircraft to manufacture as Ilyushin had pushed the limits of the available construction technology to make it as light as possible. For example, the spar in each wing panel had four parts which had to be riveted together and there were numerous welds that each had to be inspected by an X-ray machine, with many failures. In addition the internal riveting of small-diameter tubing was also a difficult and time-consuming process.

As the Estonian fishermen watched, the two Soviet bombers opened fire on Kaleva with their machine guns.
The passenger plane faltered and then flamed up before crashing into the water a few kilometres northeast of Keri Lighthouse.

A more dramatic version of the story is on the Historic Wings website, although I’m not sure what their source is; the detail isn’t mentioned in the Soviet reports.

The two Ilyushin DB-3T bombers, even if they were not proper pursuit planes, were fast and well-armed. Machine guns bristled from the nose and sides. The Soviet crews proceeded with deadly efficiency. Once alongside the Kaleva, they opened fire and raked the plane with extensive fire. Just two or three kilometers northeast of the Keri lighthouse, the Kaleva exploded and crashed into the water at 2:05 pm on June 14, 1940. Everyone on board was killed.

The fishermen rushed to the scene and found flotsom and at least one of the diplomatic pouches floating at the oil slick but no sign of any survivors.

A submarine surfaced next to the wreckage. This was Shch-301, a Soviet submarine in the Baltic Fleet. 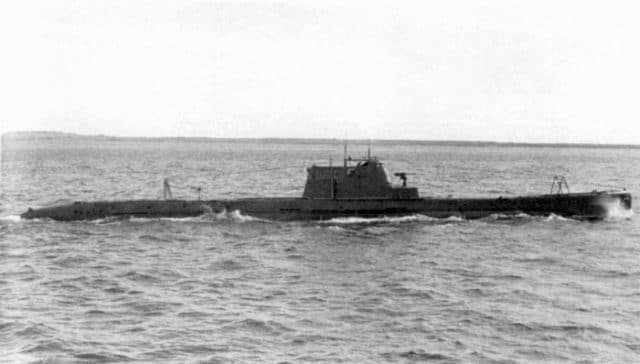 This is the 14th of June 1940 and the submarine was active. The commander of the Shch-301 wrote a report, which was released from the Russian State Naval Archives in the 1980s. They saw a Finnish aircraft en route from Tallinn towards Helsinki, which was being chased by two Soviet high-speed bombers. He reported that the aircraft caught fire and fell into the sea at a location about 9 km (5 miles) from the submarine. The submarine changed course to the crash site, arriving 40 minutes later. They discovered the Estonian fishing boats already on the scene. The fishermen were searched and the submarine crew confiscated all valuables found on the fisherman and in the sea.

Meanwhile, Helsinki had never had a response from Kaleva and alerted the military. A Finnish fighter plane was sent to the approximate location where the aircraft had been. It reported that about six km north of Keri Lighthouse, there was an oil slick and a submarine. The Finnish fighter circled the site three times and then returned to Helsinki.

The submarine remained on the site for a further ten minutes, recovering about 100 kg of diplomatic mail and quite a bit of hard currency of various nationalities. They rendevoused with the patrol boat Sneg who took the recovered items to Kronstadt, Saint Petersburg’s main seaport.

Both the Estonians and the Finns launched investigations, which ground to a halt two days later.

On the 16th of June the Soviets, accusing Estonia of military collaboration against the Soviet Union, made their move. With the country blockaded and 25,000 Soviet soldiers in the country, they invaded Estonia. Lithuania had been taken the day before and Latvia was taken that same day. The so-called Baltic countries were now occupied by the Soviets.

It seems likely shooting down Kaleva was related to the preparations for the invasion and occupation of Estonia. However, it’s not clear whether the Soviets intentionally took out the aircraft in order to prevent the diplomatic mail from leaving Estonia or that the bombers became over-excited and shot down the civilian craft without direct orders. Based on later actions by the Soviet military, it could also have been a simple show of force, looking to provoke a reaction directly before the occupation of Estonia.

Under the circumstances, they were never held to task.

On the 17th of June, the day after the Soviets occupied Estonia, the Finnish commission investigating the crash released a report on the loss of Kaleva. The report stated simply that “the explosion was caused by an external factor”. The wreckage and the bodies of the victims were never recovered.

Aero OY painted the Junkers Ju-52m/3 remaining in service in neutral markings with FINNLAND in large letters over its fuselage and Finnish national flags on her wings, in the hopes that Soviet and German aircraft would recognise it as a civilian aircraft.

Estonia regained its independence on the 20th of August 1991.