Everyone is talking about the Spitfires to be excavated in Myanmar. It isn’t clear how many Spitfires will be recovered. David J. Cundall, who led the search, announced that he’d discovered 20 aircraft but since then his partner company has cited at least 60 and a Myanma geologist has estimated 140 Spitfires in various locations around the country.

These Spitfires were crated for assembly on location but, after the Japanese surrendered, they weren’t required. The US army took the role of burying the crates, in order to keep them from falling into enemy hands.

Half the aircraft will go to the government of Myanmar, with one extra as a museum display. David Cundall will get 30% and his local partner company, Shwe Taung Pa, 20%. Cundall invested 16 years and over £130,000 to find the planes.

I have just a twinge of sympathy for those people who own Spitfires, their expensive investment has just reduced dramatically in value, whether it is 20 or 140 Spitfires that have been discovered.

But that’s nothing compared to my excitement at the find and – if I’m honest – the quiet hope that just maybe I’ll be able to afford to fly one of these beauties, if only for a day. Flying into each of the British Islands is still my life-goal – but doing it in a Spitfire? That would be a dream come true.

And then I indulged my fantasies today by reading about Spitfire history and I was quite surprised by some of the detail that I never knew.

Here’s the most interesting titbits that I discovered…

The Spitfire was named by Sir Robert McLean, after the nickname he bestowed on his daughter, Annie Penrose.

The Air Ministry agreed to adopt the name chosen by Sir Robert McLean. Sir Robert had demanded that the name of the company’s new fighter should suggest something venomous, and because of the sibilant it had to begin with the letter ‘S’. His choice was Spitfire.

R.J. Mitchell who designed the Spitfire apparently hated the name.

Delays to Spitfire production meant it did not make a major contribution to the war until 1941. The aircraft was not key to the victory in the Battle of Britain.

British wartime propaganda – epitomised by the 1942 feature film ‘The First of the Few’ – purposely exaggerated the Spitfire’s contribution to the Battle of Britain. In the film, R. J. Mitchell is portrayed as a lone visionary doggedly pursuing his quest to build the fighter needed to protect Britain in the forthcoming war. The aesthetic appeal of the Spitfire, and its distinctive wing shape, ensured that it rapidly became a visual icon of Britain’s will to defend itself. So effective was this wartime propaganda that even today most people think of the Spitfire as the key to wining the battle. In fact, the Spitfire’s main contribution to the war came from 1941 onwards, over France, Malta and North Africa.

Fast and maneuverable, pilots universally considered the early marks of Spitfire to be a delight to fly, but judged them slightly inferior to the Hurricane as a gun platform. The more ‘flighty’ Spitfire required more effort to keep the guns on target. While its aerodynamics gave it a performance to match or better any other fighter of the time, the early difficulties in getting it into mass production delayed its delivery to fighter squadrons, and so prevented it from paying a greater part in the Battle 0f Britain. 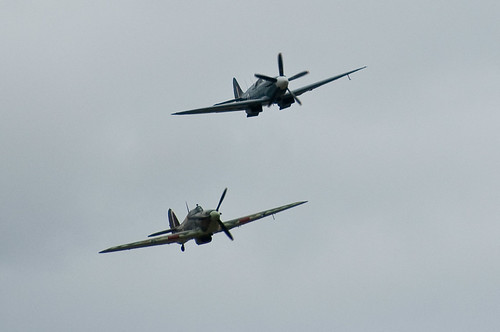 There’s an entire website dedicated to sharing sound recordings of classic aircraft, including the Spitfire.

This is my virtual museum of aircraft sounds I have recorded at various airshows and events in the UK during the past few years. All my recordings are of the highest quality I can manage with the equipement available. From a typical show of 3 or 4 hours, I usually expect half an hour of usuable recordings due to commentators, spectators and incorrect placement of recording equipment. I classify all these recordings as field recordings as none of them are staged or processed after the recording. 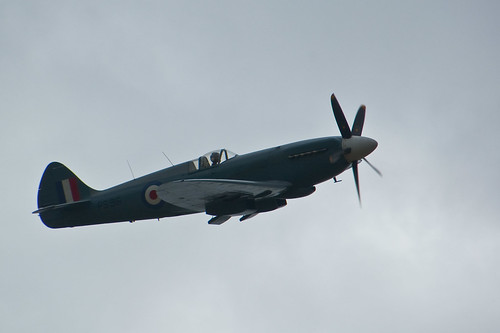 Spitfires were used on both sides of the Arab-Israeli War.

The Egyptian Air Force had over 30 Spitfires which ended up head-to-head with Israeli Spitfires in the First Arab-Israeli war in 1948.

The IAF managed to build one Spitfire from scrap parts left behind by the RAF and they also acquired a number of ex-RAF Spitfire LF9s from Czechoslovakia. The Czech Spitfires had originally been supplied by Britain to form the nucleus of the new Czechoslovak Air Force. But when Czechoslovakia came under Soviet domination, they came under pressure to dispose of the aircraft and replace them with Russian aircraft; eventually a total of 76 Spitfires would be sold to Israel by Czechoslovakia. These Spitfires, along with the Avia S-199s, formed 101 Sqn of the IAF and, together with a steady influx of experienced foreign pilots, gradually increased the IAF’s capability.

However, the REAF were also flying Spitfire LF9s with similar markings to the IAF LF9s and RAF Spitfire FR18s and the confusion this caused was almost certainly the primary reason for the second incident between the IAF and RAF. 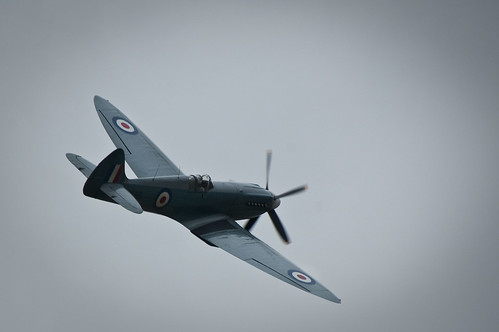 The Spitfire Women, that is, the women of the RAF Air Transport Auxilliary, flew all types of aircraft.

The ATA made tough demands because unlike RAF pilots, who flew only one type of aircraft, ATA personnel would fly several different types – among them Tiger Moths, Messengers, Dakotas, Oxfords, Wellingtons, and, of course Spitfires – sometimes in the space of one day.

The planes all had different cockpit layouts and controls, and the women had only a manual for basic flying information, and they often flew in extremely challenging weather. But they took it in their stride, as Molly Rose, who had gone straight from her finishing school in Paris to working as an engineer in her father’s aircraft factory, drily attested.

And I love this video of ATA ferry pilot Molly Rose who describes the Spitfire as a woman’s aeroplane:

And then there’s this interview of ATA Ferry pilot Margaret Frost about being a passenger.

BBC – BBC TV blog: Spitfire Women: Margaret Frost on her role in the Battle of Britain

When you go near planes now do you get those memories of joy of being up in the air again?

I don’t, I’m afraid. I don’t really want to be flown – it’s a bit like being driven, you know. I remember, I hadn’t been in airliners very much, and we were coming down from Prestwick. I was sitting there and we were coming into Heathrow. There wasn’t much wind and the pilot was trying to get the speed down a bit, and my right arm shot forward, to the amazement of the passenger next to me.

Well, he was a bit slow in getting the throttle open a bit and you get what is called an air pocket, but it isn’t really, it’s because you’ve lost speed, you know. I anticipated it automatically.

And with that, I’m off to have a well-deserved drink. Cheers! 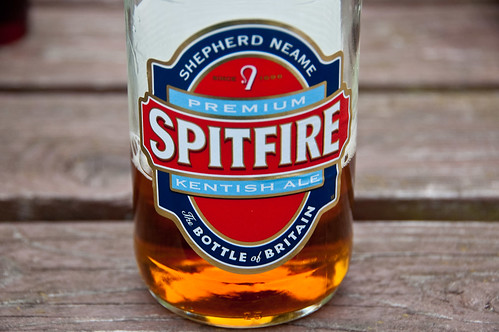