Bird strikes are loosely defined as a collision between an airborne animal and a human-made vehicle. The animal in question is usually a bird but can also be a bat (and in one bizarre incident, a fish). Annual damages caused by bird strikes are estimated at US$1.2 billion for commercial aircraft worldwide.

Initial aviators had no idea that birds would become such a danger to aircraft. Wilbur Wright observed birds in order to design a control system when he first became interested in mechanical aeronautical experiments. He noticed that birds changed the angle of the ends of their wings to make their bodies roll right or left. Wilbur concluded that their flying machine should bank or lean into the turn just like a bird and that this would also enable recovery in gusty winds. This was a major breakthrough for aviation, where the idea of deliberately leaning or rolling seemed undesirable, if they thought about it at all.

Meanwhile, Orville goes down in history as the first known bird strike to a powered aircraft. It was the 7th of September in 1908. According to the Wright Brother’s diaries, Orville flew 4,751 metres (15,587 feet) in four minutes and 45 seconds as four complete circles. He passed over the fence in Beard’s cornfield twice and then chased a flock of birds for two rounds. He killed one, which landed on the flying machine but fell off when Orville was swinging a sharp curve.

The first bird strike fatal to humans was four years later, in 1912 at Long Beach, California, killing the pilot.

The Wright Brothers set up a commercial aviation business called the Wright Company in Dayton, Ohio at the end of 1909. The Wright Company had no interest in innovation. believing there was more money to be made in obtaining royalties from competing manufacturers or patent infringers.

John Rodgers was a Navy man who studied flying at the Wright Company in 1911 and became the second American naval officer to fly for the United States Army.

John’s cousin Calbraith Perry Rodgers went to visit John at the flying school in March 1911. Cal was immediately fascinated and signed up for flying lessons himself. He received an hour and a half of flying lesson from Orville Wright and on the 7th of August that same year, he passed his official flying examination at Huffman Prairie Flying Field, the same airfield where the Wright brothers had tested their aircraft since 1904.

The Fédération Aéronautique Internationale was founded at a conference in Paris in October, 1905 as an association to regulate the sport of flying.

From its inception, the FAI defined its principal aims as being to”methodically catalogue the best performances achieved, so that they be known to everybody; to identify their distinguishing features so as to permit comparisons to be made; and to verify evidence and thus ensure that record-holders have undisputed claims to their titles.” The statutes also specified that each body holding sporting powers (i.e. the national members of FAI) should retain full and autonomous control over its own affairs.

It is now is the world governing body for air sports, aeronautics and astronautics world records.

In 1911, Cal Rodgers was the 49th aviator licensed to fly by the Fédération Aéronautique Internationale.

He bought a new Flier, the first Wright machine ever sold to a private buyer, and set off to cross the United States in it. William Randolph Hearst offered a $50,000 reward to the first pilot to fly cross-country across the US in 30 days or less and with his new plane and 90 minutes flying instruction, Cal was up for the challenge.

Cal also created the precursor to banner advertising, arranging with a Chicago businessman, J. Ogden Armour, to sponsor the flight. In return for Armour’s sponsorship, Cal named the aircraft Vin Fiz, after Armour’s new soft drink, and spelled it out on the rudders and the undersides of the wings.

He had his first run in with birds on the second day of his cross country flight, when he clipped a tree with a wheel and crashed into a chicken shed. The flight was beset with difficulties and landed 75 times en route, 16 of which were crashes. The Wright brothers mechanic, Charlie Taylor, followed behind by train and repaired the aircraft so many times, almost none of the original build remained by the time they arrived in California.

Cal Rodgers completed the first transcontinental flight across the US but did not make it within the 30 days required to collect the Hearst reward. Nevertheless, he was cheered as a hero when he landed on the beach after travelling 6,400 kilometres (4,000 miles) from coast to coast. The actual flying time was just under 84 hours.

The following year, Cal was still in California and spent a week doing daily flights at Long Beach. He often took passengers with him. One of those flights went terribly wrong.

Today he started from his usual place and soared out over the ocean, crossing the pier, and then returning, dipped close to a roller coaster in a beach amusement park. “Seeing a flock of gulls disporting themselves among a great shoal of sardines, just over the breakers, Rodgers again turned and dived down into the, scattering the seafowl in all directions. “Highly elated with the outcome of his dive, Rodgers then flew farther out to sea, all the time gradually rising until he had reached a height of about 200 feet. Making a short steep turn, he started at full speed for a pier, then suddenly dipped his planes and his machine began a frightful (rapid?) descent. Rodgers was seen by hundreds of persons on the pier to relax his hold on the levers and then, seemingly realizing that he was in danger, he made strenuous efforts to pull the nose of his machine into a level position.

When he’d flown into the flock of birds, he struck a gull. It jammed the rudder control, which he was unable to clear. The aircraft crashed into the surf just a few hundred feet where he’d finished his transcontinental flight with Vin Fiz.

Two lifeguards were the first to the scene and found Cal hanging over the wing. They lifted him to carry him to the hospital but he died on the way there. Later examination showed that his neck, jawbone and back were broken. 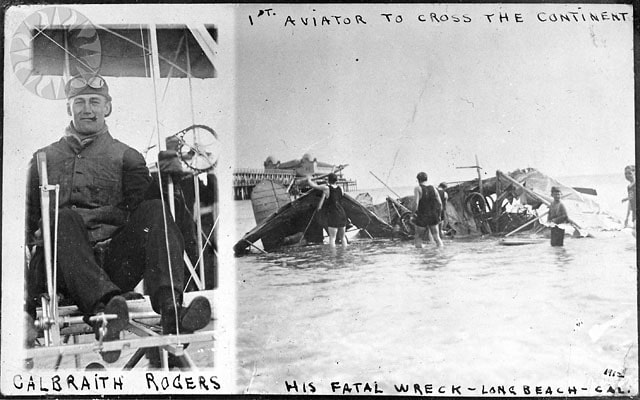 Cal Rodgers was the 127th aeroplane fatality since aviation had begun and the 22nd American aviator to be killed. He was just 33.