Vincent “Enzo” Romano is a historian and researcher who has created the “most complete Italian private digital archive related to American History, from the end of the 19th century to 1970.” Included in his collection is a stunning video from March 1945 in which Captain Bernard “Barney” McCaskill Jr ditches his B-29, the Hopefull Devil, in the Pacific near Pagan Island. Over 300 B-29 bombers departed for Japan that morning on a mission to bomb Tokyo.

To complete the mission, the crews had to fly 1,500 miles to get to Japan, make their bombing runs, and then fly the 1,500 miles back to their home base–fifteen stressful hours of flying over water.

In order to increase bomb capacity, fuel loads were kept to a minimum. Consequently, planes damaged in combat, suffering from mechanical malfunctions, or thrown off course often could not make it back to base.

Many were lost without leaving a trace; some were seen to crash after crewmen had bailed out, and others were deliberately put down at sea, in a procedure known to airmen as “ditching.”

Here’s Pagan Island: not an area where you’d want to be flying without enough fuel to make it home: 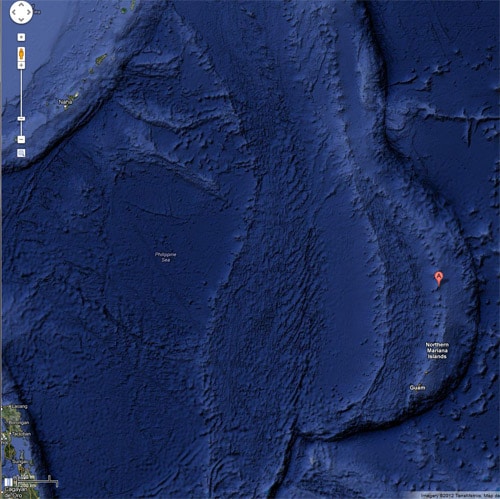 Realizing they did not have enough fuel to reach the home base on Tinian Island, the “Hopefull-Devil” radioed a call for help.

The distress call was picked up by the seaplane tender USS Bering Strait (AVP-34) on lifeguard duty approximately 20 miles north of Pagan Island. The ship vectored the “Hopefull-Devil” to its position and Captain McCaskill ditched alongside at 12:38PM.

A cameraman on the USS Bering Strait filmed the ditching and subsequent rescue. Captain McCaskill was convalescing in the military hospital from his injuries, which included a broken back, when the cameraman visited him to give him two unedited copies of the 16mm film. As Captain McCaskill didn’t have a 16mm projector, he kept the film cannisters in his closet for safe keeping. It was over 50 years later when his son converted the film in order to view it.

In a newspaper article reporting on the incident Capt. McCaskill explains what happened while the USS Bering Strait launched its whaleboat to pick up the crewmen in the water:
“I was pushing down on the rudder pedals for the landing, and that and handling the wheel made my body pretty stiff for the impact. That’s why my back got broken.

“I couldn’t stand up afterwards and I looked up and the co-pilot [Col. Macomber who was along for a guest rid]) was already getting out. The water started rushing in about then. It washed me back to my seat.”

But Capt. McCaskill managed to grab hold of the window and pull himself outside. “I had a canteen on my belt. It was knocked off. I was jerking so hard to get myself out.”

Outside Capt. McCaskill said he counted heads and saw all were there. But he found that the two gunners back at the tail were having a ‘rough time’. They couldn’t swim. Capt. McCaskill inflated the Mae West of one of the boys so he was all right. The other [Corporal Rivas] was holding on to the plane and was being slapped back into the water each time the plane was caught by a wave.

“I told him to turn loose the airplane. He didn’t want to but did. It was at the wrong moment, though. For just then a big wave caught him and he went down.”

So Capt. McCaskill slid out of his own Mae West and dove down after the young gunner. Under the water he inflated the gunner’s Mae West and that was what brought them up.

The rescue vessel had a life raft near them and Capt. McCaskill got the boy on it. [Col. Macomber] had to swim in front of the raft to pull it and Capt. McCaskill was behind it, pushing to keep it clear of the plane which was still being tossed about in the choppy sea.

The crewmen on board the “Hopefull-Devil” were saved, with only two significant injuries. Capt. McCaskill suffered a broken back from the impact of the ditching, and Corporal Binger had a severely gashed jaw. Both received the Purple Heart.

The Romano archives includes a stunning amount of excellent material including a whole selection of WW2 footage which has been uploaded to YouTube:

If you have an afternoon to spare,I absolutely recommend visiting to see the incredible historical footage that the Romano archives is making available for viewing.

PS: If you found this post interesting, I think you would enjoy the following: