I found a lot of interesting articles and clips this week in the news – too many to pick a subject. So for this week, have a news round-up with plenty of links for you to find out more.

The accident report has been released for the incident I wrote up in January:
Ditching in the Irish Sea.

Approximately 38 nm south-east of Ronaldsway, at FL 080, the pilot identified a “runaway” (overspeed) of the right engine. She shut down the engine and commenced a diversion to Blackpool Airport. Six minutes into the diversion the left engine also lost power. Despite conducting relevant cockpit procedures the pilot was unable to restore power. Unable to maintain level flight, and having calculated that Blackpool was too far away, she ditched the aircraft and was picked up by a rescue boat from a nearby rig support vessel.

Next, they sieved volcanic ash collected from farmland near Eyjafjallajökull and kept those particles that were 57 micrometres in diameter or less. These are the particles that reached aircraft cruising altitudes, above 9 kilometres, in European skies during the eruption. They then loaded the ash into a sandblaster and fired it at the hot blades.

The red-hot vanes became coated in a glassy film as the ash melted, so much so that a real jet engine would clog up and fail. But when the team dropped the temperature to 720 ºC – a temperature an engine will cool to after failing – the ash began jumping off the vanes until most of it had gone (see video).

The article is pretty silly (“[We] were convinced we were about to die”) but I particularly enjoyed the map showing just how far they had to divert to land safely: 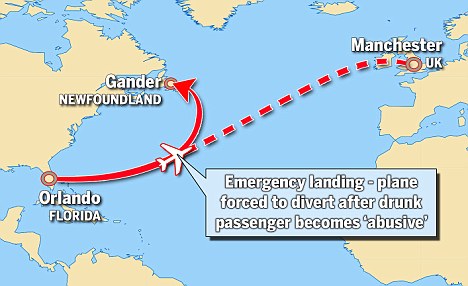 You can see the Great Circle route of today’s flight on FlightAware which takes the flight directly over Gander, making it an obvious place to divert to under the circumstances.

But he was quoted by the Financial Times as telling the conference: “We all know there’s quite a number of elements in the security programme which are completely redundant and they should be sorted out.”

Mr Broughton, who is also chairman of Liverpool FC, added the UK should only agree to security checks that the US requires for passengers on domestic flights.

“America does not do internally a lot of the things they demand that we do,” he said. “We shouldn’t stand for that.”

UTA, which was eventually incorporated into a French aviation firm, had a checkered safety history and was only given permission to commence commercial flights from Beirut after initially failing to meet necessary safety specifications.

Preliminary investigations into the cause of the crash showed that the plane had taken off up to 10 tons overweight, although subsequent crash probes revealed a different problem.

“The direct cause of the accident was not the large amount of excess weight on board, but the distribution of the load,” said France’s Accident Investigations Bureau (BEA) in the months following the crash.

Preliminary information indicates the student pilot, a 60-year-old man, on his second solo flight, had problems in his takeoff and lost control when he landed. His single-engine plane skidded off the runway and landed on two cars parked in the lot of an industrial business.

This is, of course, a somewhat random selection of current affairs which I found interesting. Feel free to add current aviation stories in the comments.