Microsoft Flight Simulator: The Good, The Bad And The Ugly

The original flight simulator took form in 1975 when Bruce Artwick, a software engineer and pilot who was doing a Master’s degree in Electrical Engineering, created 3-D graphics for flight simulation on a PDP 11 as a part of his thesis.

After he graduated, he wrote a program for 6800-based machines to prove that the processor was capable of dynamic 3-D graphics along with a series of articles explaining what he’d done.

A magazine editor contacted Artwick to ask if the program was for sale, explaining that readers were writing in, eager to buy it.

Quick to spot an opportunity, Artwick created a software house and started selling the software by mail, originally releasing versions for the 8080, the Altair 8800, the IMSAI 8080. Within a few years he followed up with a version for the Apple II (and the TRS-80) and, before long, Flight Simulator became the most popular software for Apple.

Artwick then got a call from Microsoft. Microsoft was working with another company that was coming out with a new computer that they predicted would revolutionize the industry, and they wanted to put [Flight Simulator] on it to show off the machine’s graphic capabilities. At the same time, Artwick received a similar call from IBM. He opted to work with Microsoft and the new, revolutionary computer turned out to be the IBM PC.

By today’s standards, it doesn’t use a lot of processing power. In fact, you can play all four of these early versions of Microsoft Flight Simulator for free in your web browser, using the awesome emulator developed by Sebastian Macke and released on github.

The Verge writes that when a Microsoft VP was shown the first demo using the data, a Cessna flying in downtown Seattle, he didn’t understand what he was seeing.

“He just looked at me and said, ‘Why are you showing me a video of Seattle with a plane?’” Neumann (Microsoft’s head of Flight Simulator) says. “And then the plane turned, and we flew over the Microsoft campus where we were sitting at that exact moment. And he’s like, ‘Is this real time? Is this running?’ And I’m like, ‘Yes, it is!’ And we knew then we had something special.”

However, after release, it soon became clear that there were some problems. Big cities with plenty of data looked great but others, reliant on the procedural algorithms, have gone quite disturbingly wrong. One of the most eye-catching is an inexplicable tower in Melbourne:

In Microsoft Flight Simulator a bizarrely eldritch, impossibly narrow skyscraper pierces the skies of Melbourne's North like a suburban Australian version of Half-Life 2's Citadel, and I am -all for it- pic.twitter.com/6AH4xgIAWg

It turns out that on OpenStreetMap, which is one of the sources used to populate Bing Maps, a user listed the building as having 212 floors, when in fact, the building actually only has two floors. Someone has since fixed it but not before the data was exported for use in Bing Maps and thus the error ended up in Microsoft Flight Simulator, where the AI very diligently represented the building as 212 stories high.

Gizmodo contacted the person who entered the bad data in the first place.

A year ago, Wright had to spend time every week putting details into OpenStreetMap for his degree. The task wasn’t assessed and it was, he said, “pretty boring”.

“We had to go in and put data about the suburbs into OSM. It was very monotonous and I made a few mistakes but I was like ‘fuck it, I don’t care,’” he said.

Which to my mind is the perfect summary of the problems with the modern over-reliance on crowd-sourced data.

This prompted many attempts to land on the tower, including this successful one:

There are also textural problems. Reddit user l4adventure posted images of the Pyramid of the Sun in real life compared to in the simulator: 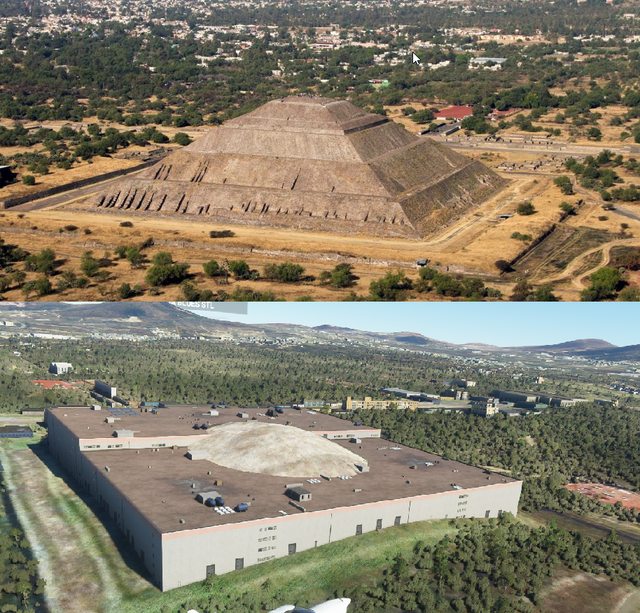 BBC News have done a video of the simulator, including Buckingham Palace turned into a concrete monstrosity:

Research scientist and author Janelle Shane, who wrote a book on AI weirdness (called You Look Like A Thing And I Love You), explains how this happened:

Because a nondescript office building is a reasonable default guess given a square building pad and a many-story height, the AI will tend to populate the planet with them unless specifically told otherwise. The Statue of Liberty, the Taj Mahal, and the Eiffel Tower are all lavishly hand-modeled in 3D. But The Motherland Calls statue of Volgograd is a condo high-rise, Buckingham Palace is an apartment complex, the Leaning Tower of Pisa is a vertical concrete silo, and the Pyramid of the Sun is a nondescript warehouse with a hilarious tiny dome on its roof.

More relevant to our interests, the AI also seems to be interested in creating airliners out of brick … or maybe just converting Dunsfold Aerodrome to aircraft-themed housing? Either way, I’m interested!

A quick look at Dunsfold Aerodrome gives us a hint as to what went wrong:

Finally, there’s the long running joke of flight simulator players hoping to be the most qualified person on a flight with an emergency.

This is such a common theme that I wrote a short story about exactly that which you can read on my Patreon (free, no registration needed): In Command.

However, this video of a landing Microsoft Flight Simulator 2020 shows just why this is unlikely to ever be the case…

Microsoft and Asobo Studios, who developed the simulator and the procedural engine, have been fixing locations and other anomalies as quickly as they’ve been reported.

It has to be said that despite all of this madness, I’ve not heard of anyone asking for a refund.