This week, I want to share with you a collection of close calls (each with a happy ending) collected from around the Internet.

The FAA are investigating this video of a stunt aircraft coming dangerously close to people on the ground. A commenter who claims to have been on site when the video was filmed says that the stunt was planned, briefed and completely safe and that the camera angle makes the aircraft look closer than it is. All I can say is that the person holding the camera didn’t seem briefed, she seemed to be scared out of her wits.

I was a lowly flight instructor in the days after Sept 11, 2001. Flying jobs were next to impossible to find so I was “biding my time” as a flight instructor in Merritt Island, Florida. My flight that fateful day was to do a flight-review with an 80-something year old lady. She was a retired US Navy officer and I’d been told she had a bit of a strong character. Her doctor had told her she shouldn’t be flying any more but she decided to come to our flight school to prove otherwise. I’d never flown with her before but other flight instructors urged me not to sign her logbook ( for a flight review ) if I wasn’t comfortable.

This video of an engine fire after lightning strike is eerie to watch.

A Turkish Airlines flight suffered an engine fire due to lightning strike during its descend to I.zmir Adnan Menderes Airport (LTBJ)

Turkish Airlines flight TK-2348, an Airbus A321-231 registration TC-JRI, landed at LTBJ safely at 22:05 UTC
Passengers exited the plane normally. There were no injuries and no impact on airport operations.

With his £20 million fighter plane hurtling towards the ground, Captain Brian Bews had little time to think. The 36-year-old pilot was forced to choose between battling to save the plane, or bailing to save his life. He chose the latter, launching himself out of the cockpit with the ejector seat and parachuting down to earth – miraculously landing unharmed, as his plane exploded in a mass of flames and black smoke.

These spectacular pictures show just how close Capt Bews, who has clocked 1,400 hours of flying time, came to death. 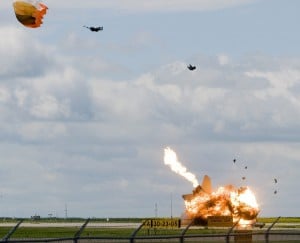 This happened a few years ago but I hadn’t seen the photograghs before. Captain Bews made a full recovery from his injuries.

I found this interesting collection of photos and story was posted onto Reddit.

So, I had an interesting day at work.

There was an 18 knot cross wind when the plane landed at 1am. Pilot said that he stalled a wing, and his wing struck the ground. As soon as he hit, he said he hit full power as quick as he could and pulled up, and looped around for another shot at landing. 2nd times the charm. Pilot did not inform tower of wing strike, just said he missed and looped around for another try. There was FOD all over the runway obviously. Real shady of the PIC to not inform anyone. I was called out at 2am to put the plane in the hangar

Click through to see the photographs of the damage and read the full story. The pilots departed with the fuel leak, hoping to make it from Canada to Mexico. I guess as it hasn’t been in the news yet, they must have made it…

“I was watching him the whole way. The plane crashed into small trees and flipped over. The airplane was badly damaged, but Kirby extracted himself and walked to a clearing. I had immediately called for the rescue helicopter and they were there very quickly. A testament to the readiness of the El Salvadorian military. Kirby is fine with superficial scrapes and bruises.”

The video is in Spanish but gives a good view of the wreckage and the removal of the (remains of the) plane from the crash site.

Meanwhile, I’m still hoping for a happy ending for the Boeing 787 Dreamliner. Any word yet?