Apparently it’s a shame about the plot, however this is some of the most stunning footage I’ve seen in a long time. Eat your heart out, Top Gun.

Chicks away! Chicks away! Baby chickens ‘stowaway’ on cargo flight from Brazil and get a different type of flying lesson from the cockpit | Mail Online There isn’t an oops big enough for this one…

Small aircraft squawks 7500 by mistake and is met by police upon arrival at vny. – NASA ASRS

While flying VFR from sacramento to van nuys I called la center while approximately 50 mi, 315 degrees from van nuys airport. They asked me to contact burbank approach. Burbank assigned me a squawk code. Several mins later the controller asked me my altitude and I responded 7500′. He told me to squawk my altitude. I replied, ‘squawking 7500’, and the controller confirmed my code.

Be sure to read the whole story, what a scene!

Astounding footage of a touchdown in slow motion:

Via r/aviation, Sukhoi SU-35S fighter faces off an Su-27 Flanker, photo by ICEprod: 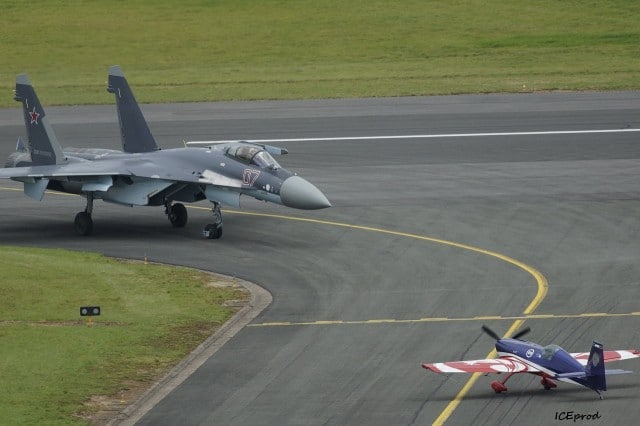 This isn’t new news but I didn’t know the story (thank you to RJ Wade!) : Mehran Karimi Nasseri lived in the departure lounge of Charles De Gaulle Airport Terminal One for eighteen years. He was travelling to the UK as a refugee but his briefcase containing his papers was stolen. He boarded the plane for London but was turned away at immigration and returned to France. His story is fascinating.

On arrival at Charles de Gaulle, he was arrested for attempting to enter the country illegally, having no papers to substantiate his previous predicament. The lost papers also meant the French had no country of origin which they could return him to. This was a pretty pickle with no obvious solution, so the police returned him to the confines of the airport.

Without documentation, Nasseri was unable to fly anywhere, nor was he able to leave the airport to enter France proper for fear of being rearrested for illegal entry. Nasseri had arrived at his own personal hell: Terminal One, Charles de Gaulle Airport.

And that’s it for today but I hope I brought a small smile to your face. I’m away for next week but I have an amazing video and story for you when I get back!