I spent much too much time browsing the web and not enough time writing. The result? A collection of interesting aviation articles and videos for your amusement!

Top tip: play this one in full-screen mode for the full effect.

I never knew wingtips could be so fascinating:

Yoga for jets: why planemakers prefer bent wingtips via reddit.com

There are, so the industry saying goes, only three secrets in the commercial airplane business: the selling price, the production cost and the shape of the wing.

Boeing on Wednesday trumpeted its latest achievement in aerodynamics as it battles Airbus — wingtip to wingtip — for the lion’s share of a $2 trillion market for narrowbody Boeing 737 and Airbus A320 models over the next two decades.

It takes a special kind of geek to get excited by this page:

Whereas the appeal of this one is easy:

Test flight of the last 195th F-22 Raptor fighter on March 14, 2012. The final F-22 Raptor was delivered to the USAF in ceremonies on May 2, 2012 at the Lockheed Martin manufacturing facility in Marietta, Georgia.

As if pilots didn’t have a difficult job already:

North Korea has been busy for the past week, trying to jam the navigation signals going to civilian aircraft over South Korea, according to reports in South Korean media.

I would think the FAA had better things to do with their time:

And finally, well, all I can say is ouch! 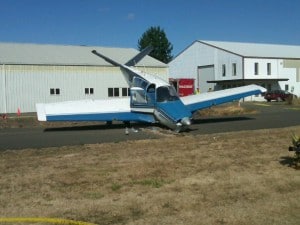 That’s a road that he’s on, not a taxiway. The aircraft somehow left the ramp, went between two hangars with a foot of clearance on each side and wound up bouncing through a drainage ditch. Obviously took out the nose gear and had a propstrike.

7S5 Independence, Oregon, for those wondering.

No, the 5 foot deep drainage ditch behind the airplane is responsible for the nose wheel failure. Not sure how fast he was going, but he cleared it…almost. The aircraft didn’t change direction. It came from directly behind where it’s sitting. To the left, just outside of the frame there is a gap between two hangars that is just wide enough for the plane to get through. The road it’s sitting on is between the ramp and the air park houses.