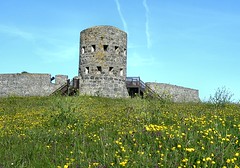 We sat on the terrace of the Chalet, gazing out at the water and Sark in the distance, while Peter and Mary put up with a torrent of questions about the island and the must-see places.

“And while you are exploring the bays, you should go visit the towers, they’ve been put into quite good order, although I still wouldn’t want to be a soldier living in it during a winter gale! Just don’t believe anyone that tells you that the towers are all Martellos. Most of them are not.” Peter gave me a stern look.

“Not a Martello tower,” Peter explained.

It seems that in 1794 during the Napoleonic Wars, the British responded to a plea from Corsica to help them fight off the French. The Royal Navy attacked and captured a large, round tower on Mortella Point but it took two days and they suffered unexpected casualties. When the British left Corsica, they decided to destroy the tower to keep it from being used by the French but even that proved more difficult than expected. The Royal Navy was impressed and made plans of the tower, apparently at this point getting the name wrong. The decision was made to create towers in the same style to defend the English Coast. In the early 1800s a hundred of these towers were built: chunky brick structures that were 30 foot tall and 13 foot thick on the seaward side. The towers became redundant when Napoleon defeated in 1815 and were never used in battle.

“We have 15 towers along the coast,” Peter told me, “but they pre-date the Martello towers, built in 1780. They are smaller and not as strong. Guernsey does have Martello towers: Fort Grey is one, they call it the cup and saucer. I think there are two others. But the locals will tell you they are all Martello towers. They aren’t.”

I nodded, impressed at the pitfalls involved in describing disused fortifications.

Much later, I had forgotten about the conversation when I saw grey brick looming up from a green field covered in buttercups. I realised that I had found one of the towers that Peter had been telling me about. I explored around it and its cannons. I laughed aloud when I found and read the plaque attached to it. The plaque is there to inform visitors that they have reached Tower No. 11, Rousse Tower, and that it is not a Martello tower.