Why do aircraft still have ashtrays in the lavatory? 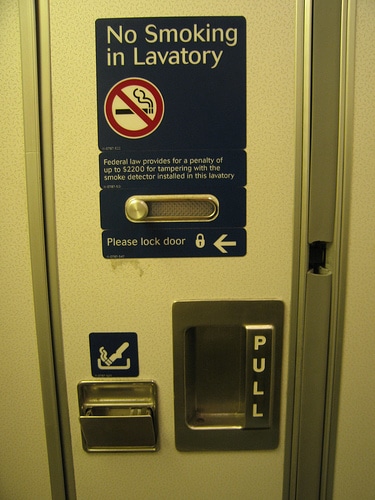 We’ve all seen this in the toilets of commercial aircraft: a large no-smoking sign with a plainly marked ashtray underneath. Obviously airlines who allow in-flight smoking have ashtrays as a part of the standard model. But are there any of those left?

The US banned smoking on domestic flights in 1990 and soon followed up with international flights. The UK does not have a ban on smoking in flight; however British Airways trialled non-smoking flights in 1990* with Virgin and other UK airlines following suit. By 1995, it was rare for a UK airline to allow smoking on board and in 1998, British Airways banned it completely. By 2003, only a very few airlines around the world allowed smoking on international flights.

And yet, even the most modern aircraft have ashtrays built into the toilet door. These ashtrays are accompanied by big placards which announce that it is prohibited to smoke in the lavatories under any and all circumstances – so why have the ashtrays there in the first place?

The FAA and CAA have airworthiness requirements / directives mandating that these ashtrays are in place, along with the placards prohibiting smoking. The airline is required to have ashtrays in the toilets and they must be inspected regularly to ensure they are still working. It is part of the minimum equipment list (MEL) that an aircraft must have onboard, which means if an ashtray breaks or is removed, it must be replaced promptly (3-7 days in the US, 10 days in the UK). Although smoking is not permitted on the flight, if someone does light a cigarette, they must be able to extinguish it safely.

Legally, a plane could be grounded by not complying, as happened to a Canadian airline in February 2011.

The Jazz Air flight from Fredericton to Toronto was scheduled to depart at 14:50 local time when the crew discovered that the ashtray receptacle had been removed. The airline flew the empty plane to Halifax to have a new ashtray installed and then returned to Toronto where the flight departed nine hours late at 23:45.

The reason for this directive is that despite the prohibition, there is always the risk that a passenger will smoke anyway, and hidden away in the lavatory is the only real place someone might hope to get away with it. Surveys have shown that it continues to be a problem, despite years of prohibition and warnings in bold red fonts. When the fire alarm kicks off and the cabin crew start banging on the door, a panicked passenger should not be tempted into shoving the cigarette into the paper towel dispenser.

This may sound far-fetched, but the scenario does not simply occur in the nightmares of airline industry bureaucrats. In 1973, Varig Flight 820 crashed, killing one hundred and twenty three people, with the probable cause of a cigarette. 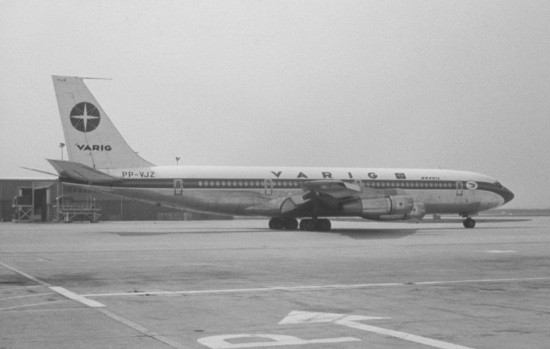 The scheduled flight from Rio de Janeiro for Paris-Orly was on approach for runway 26 when the flight crew contacted Orly to state they had a problem with fire on board and needed an emergency descent. The fire was at the rear of the plane and the cabin was filling with smoke. At 13:59 the flight was given clearance to descend to 3,000 feet for runway 07, to allow the aircraft to make a straight-in landing.

Meanwhile, smoke was entering the cockpit and the flight crew, who were wearing oxygen masks, were struggling to read the instruments. At 14:03, the captain attempted an emergency landing 5 kilometres short of the runway.

The aircraft landed on a field, where both main gears collapsed and the engines were torn off. By the time the firemen arrived, the fire had burned through the roof. Ten occupants evacuated through the roof. Firemen rescued four unconscious occupants but only one survived. One hundred and twenty three were killed from the inhalation of the smoke, most of them dead before the plane even landed.

The fire started in the washbasin unit of the aft right toilet. The FAA responded directly to this accident with the requirement to install placards and ashtrays in all aircraft.

So when you see that no smoking sign next to the ashtray, you’ll know the reason why. It’s not meant to be a temptation to break the rules and light a cigarette, simply a safeguard in case somebody does it anyway.

Leave a Reply to Peter Dudley