Thermal Image of 757 Landing at Gatwick

This thermal imaging footage of a Boeing 757 coming into land at Gatwick airport dates from 2013 but I first saw it today on r/aviation and found myself mesmerised as I watched the changes in the infra-red spectrum.

I found the comments on the post pretty interesting, too. The bulk of the discussion is about the rear wheels, which seem to “light up” before the aircraft touched down. This could be residual heat from the previous sector but the way they suddenly glow as the aircraft comes over the runway, it seems more likely to be infra-red reflections coming off the runway. Either way, I thought the sudden blaze of heat on touch down was fun to watch. 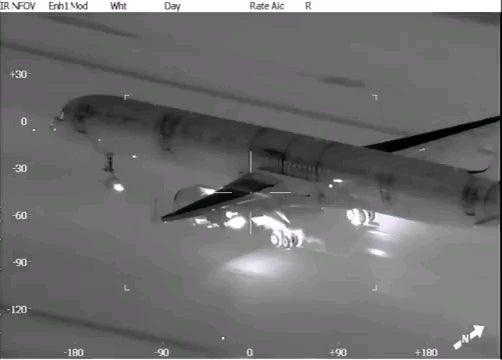 A commenter going by killroy200 pointed out some other interesting aspects:

* You can see how the throttle is adjusted during landing in the way the heat plumes change size every now and then.

* You can clearly see the more structurally significant ribs at the wings, and the framing around the doors

* You can see how the heat from the engines reflects off the rear gear, heating them up even before landing

I’m sure there’s more that could be called out on this video so feel free to chime in in the comments.