The Legend of the Ghost of Kyiv

On the 25th of February 2022, Plane & Pilot magazine shared a video of the “Ghost of Kyiv” overflying Kyiv in a Ukrainian MiG-29.

An unnamed Ukrainian fighter pilot shot down six invading Russian planes on Thursday, becoming an ace in a matter of hours. The pilot’s identity is being protected, for fear of reprisals should they fall into Russian hands. Sources say that they have shot down two Sukhoi Su-35s, two Sukhoi Su-25s, a Sukhoi Su-27 and an enemy МіG-29.

Plane & Pilot have since removed that article from their site, but you can still see the original article on the Web Archive. The video in question is on Twitter:

Ukrainian pilot who is 6-0 shoots down a Russian Su-35 with his Mig-29. He’s been nicknamed the ghost of Kyiv, and is the first pilot since WW2 to achieve ace status! pic.twitter.com/WsoadzLrdQ

The video was debunked as a fake within hours. The footage did not show a fighter jet flying over the city of Kyiv on the first day of the war; it is a clip from a video game called Digital Combat Simulator.

This is not the first time video game footage has been mistaken for wartime footage. The most well-known example was in 2011, when a British ITV documentary claimed to have footage from 1998 showing the IRA shooting down a British helicopter; in fact, it was an animation taken from the military simulation game ARMA 2.

As the old proverb goes: a lie can travel around the world while the truth is lacing up its boots.

Eager for news of the war and unwilling to do even the most basic fact-checking, civilians and journalists alike continued to share the Digital Combat Simulator video even after it had been thoroughly exposed as a fake.

This may have partially been because the numbers quoted in the original text were accurate. The Ukrainian military confirmed that five Russian planes and a Russian helicopter were shot down over Kyiv during the first day of Russia’s invasion. In addition, several verified videos of aircraft being shot down were released.

The Ukrainian Interior Ministry says Kyiv's air defenses have downed a Russian aircraft. Here's a collection of videos showing a massive explosion with debris raining over apartment high-rises on the left bank of the Dnieper River. pic.twitter.com/Ub3LdzdTh0

Ukrainian forces destroyed a total of seven aircraft and six helicopters in the first twenty-four hours after Russia’s invasion. However, notably, there was no mention of the claim that over five aircraft had been shot down by a single pilot, the so-called Ghost of Kyiv.

On the 27th of February, the Ukrainian Security Service posted a photo on Telegram which added fuel to the fire. 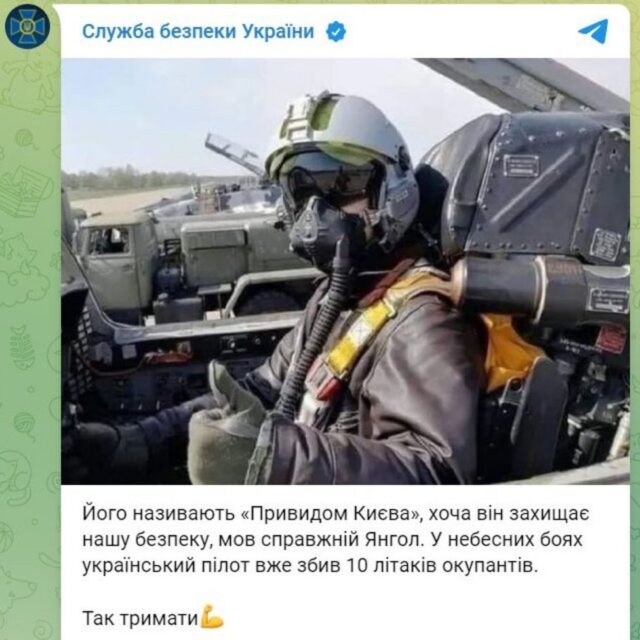 The text accompanying the photograph calls the Ghost of Kyiv an angel for downing ten Russian planes. No further details were given; however, many considered this to be confirmation that the Ghost of Kyiv was an ace fighter pilot flying in the Ukrainian Air Force, his details kept secret for military reasons.

On the 28th of February, President Zelensky honoured the pilots who had lost their lives on the first day of the war. He spoke specifically of a famous fighter pilot, Col. Oleksandr Oksanchenko, known as “Grey Wolf”.

In a heartwarming biography in Task and Purpose, fellow airmen explain that Oksanchenko’s nickname came from a Soviet-era cartoon based on Ukrainian folklore. The folk tale tells of an aging wolf who makes friends with his former enemy, a sheepdog who has been told he is too old to keep guarding his farmer’s flock. The grey wolf of the story is depicted as experienced and witty as well as prone to drinking too much vodka.

Oksanchenko came into the public eye as a display pilot for the Ukrainian Air Force, winning awards in air shows around the world, including “Best Overall Flying Demonstration” at the Royal International Air Tattoo in the UK in 2017 in his Su-27. He retired in 2018 at age 50 but took to the skies again to fight for his country.

This led to a new wave of rumours that Oksanchenko was the Ghost of Kyiv, especially after iOrbitnews reported that:

Ukrainian stunt pilot Colonel Oleksandr ‘Grey Wolf’ Oksanchenko, who is known as the ‘Ghost of Kyiv’ for having downed seven Russian fighter jets, was shot down over the capital Kyiv on Friday night.

Ukrainian officials declined to confirm whether Oksanchenko had become a fighter ace (shooting down five or more enemy aircraft during aerial combat) in his last flights or whether he was ever known as the Ghost of Kyiv.

But then, two weeks later, the General Staff of Ukraine posted an image with a watermark of Ghost of Kyiv with the caption: “Hello, occupier, I’m coming for your soul.”

Again, the photo showed an unnamed pilot who could not be recognised under his oxygen mask and dark visor. This photograph was taken as evidence that Oksanchenko was not the Ghost of Kyiv and so speculation began anew as to who this fighter ace could be.

This article was the first claim that Tarabalka had been confirmed as the Ghost of Kyiv.

Ukrainians on social media have hailed the pilot as a “hero” and a “guardian angel” although his identity was kept secret. This led to speculation that the story was a myth, designed to boost morale as the country was being bombarded by Russian bombs and missiles. However, Ukrainian sources remained adamant he was real.

The “Ukrainian sources” remain unnamed although every other reference in the article is sourced, including Tarabalka’s father who was unable to confirm the secret identity of his son.

He said: “We know he was flying on a mission. And he completed the mission, his task. Then he didn’t return. That’s all the information we have, really.”

At the same time, military experts had already been dubious of a Ukrainian fighter pilot downing seven aircraft while outnumbered in the skies above Kyiv. Forty kills were beyond what even the most amazing fighter pilot could achieve under those circumstances.

The following day a Ukrainian Air Force spokesman made a statement that Tarabalk was a skilled fighter pilot who had shot down many Russian aircraft; however, he had not shot down forty aircraft and he was not the Ghost of Kyiv.

“The Ghost of Kyiv is alive and embodies a collective image of the highly qualified pilots of the tactical aviation brigade successfully defending Kyiv and the surrounding region.”

This is clearly an attempt to recast the Ghost of Kyiv as the spirit of the Ukrainian fighter pilots defending their homeland. A recently-retired US F-15 pilot interviewed by The War Zone about the skill level and the commitment of the Ukrainian pilots understood this.

“People ask me “Is there a Ghost of Kyiv?” I tell them that these pilots are all Ghosts of Kyiv. What is a ghost? It decides when it appears, you can’t harm it, and it scares the crap out of you, right? These heroic pilots are all ghosts. They are deciding when and where they will make their appearance.”

The Times of London has since replaced their expose of the Ghost of Kyiv by a new article with the same byline which explains that Ghost of Kyiv is alive in all pilots fighting for Ukraine, says air force. Note that the URL still references the original headline, although the author makes no reference to the change in content.

The Ukrainian Air Force last night said the Ghost of Kyiv was “alive” and embodied a “collective image” of Ukrainian pilots fighting Russia around the capital.

But at the same time, Violetta Kirtoka, a journalist for the Ukrainian edition of Censor.net, claimed outright on Facebook that she had spoken to the pilot. 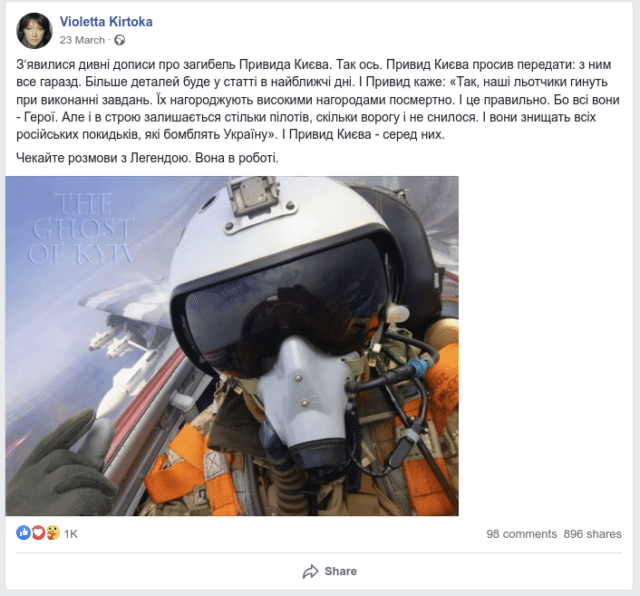 There are strange reports about the death of the Ghost of Kyiv. So. The ghost of Kyiv asked me to convey: everything is fine with him. More details will follow in the article in the coming days. And the Illusive Man says, “Yes, our pilots are dying on missions. They are awarded high honors posthumously. And that’s right. Because they are all Heroes. But even in the ranks, there are as many pilots as the enemy never dreamed of. And they will destroy all the Russian scum who are bombing Ukraine.” And the Ghost of Kyiv is among them. Wait for an interview with the Legend. It is in the works.

Last week, the Ukrainian Air Force finally said outright that there is no fighter ace known as the Ghost of Kyiv. A Facebook post took responsibility for the legend but made it clear that it was just that.

Ghost of Kyiv is a superhero-legend whose character was created by Ukrainians… a collective image of pilots of the Air Force’s 40th tactical aviation brigade, who defend the sky over the capital.

While the Russian fighter jets dominated the airspace both in numbers and in technology, the Ghost of Kyiv has been important for raising the morale and underscoring the fighting spirit of Kyiv. But now, the Air Force has stressed the importance of “information hygiene” with a plea that people to please check the sources of information before spreading news.

Some good sources for fast fact checking include:

I have also fallen for false narratives in aviation, especially when I’ve been in a hurry and not taken the time to check my sources. But in an effort to combat this, today I expanded the category of demystifying to include the pieces I’ve written to debunk internet rumours about aviation photographs and news stories.

A single unverified claim took on a life of its own, by telling the story of a 21st-century fighter ace using half-true numbers and videogame footage. Mainstream media fought to be the first to expose the true identity of the Ghost of Kyiv while officials attempted to harness the narrative as representing all of the pilots of the Ukrainian Air Force. The Ghost of Kyiv drowned out greater stories, such as that of Oleksandr Brynzhala who was shot down while he and and a second Ukrainian MiG-29 pilot bravely flew to intercept twelve Russian fighters. Hopelessly outnumbered, he shot down two enemy planes before losing his life in the battle to distract the invading aircraft.

The legend of the Ghost of Kyiv undoubtedly gave hope to the people of Kyiv and a much needed morale boost to the Ukrainian Air Force pilots risking their lives to defend their country. But when the unconfirmed story became headline news despite the lack of official sources, Ukraine concluded that the truth was more important than the romantic narrative.