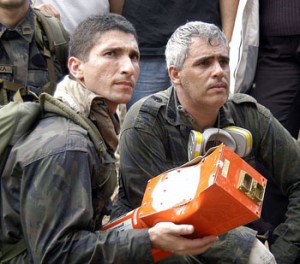 Today, aircrash investigations centre around the black box – that is, the flight data recorder (FDR) and the cockpit voice recorder (CVR). I have always thought of them as rather straight forward: one collects flight data and the other records voices in the cockpit.

However, when I started to do some research about flight recorders, I was taken aback at how much I didn’t know. Explaining my own ignorance would take more than a single blog post so I limited myself to the top five things that surprised me.

1. The very first flight data recorder was invented by the Wright brothers. They created a device which recorded propeller rotations, distance travelled and time spent in the air.

Charles Lindbergh also had a flight data recorder which was in a plywood box and inked data, including altitude, onto a paper roll. A major breakthrough took place at the Marignane flight test centre in 1939. They created the “type HB” flight recorder that kept a record on photographic film. But not until World War II did we have an FDR which was expected to withstand high-speed impact and fire. 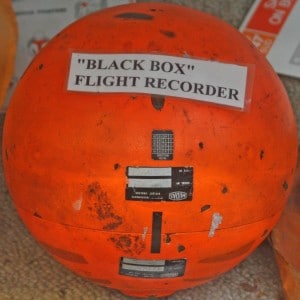 2. There’s no clear history as to why the container of flight recorders (FDR and CVR) is called a black box. A black box obviously needs to be highly visible, so it can be found amongst wreckage and even underwater. The flight recorder container has a minimum height and width and it is painted bright orange and highlighted with reflective tape.

I found a number of theories explaining why we called them black boxes, none of which seem particularly compelling:

Convinced? Me neither. Regardless, the phrase “black box” has been used within the transport industry for various forms of recording devices, including planes, trains and automobiles, since the 1940s. 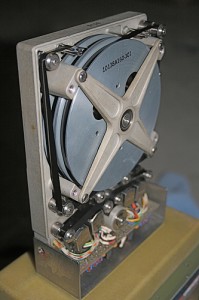 3. Australia was the first country to make cockpit voice recorders a requirement for commercial aircraft. I knew that the modern flight data recorder was effectively invented in Australia but not that the Australians the first to make flight recorders compulsory.

In 1960, a twin-engine Fokker Friendship F-27 flew into the ocean with 25 passengers and 4 crew on board. The investigation failed to find the cause and the inquiry recommended that all passenger airliners have flight recorders installed. Not long thereafter, the Brooklyn airline collision in December of 1960 was the first time that the flight recorders were critical in a crash investigation. Now I can’t imagine an investigation that doesn’t rely on the data gathered from the black boxes.

4. Recorders were originally housed in the cockpit along with the instruments and the pilots. Only after several accidents where the Flight Data Recorder was not recoverable did they get moved to the rear of the aircraft, based on the presumption that following the initial impact, the rear of the aircraft would be moving at a slower speed. In addition, the units initially only had to withstand a 100gs impact which was increased to 1000gs. 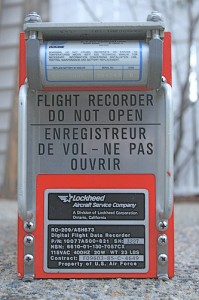 They go through a whole sequence of surviveability testing including:

Crash Impact Test — It has been agreed that 3400gs for 6.5 ms would be required to meet most accident scenarios. This test is actually performed with a cannon. A Fairchild CVR has survived a crash that was estimated to be more than 6000 gs.

Static Crush — In this test, 5,000-pound pressure is applied against all six axis points.

Pierce Test — A pierce test employs a 500-lb. weight dropped from 10 feet. It has been modified to be performed with a hardened steel pin.

It is a thin, light-weight camera with a wide-angle lens which takes photographs automatically as you go about your business. Cathal Gurrin has worn one around his neck every day for the past five years.

The SenseCam doesn’t have a viewfinder and there is no way to frame the photo. It has a fish-eye lens to capture as much of the wearer’s viewpoint as possible. It can be triggered by a timer or using internal sensors that watch for changes in light-intensity or light-colour, the wearer’s temperature, or even a change in direction/speed using a multiple-axis accelerometer. These changes can trigger a photograph to be taken.

The Vicon Revue is currently available as a commercial product for £299. It is being pitched as a memory aid for special events and to support people with memory impairments.

I don’t think I’ll be wearing a little life logger around my neck any day soon, though. It gives me the chills. Would you?